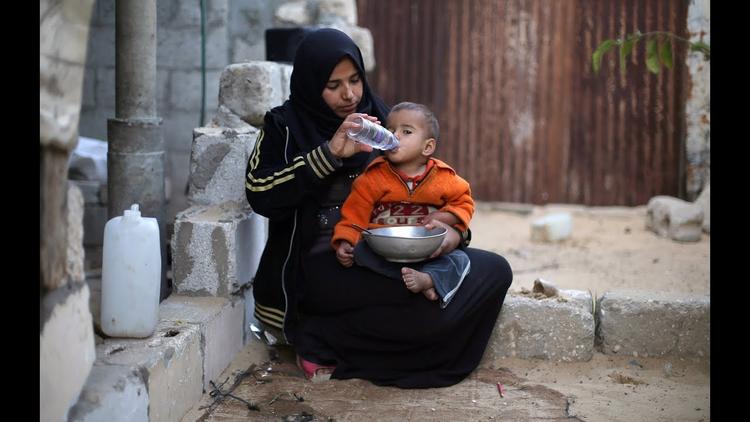 Free access to clean water is a basic human right. This is not just a common-sense assertion, but also a binding legal commitment enshrined in international law. In November 2002, the UN Committee on Economic, Social and Cultural Rights adopted “General Comment No. 15” regarding the right to water: “The human right to water is indispensable for leading a life in human dignity. It is a prerequisite for the realisation of other human rights.” (Article I.1)

The discussion on water as a human right culminated years later in UN General Assembly resolution, 64/292 of 28 July, 2010. It explicitly “recognises the right to safe and clean drinking water and sanitation as a human right that is essential for the full enjoyment of life and all human rights.”

It all makes perfect sense. There can be no life without water. However, like every other human right, it seems, the Palestinians are denied this one too.

There is a water crisis affecting the whole world, and it is most pronounced in the Middle East. Climate change-linked droughts, unpredictable rainfall, lack of centralised planning, military conflicts and more have resulted in unprecedented water insecurity.

‘Prisoners are heroes’: Being a Palestinian prisoner in Israel

The situation is even more complicated in Palestine, though, where the water crisis is related directly to the more general political context of Israel’s occupation: apartheid, illegal Jewish settlements, siege and war. While much attention has rightly been given to the military aspect of the Israeli occupation, the state’s colonial policies involving water receive far less attention, but they are a pressing and critical problem.

Ashraf Amra Indeed, total water control was one of the first policies enacted by Israel after the establishment of the military regime following the occupation of East Jerusalem, the West Bank and Gaza Strip in June 1967. Israel’s discriminatory policies – its uses and abuses of Palestinian water resources – can be described as “water apartheid”.

Gaza is in urgent need for affordable water supplies to keep up with the need of its 1.8 million inhabitants, many of whom live in poverty [file photo]

Excessive Israeli water consumption; the erratic use of dams; and the denial of Palestinians of the right to their own water or the digging of new wells, have all left vast and possibly irreversible environmental consequences. They have fundamentally altered the aquatic ecosystem altogether.

In the West Bank, Israel uses water to cement existing Palestinian dependency on the occupation. It uses a cruel form of economic dependency to keep Palestinians reliant and subordinate. This model is sustained through the control of borders, military checkpoints, collection of taxes, closures, military curfews and the denial of building permits. Water dependency is a centrepiece of this strategy.

The “Interim Agreement on the West Bank and the Gaza Strip”, known as the Oslo II Agreement, signed in Taba, Egypt in September 1995, crystallised the unfairness of Oslo I, which was signed in September 1993. Over 71 per cent of Palestinian aquifer water was made available for Israeli use, with just 17 per cent allocated for Palestinian use.

Even more appallingly, the new agreement invited a mechanism that forced Palestinians to buy their own water from Israel, further cementing the client-owner relationship between the Palestinian Authority and the occupying state.

Israel’s Mekorot water company, a wholly-owned government entity, misuses its privileges to reward and punish Palestinians as it sees fit. In the summer of 2016, for example, entire Palestinian communities in the occupied West Bank went without water because the PA failed to pay Israel massive sums of money to buy back water taken from Palestinian natural resources.

Bewildering, isn’t it? And yet many are still wondering why Oslo failed to deliver the much-coveted “peace”.

Look at the numbers in order to appreciate this water apartheid: Palestinians in the West Bank use about 72 litres of water per person per day, compared to 240-300 litres for Israelis. The political responsibilities of such unequal distribution of available water resources can be attributed to both the cruel Israeli occupation and the short-sighted vision of the Palestinian leadership.

The situation in Gaza is even worse. The territory will be officially “unliveable” by 2020, according to a UN report. That’s next year. The main reason for this grim prediction is Gaza’s water crisis.

According to a study conducted by international charity Oxfam, “Less than four per cent of fresh water [in Gaza] is drinkable and the surrounding sea is polluted by sewage.” Oxfam researchers concluded that water pollution is dangerously linked to a dramatic increase in kidney problems in the Gaza Strip. Gaza’s water and sanitation crises are worsening as frequent shutdowns of the enclave’s only functioning power plant are killing any hope for a remedy.

The US-based RAND Corporation found that one-fourth of all diseases in the besieged Gaza Strip are waterborne. RAND estimations are no less dramatic. It reports that, based on World Health Organisation (WHO) standards,

The hospitals in the Gaza Strip are trying to fight the massive epidemic of illness and disease caused by dirty water while underequipped, suffering electricity cuts and lacking any clean water themselves. “Water is frequently unavailable at Al-Shifa, the largest hospital in Gaza” the RAND report

According to the environmental media platform Circle of Blue, out of Gaza’s 2 million residents, only 10 per cent have access to clean drinking water.

“My children get sick because of the water,” Madlain Al-Najjar, a mother of six living in the Gaza Strip, told Circle of Blue. “They suffer from vomiting and diarrhoea. Often, I can tell that the water is not clean, but we have no other option.”

Britain’s Independent reported on the story of Noha Sais, a 27-year-old mother of five, living in Gaza. “In the summer of 2017, every one of Noha’s children suddenly fell ill, uncontrollably vomiting and were soon hospitalised. Gaza’s filthy Mediterranean waters had poisoned them.

The unfinished Gaza war: What Netanyahu hopes to gain from attacking Palestinian prisoners

“The youngest, Mohamed, normally a healthy and boisterous five-year-old, contracted an unknown virus from the sea, which took over his body and brain. Three days after the trip, he slipped into a coma. A week after that he died.”

Noha told the newspaper that, “The doctors said the source of the infection was a germ that came from the polluted seawater, but they couldn’t work out exactly what it was. They just said to me even if my son recovered, he would never be the same – he would be a vegetable.”

Many similar cases are reported across Gaza, and there is no end in sight. Israel’s water policies are facets of a much larger war against the Palestinian people intended to reinforce its colonial control.

Judging by the evidence, Zionists didn’t “make the desert bloom,” as Israeli propaganda claims. Since its establishment on the ruins of more than five hundred Palestinian towns and villages destroyed between 1947 and 48, Israel has done the exact opposite.

“Palestine contains vast colonisation potential which the Arabs neither need nor are qualified to exploit,” wrote one of Israel’s founding fathers and first Prime Minister, David Ben Gurion, to his son Amos in 1937. Zionist Israel, though, has done more than just “exploit” that “colonisation potential”; it has also subjected historic Palestine to a relentless and cruel campaign of destruction that is yet to cease. This is likely to continue as long as Zionism prevails in Israel and occupied Palestine; it is a racist, hegemonic and exploitative ideology. If access to clean water is indeed a human right, why is the world allowing Israel to make Palestine and its people an exception?