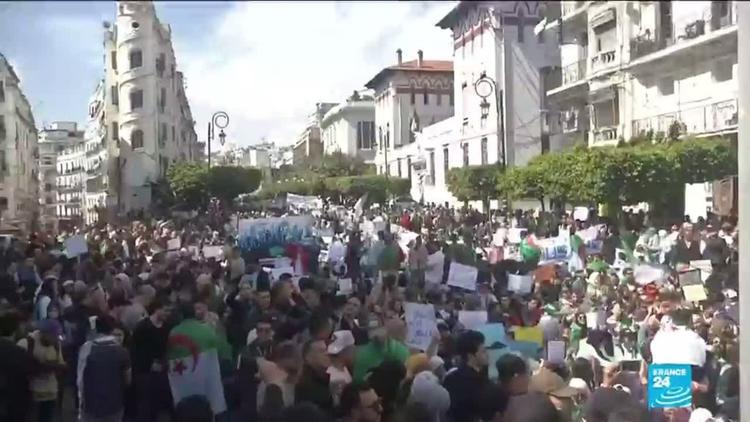 International Institute on Nonviolent Conflict | Minds of Movement ) – Since late February, Algerians have been protesting every Friday on the streets of the capital Algiers and other major cities to demand the departure of the regime that has ruled the country since independence in 1962. Friday protests are accompanied by daily demonstrations organized by students, lawyers, doctors, people with disabilities, and others.

The record so far is impressive: In just six weeks, Algerians have not only forced their long-term serving president to renounce pursuing a fifth term in office, but also obtained his resignation. Equally remarkable, Algerians have reclaimed ownership of public space to voice their political demands.

In addition, the movement has gained both the attention and admiration of local authorities, as well as observers from around the world, because it has remained largely peaceful—parting with violent episodes in the country’s recent history and most of the region’s “Arab Spring” revolutions in 2010-11. Moreover, Algerian protesters, especially the youth, for the first time, are adopting innovative nonviolent tactics to express dissent and highlight the generational gap that separates them from the aging ruling elite.

Algeria: A Long and Ambivalent History of Political Violence

The Algerian people are not accustomed to turning to nonviolent resistance to achieve political change. The country’s history is filled with episodes of armed resistance against foreign military conquests, violent liberation struggles, and troubled political and social movements.

Algeria was one of the few countries in Africa to gain its independence from France after waging a bloody revolutionary war. The struggle lasted for more than seven years and claimed the lives 1.5 million people, according to various estimates. In the 1960s and 70s, Algeria was considered the Mecca of revolutionary and resistance movements against colonialism and Apartheid regimes in Africa and the Middle East. This historical legacy remains vivid today in Algerians’ memory, even among the younger generation. Historical figures such as Djamila Bouhired, one of the heroines of the battle of Algiers (1956-1957), who joined demonstrators as early as the second week of the recent protests, significantly boosted the strength and confidence in the movement. Her support helped position the movement along the same historical path as the independence struggle and also highlighted its patriotic aspect, appealing in particular to the older and more conservative sections of the population.

More recently, Algeria also witnessed a more controversial episode of political violence known domestically as the “dark decade.” The civil war in the 1990s between the government and extremist groups resulted in the disappearance and killing of hundreds of thousands of combatants and civilians, which undermined trust among Algerians aspiring to organize for political change. It is widely believed that this living legacy prevented Algerians from following other Arab country citizens to the streets in 2011. This belief also explains why researchers, policymakers, and even Algerian authorities failed to anticipate the current uprising. Many assumed that Algerians were still in a state of post-traumatic shock from the civil war, and that this was keeping them away from politics and organizing large protests that could destabilize the country.

After six weeks of continuous protests, the commitment of demonstrators to nonviolent discipline has remained strong despite growing frustration over authorities’ inaction. Two characteristics of recent mobilization attest to a widespread commitment to nonviolent discipline: first, the large number of demonstrators, and second, the presence of families, with elderly people, women, and children among them. Security services tasked to disperse the demonstrations were taken by surprise by the number and composition of protesters. They could not use the traditional repressive tools at their disposal to maintain law and order. After a few days of protest, it became clear that only a political response could appease the street mobilization.

Moreover, young protesters have adopted the motto silmya, silmiya (“peaceful, peaceful”) and “Djeich Chaab Khoua khaoua” (army, people, brothers, brothers) when standing off to security forces. They maintain a peaceful demeanor, having learned how to do so during soccer games when encountering police. They also take precautions to prevent infiltration of violent actors who could provoke security services. One such precaution is to self-guard their own ranks and physically stop and surrender the violent elements to the police in case of clashes. They also share on social media guidance for how to react in case of violent clashes during demonstrations, as well as photos of known violent individuals.

Also, protesters are reclaiming national symbols that are usually associated with the ruling political parties. This nonviolent method demonstrates that protesters place national interest and unity above other considerations. Only the national flag and patriotic songs are admitted in and during demonstrations. At this stage, opposition political parties and civil society organizations have been accepted to join the movement only as individuals in order to maintain unity and avoid claims of partisan group co-optation.

Finally, humor has been widely present in the recent uprising. Since day one, young people have used satire to communicate their grievances—including in different languages to both domestic and international audiences. Political signs mimicking international brands, movies, and products are visible in the streets of Algiers and other cities. This method aims to connect protesters’ demands to mainstream culture in their country and around the world.

One light-hearted episode took place when hundreds of Algerians inundated the Swiss institution where President Bouteflika was hospitalized with courtesy calls, emails, and Facebook messages inquiring about the leader’s health. The campaign forced the hospital to increase staff and temporarily discontinue their phone service and Facebook page. The same tactic was used to express outrage following French President Macron’s endorsement of President Bouteflika’s transition plan.

For many Algerians, revolting this time against the system has the personal and collective virtue of self-awakening. When asked at the beginning of the movement why they decided to take to the streets, many Algerians spoke of how much they felt individually humiliated by the president’s decision of to run for a new term despite his deteriorating health condition. Moreover, they expressed a desire to reflect a more positive image of their country to the rest of the world. This civil consciousness helps to understand why they decided to systematically adopt the exact opposite behavior to the one expected from them. The goal here is to show the local authorities and the rest of the world the extent of the people’s civility, and their aptitude to run their own affairs and democratically elect their representatives.

For example, when the government decided to extend university holidays for two weeks in order to weaken the protests, professors rejected the decision and kept the universities open—and students continued to show up for class. On social media, demonstrators also exchanged tips on how to dress and behave appropriately during the protests.

People are widely circulating videos and images online of young protesters cleaning up the streets after each demonstration, as a way to counter the common accusation that Algerians don’t care about the environment.
Finally, Algerians are turning demonstrations into gigantic, cheerful events to reclaim the public sphere as a space to meet, debate, and build new networks for future collaborations. Each Friday, volunteers prepare and serve couscous, the national dish, to protesters on the streets, along with bottles of water and vinegar to be used in case of tear gas. Amateur actors perform sarcastic plays outdoors, and it is not rare to see couples dancing on the streets during protests.

Whatever the future holds for the “smile” or “happy” revolution (as some have nicknamed it), what is certain is that change is in the realm of possibility today—and Algerians have chosen the path of nonviolent civil resistance to achieve it.

Mohamed Nabil Bennaidja is a second-year candidate of a Master of Arts in Law and Diplomacy at the Fletcher School of Law and Diplomacy, Tufts University (USA), concentrating on conflict resolution and international negotiation with a regional focus on Sub-Saharan Africa.

Via International Institute on Nonviolent Conflict | Minds of Movement

This work is licensed under a Creative Commons Attribution-NonCommercial-NoDerivatives 4.0 International License

International Center for Nonviolent Conflict is proud to present Minds of the Movement. We write for those interested in the ideas and experiences of people on the front line of civil resistance, and those who seek to understand the art and science of nonviolent struggle. Ours is a forum for people interested in this growing field, including activists, scholars, students, journalists, and members of the INGO and policy community.