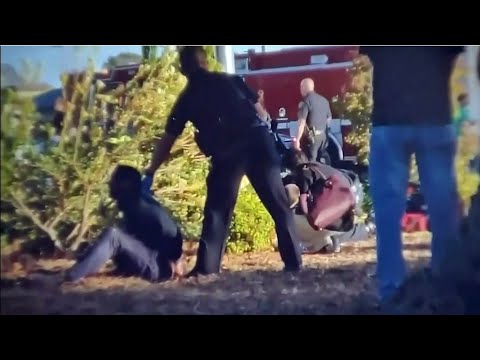 Ann Arbor (Informed Comment) – An Iraq War veteran, who had spent 5 years in that country, was arraigned Friday. On Tuesday, he had plowed into 8 people in an intersection in Sunnyvale, California, particularly aiming at a South Asian family who he assumed to be Muslims. They weren’t. The names indicate that they are Americans of Indian Hindu heritage (a minority in the US of about 1 million people). The veteran has been charged with a hate crime and with 8 counts of attempted murder.

The victims included a 13-year-old girl, Dhriti and her father; her young brother Prakhar, 9, was hurt, but not by the car. Dhriti experienced swelling of the brain and bleeding, so that physicians had to take off the side of her skull, and she is fighting for her life in critical condition. Others hurt by the car ramming were Marina Reimler, 32; Soeren Reimler, 33; Ping Lu, 51; Rajesh Narayan, 45; Eric Nava, 24; and Miguel, 15.

Ramming non-combatant pedestrians with an automobile is an ISIL tactic, showing the way in which America’s forever wars are turning its best and brightest into mirror images of their enemy. It is also a sign that the enemy is winning.

The enraged vet managed to wound Americans of German, Indian, Chinese and Latino heritage in his fruitless search for other Americans to kill, of Muslim heritage.

This heartless crime did not come out of nowhere but is a testimony to nearly two decades of constant warfare and demonization of ordinary Muslims by some in the US elite (including Trump). That the intended crime so badly misfired is a good metaphor for the way hatred directed by any Americans at any other group of Americans inevitably harms us all.

Nowadays it is Trump who is associated with rapacious white nationalism that is contemptuous of the lives and rights of those not coded as “white” or rich (and whiteness has always been constructed around the propertied classes). The George W. Bush administration, despite some cynical tokenism, however, was also all about white privilege.

The 2003 Bush-Cheney war on Iraq (it was a war on Iraq, not in Iraq) was fought on false pretenses– that dictator Saddam Hussein had anything at all to do with 9/11 or that he had advanced and sophisticated nuclear and biological weapons programs and was within 2 years of having a nuclear bomb. It militarized America’s civilian society, sending hundreds of thousands of Americans over time to a major Arab Muslim country where they lorded it over the brown locals as the new district commissioners of a new colonial empire.

The Iraq War brutalized Iraqis, leaving hundreds of thousands dead, millions wounded or orphaned, and 4 million displaced from their homes. The tsunami that hit the society swept away old authority structures and led to the proliferation of anti-imperial militias and ultimately to terrorist groups like al-Qaeda in Mesopotamia, members of which the US military imprisoned with 25,000 others in Camp Bucca, introducing them to one another. It morphed into the so-called Islamic State group (ISIL or Daesh) and tore Iraq and Syria apart in 2014 and after.

At the same time, hundreds of thousands of Americans cycled through Iraq. Some 80,000 were at least slightly injured, and 12,000 were so seriously wounded they will need special medical care the rest of their lives. More tens of thousands were harmed by Post-Traumatic Stress Disorder, with some driven to drink and homelessness. Suicide rates are high because of the things these young persons were ordered to do or found themselves in a situation where they felt constrained to do them. Some of them were grouped in with sadists and serial killers who had themselves a grand old time on the killing fields of Iraq. As the 8 and a half-year-long nightmare rolled on, Bush-Cheney started letting white supremacists with gang tats into the US army, something that would have been unthinkable in previous decades.

Hatred of Muslims was bound to grow up if the enemy was year after dreary year drawn from their ranks. Given that Americans had gone to a Muslim country and occupied it, resistance to occupation was inevitable. Just imagine that a foreign country occupied Alabama or Kentucky– what do you think their citizens would do to those troops from abroad who didn’t even speak English but now ran the lives of the locals.

Bush-Cheney turned our police into commandos in full battle gear and provided them with armored vehicles, helping provoke the Black Lives Matter movement. They turned our young men into PTSD basket cases or professional sadists or even war criminals (some of them have gone into politics and risen high). And they turned many in the general population into bigots with an irrational hatred of Muslims, weirdly conflating white Sufi converts, Bangladeshis, Iranian secularists in LA, and Bosnians from eastern Europe fleeing Christian genocide with Iraqis and Afghans who objected to having foreign troops in their country.

The ISIL-style ramming of innocent civilians in Sunnyvale is a metaphor for what the United States has become.

But we do not have to be this person. We could be real Americans if we wanted, and bring the troops home, and stop finding the latest ethnic group to hate so that our diverse society can be divided and ruled by the likes of Trump and Mercer and Murdoch and other pond scum.