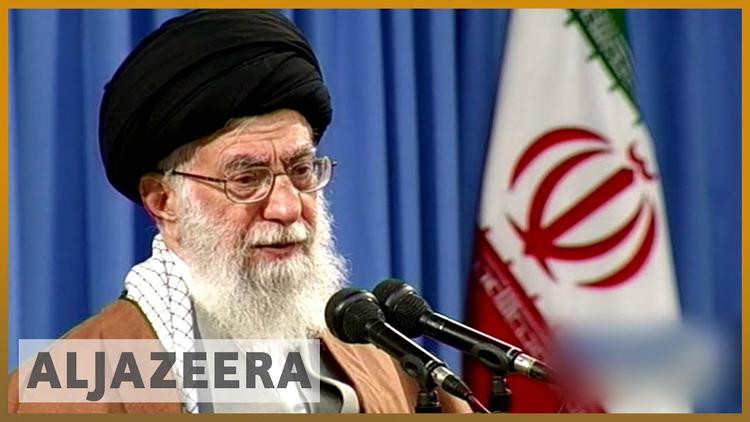 “It underscores the fact that Iran’s actions are fundamentally different from those of other governments,” U.S. President Donald Trump said in an April 8 statement.

His secretary of state, Mike Pompeo, said the move was aimed at increasing pressure on Iran and diverting some of the financial resources it allegedly uses to fund terrorism and militant activities.

The designation, effective on April 15, is a significant symbolic departure and will result in economic and travel sanctions for the IRGC — a branch of the Iranian armed forces — and for individuals and entities associated with the so-called Guards.

Experts say it could also increase the risk of a hostile encounter between Iranian and U.S. military forces.

But let’s start with the basics.

The IRGC was created after Iran’s 1979 revolution to protect the new Islamic establishment against internal and external threats and to preserve revolutionary ideals.

Under the rule of Supreme Leader Ayatollah Ali Khamenei, to whom the IRGC has answered directly since he ascended to Iran’s highest post in 1989, its influence has arguably increased.

Domestically, the Guards’ forces have been involved in enforcing Islamic codes and crushing dissent. Even very recently, its intelligence branch has been reported to be behind the arrests of several Iranian-Americans and environmentalists.

By targeting the IRGC, one of Iran’s most powerful state institutions, Trump intends to raise the heat on Iran.

The move is part of his administration’s comparatively hard line on the Islamic republic, beginning with Washington’s withdrawal from the 2015 nuclear deal between Tehran and world powers and the subsequent reimposition of tough economic sanctions that appear to have hurt Iran’s currency and its economy.

In announcing the designation, Trump said this “action will significantly expand the scope and scale of our maximum pressure on the Iranian regime.”

U.S. officials have said that their “maximum pressure” approach is aimed at persuading Iran to return to the negotiating table, although some have interpreted it as a campaign for regime change.

Analysts, including Rand Corporation’s Ariane Tabatabai, predict that the IRGC designation will make it more difficult for Iran to return to the negotiations. “The administration is looking to build a comprehensive pressure campaign, which seems to aim to either force Tehran to fundamentally change its behavior or to pave the way for an internal collapse of the regime,” she says.

The IRGC plays an important role in Iran’s economy. It is also in charge of Iran’s controversial missile program, which just last month a U.S. official said threatened to spark a “regional arms race.”

The IRGC’s involvement in Syria in support of Syrian President Bashar al-Assad through its Quds Force, as well as alleged operations in or involving Iraq, Afghanistan, Lebanon, and Yemen, have also threatened perceived U.S. interests.

The group is estimated to have between 100,000 and 150,000 members, and has reportedly recruited thousands of Afghans and Pakistanis to fight in Syria, where Tehran has been allied with Assad and Russia to oppose antiregime forces that it regards as terrorists.

“The IRGC is not a conventional military force; they are a largely asymmetric force created to balance the conventional Iranian military. As a result, the tactics they employ, and their toolkit, make them a different kind of challenge to the United States,” Tabatabai says.

How Could The Designation Help The U.S.?

The IRGC and its parts — including, the elite Quds Force — are already facing U.S. sanctions over alleged support for terrorism, human rights abuses, censorship, malign cyberactivities, and Iran’s ballistic-missile program. The U.S. Treasury Department labeled the IRGC as a terrorist group in 2017.

The FTO designation raises further obstacles to doing business with Iran. But since punitive measures already in place by the United States include sweeping financial sanctions, analysts say its impact could fall short of administration hopes.

“The designation is more political and symbolic than it is impactful economically or operationally. The U.S. objective is to make it harder for the IRGC to operate beyond its borders and to delegitimize it internally, and the designation is a tool to achieve these objectives,” Tabatabai says.

What Are The Risks?

In a tit-for-tat response, Iran’s Supreme National Security Council announced that the United States would itself be designated a “state sponsor of terrorism,” and Centcom, which oversees U.S. military operations in the Middle East, would be designated a “terrorist group.”

It is unclear how such designations will be enforced in the Persian Gulf and in countries such as Iraq.

Analyst Tabatabai says the risk of the new designation is related to uncertainty. “We’ve never done this before, and there’s an inherent risk associated with doing something you’ve never done before,” she says.

She adds that Iran’s decision to reciprocate “will provide more of a free hand to their own forces and the operatives and terrorist groups they support to target U.S. military personnel, contractors, and others,” and could make it “more difficult to deescalate situations in the Persian Gulf.”

The United States has in the past accused Iranian naval forces of provocations in the Persian Gulf, including failing to observe internationally recognized maritime customs by getting too close to U.S. vessels. The incidents have involved the IRGC, which in 2016 captured and detained 10 U.S. sailors who entered Iran’s territorial waters.

“The designation could make U.S.-Iranian interactions more dangerous, particularly in Iraq and the Persian Gulf,” Afshon Ostovar, an assistant professor of national security affairs at the Naval Postgraduate School in Monterey, California and author of a book on the rise of the IRGC, says.

Ostovar adds that the risks will depend on how Iran decides to respond. “If it takes any direct action or action by proxy, then it could more quickly lead to escalation. I don’t believe this will happen, but it’s a possibility U.S. forces in the Middle East will have to prepare for,” he says.

Ali Vaez, the Iran project director at the International Crisis Group, says he believes the designation raises the risk of a direct military confrontation between the two countries. “Some in the Trump administration appear determined to provoke the IRGC into committing a mistake that would then justify taking military action against Iran,” Vaez says.

Are There Domestic Consequences For Iran?

The blacklisting of the IRGC has resulted in a show of support and unity inside Iran, where lawmakers attended an April 9 parliament session wearing the uniform of the Guards.

Leading reformist lawmaker Mahmud Sadeqi, an outspoken critic of hard-liners, was among those expressing support for the IRGC.

“I am also a guard,” the reformist daily Etemad said on a front page that features a picture of IRGC members.

The designation could make any criticism of the IRGC even more difficult, as critics are likely to be accused of siding with the U.S and supporting Washington’s tough line on Iran.

It could also complicate purported efforts by Iranian President Hassan Rohani to restrict the group’s role in the economy.

The impact of the U.S. designation on the many tens of thousands of Iranians who have served their mandatory military service in the IRGC is not immediately clear. They include intellectuals and members of the opposition.

Award-winning exiled Iranian journalist Akbar Ganji served in the IRGC during the 1980-88 war with Iraq. Ganji, who was jailed in Iran for six-years, now lives in the United States.

“Those who have served in the IRGC could be considered as having been in a terrorist organization, at least by the United States,” says analyst and author Ostovar, who adds that the designation will make it difficult for former members of the IRGC to obtain U.S. visas.

Iranians are already among the citizens of seven countries who face a U.S. travel ban enacted in 2017.