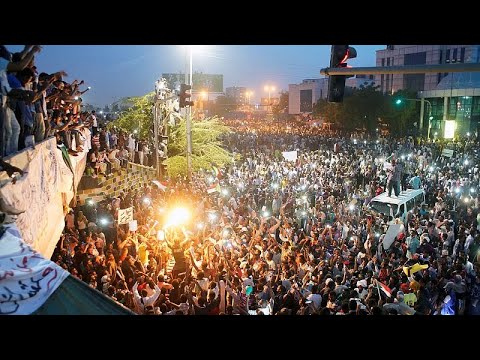 Ann Arbor (Informed Comment) – Omar Hassan al-Bashir, b. 1944, has been deposed as president of Sudan in the wake of a military coup, according to Alarabiya (United Arab Emirates). Alarabiya also says that current and former government officials have been detained by the coup-makers. As I write, the state television has gone blank and is playing military marches.

During the past week, demonstrators have rallied outside the presidential palace itself, and there have been reports of army elements siding with the demonstrators.

On Thursday morning, tens of thousands of Sudanese poured into the streets of Khartoum. People were saying “The youth are well, God willing!” and praising the country’s revolutionary youth, in scenes reminiscent of 2011 in Egypt and Tunisia.

Update: the Sudanese military announced Bashir’s arrest Thursday, and said an interim military council will tule for two years. It is unclear whether the mobilized demonstrators will accept this plan.

Since mid-December, Sudan has be roiled by massive demonstrations, initially organized by the Sudanese Professionals’ Society and carried forward by youth and by women. Sudan’s fundamentalist Muslim government has been highly patriarchal, and the demonstrators have prominently included women such as Alaa Salah.

Alarabiya is saying that the Sudanese Professionals’ Society is rejecting the notion of replacing one military dictator by another and wants an interim civilian government. It says that negotiations are continuing on Thursday morning Sudan time toward the formation of a transitional council.

Other Sudanese interviewees on Arabic satellite stations are speaking of the need for “Islamic democracy.”

Bashir, a former officer, was part of a 1989 military coup that installed the National Islamic Front, a branch of the Muslim Brotherhood, in power, making Sudan the second Islamic Republic in the ideological sense after Iran. In the 1990s, the officers deferred on implementation of what they conceived of as Islamic law to ideologue Hassan Turabi. Turabi and Bashir fell out, however, in the late 1990s. Thereafter Sudan retained its pro-fundamentalist policies but without a major individual religious leader.

The north of the country is more influenced by the Brotherhood and by Saudi-style Salafism, a rigid approach to Muslim law and practice. South of Khartoum, however, a lot of people are Sufis, who reject the dry legalism of the north and practice ecstatic dancing.

In 1992-1996 Sudan hosted Usama Bin Laden, for which it was designated by the US as a state sponsor of terrorism in 1993. Sudan has not actually sponsored terrorism in the past couple of decades, but the US kept the designation in place. The designation of a state or entity as “terrorist” by the US government is often a political calculation not necessarily grounded in much reality. As it turned out, the American hostility to Sudan’s Muslim fundamentalist government and the branding of it as a state sponsor of terrorism has had a horrible economic impact on ordinary Sudanese that to some extent led to the current crisis. The US had been negotiating an end to the designation, but not quickly enough for Bashir to survive. The country is $50 billion in debt and cannot secure new loans because of the terrorism designation.

In the first decade of the 21st century, Bashir pursued two brutal wars. One was against the Fur tribes of the country’s west, who are Muslims but who speak a Nilo-Saharan language that some linguists link to Maasai and Luo in Kenya. (President Barack Obama’s father was Luo). The other was against the Christians and animists of the south. Bashir was indicted by the International Criminal Court for war crimes in Dar Fur, for deploying the Janjaweed Arabic-speaking militia against the Fur dissidents in the West, which led to massive displacement and death. The ICC ultimately let the charges lapse on the grounds that the UN member states had done nothing to help the ICC practically prosecute Bashir.

The literacy rate of the country has actually declined from 61% (which wasn’t very good) in 2000 to 58% today. I take that as a proxy of bad governance, when key indicators are going backward like that.

The installation by Bashir of political Islam in Sudan doomed the country and thereby doomed Bashir. This is very much a Greek tragedy, where the protagonist’s tragic flaw brings about his downfall. About a fifth of the country before 2011 had been the largely Christian and animist south, where Turabi tried nevertheless to impose his vision of Islamic law. There had long been a secessionist movement in the south, but the turn of Khartoum to political Islam made it impossible for the largely Christian Dinka and Nuer tribes of the south to accept continued membership in the country. They fought the north to a standstill, achieving an armistice in 2005, and by a referendum in 2011 the south voted to secede.

Here’s the problem: Bashir may not even have been all that invested in keeping 11 million Christians and animists in his country, which became 97% Muslim after the secession. But the pull-out of South Sudan took with it 3/4s of Sudan’s oil, which had largely been down south.

The hope initially was that Sudan would still get a share of oil profits because the pipelines went north through Sudan proper. But then the Christian Dinka and Nuer fell into a brutal civil war and not much oil was exported, hence no tolls.

Petroleum had been the major earner of foreign exchange. Sudan is down to only 7 weeks supply of foreign currency reserves for imports. In part as a result, the country has been subjected to high inflation rates and a distinct fall in the standard of living of those Sudanese who consume imports.

Sudan is a significant country of about 40 million people; that is, it is slightly larger than Canada and Poland, and slightly smaller than Spain and Argentina.

The International Monetary Fund pegs Sudan’s gross domestic product at around $200 billion (purchasing power parity), 66th in the world (sort of in the range of Ecuador, Angola and Azerbaijan). But its per capita GDP (PPP) is only about $4,500 a year, 137th in the world (in the range of Cambodia, Bangladesh and Honduras).

Sudan’s development has clearly been held back by the Bashir dictatorship, as well as by US sanctions and the ‘state sponsor of terrorism’ designation. Minorities like the Fur have been targeted for genocide, and the Christians of the south driven to secede, taking their oil wealth with them.

Political scientists have found that that poor countries’ attempts to move to democracy are significantly less successful than those of rich countries. (Compare Spain and Taiwan on the one hand to Egypt and Mali on the other). Still, that finding only tells you that Sudan’s professionals, middle classes, students and outspoken women face a difficult challenge. It doesn’t tell you that they can’t succeed.