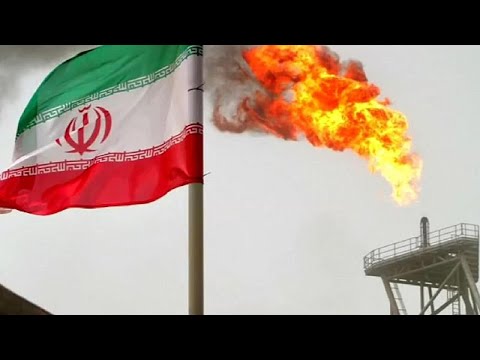 The Trump administration announced Monday that it would cease granting waivers to countries allowing them to buy Iranian petroleum as of May 2.

Iran is only exporting 1.1 million barrels of petroleum per day, down from 2.5 million before the Trump administration violated the 2015 Iran deal and imposed unilateral severe sanctions. Secretary of State Mike Pompeo says he wants to take the exports down to zero. He and National Security Adviser John Bolton are warmongers toward Iran, and the measure was pushed by Sen. Ted Cruz. Israeli Prime Minister Binyamin Netanyahu, who daily commits crimes against humanity in the Occupied Palestinian territories, expressed his pleasure with the move.

The legitimacy of these US sanctions is rejected by the European Union, the UN Security Council, Turkey, Russia, China and India, and of course by Iran itself..

The US Treasury Department’s Office of Foreign Asset Control maintains that since petroleum trades are done in dollars and through US banks or US-affiliated banks, it has jurisdiction when, say, India or China buys oil from Iran.

Understandably, Iran and its trading partners do not believe that the United States has jurisdiction over their bilateral trade.

The US charges Iran with supporting terrorism, but these charges are frankly political. The major terrorist group, ISIL, was defeated in Iraq only with substantial Iranian assistance. Iran’s ally, the Lebanese Hizbullah, pushed back the al-Qaeda affiliate in Syria at a time when Israel was supporting it in the Golan and the CIA was funding its battlefield allies. So which are the terrorist-backing states?

Theoretically, firms could escape US sanctions if they traded in, e.g. euros or Chinese yuan, used a bank exchange mechanism not under US control, and themselves did no business with the US. Before the US started using the dollar’s position as the world reserve currency for playing such politics, meeting those three conditions would have been extremely difficult.

Now, however, countries under threat of unilateral US sanctions are beginning to develop mechanisms to avoid US control over their trade with third parties. The European Union has established Instex a bank and exchange that allows European concerns indirectly to trade with Iran. Its directors have diplomatic passports so that the US cannot indict and extradite them, and Instex does not deal in dollars or use the US-dominated SWIFT banking exchange. It is for the moment only capitalized at $1 billion, but US officials worry that Russia and China will join it and use it to replace SWIFT and the dollar over the long term.

Likewise, China’s Kunlun Bank has announced that it will continue to engage in banking exchanges with Iranian banks that are not under US sanctions, with the implication that China will use Kunlun to continue to import Iranian petroleum without any US waivers.

A Chinese banking interface with Iran will not be a bilateral one. Pakistani firms hope to trade with Iran through China.

Turkey has already protested the no-waiver policy and Turkey does billions in annual trade with Iran that it is unlikely to give up.

Pompeo says that the US, Saudi Arabia and the United Arab Emirates will put an extra 1.1 million barrels a day on the world market, which countries like Turkey, India and China can buy instead of Iran’s crude. But despite what oil boosters keep saying, the US still imports 2.6 million barrels a day, and much of the fracked oil that has upped US production dramatically is in shallow fields expected to go dry in the 2020s.

Oil markets are determined by supply and demand. Pompeo can’t actually control either, since you cannot predict crises in places like Venezuela and Libya, and you have to reckon with spikes in demand in Asian countries where peasants are giving up bicycles for cars. China’s imports are up substantially over 2017 (up 30% in December year on year and 12% in January and February), and China is now importing over 9 million barrels a day. It is the largest importer in the world.

So whether the US, the UAE and Saudi Arabia can actually replace the 1.1 million barrels a day exported by Iran is difficult to know.

Even if the US and its Gulf allies could replace Iran’s petroleum reliably, they can’t make marketed oil cheaper than discounted black market oil, and Iran will just go to the latter. Refined petroleum products are easy to smuggle. Barrels can be put on the back of small trucks and sent to Turkey, Afghanistan, Armenia and Pakistan. It can also be loaded onto small vessels in the Gulf and then sent anywhere in the world. Iranian oil can also be relabeled as Iraqi or other by corrupt officials. While this way of proceeding much reduces profits for the producing country, it means that cutting off the money flow entirely is extremely difficult.

Also, it is worth mentioning that Iran is a country of 80 million with a complex economy that in some ways is held back by the petroleum. A valuable primary commodity like oil hardens a country’s currency, which makes its exports (raisins, saffron, pomegranates, pistachios, carpets, factory-made goods) expensive for markets like India. If the US really could reduce Iran’s oil exports significantly, it would be doing Iranian farmers and factories a huge favor, since likely the rial would fall in value against the currencies of potential importers. Turkey does not have oil but has managed to rise into the G-20, the world’s twenty largest economies. Certainly, being weaned off petroleum would be extremely painful for Iranians in the short term, but there may be major benefits in the medium to long term.

For one thing, automobile electrification and use of solar and wind to charge the car batteries will mushroom over the next decade, which means that the oil business has a limited shelf life anyway, and Iranians might as well find something else to do in life.

That Trump will be able to overthrow the Iranian government in this way seems doubtful, though the US and Britain did pull off something like it in 1953. Note that the US and Britain only got what they wanted for 15 years before the Islamic Republic arose to give them a major decades-long headache. They’d certainly have been better off leaving the Mosaddegh government alone. Lord knows what monstrosity yet another US coup in Iran will produce. But perhaps the way Bush managed to create ISIL by overthrowing Saddam Hussein can give us an inkling.