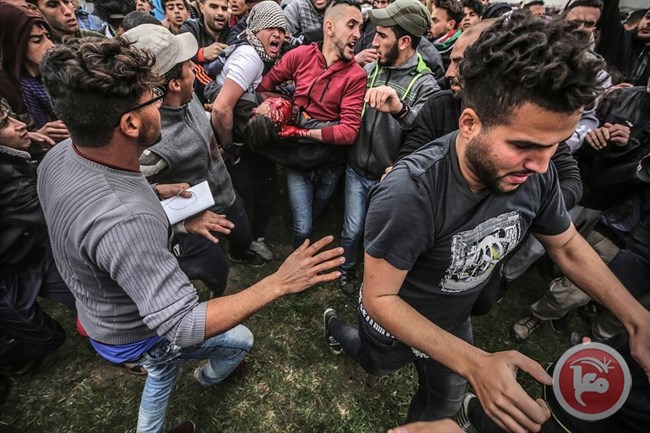 Despite Israeli efforts to deter Palestinians from taking part in this weekend’s Great March of Return, and in spite of the cold weather conditions which prevailed, a tsunami of demonstrators flocked to Gaza’s 25-mile-long fence. Heavily-armed Israeli forces fired live ammunition at protesters, who came in their thousands to mark one year since the start of the marches.

Four Palestinians were killed and dozens injured by Israeli gunfire and tear gas inhalation. The heavily-armed Israeli forces, backed by tanks and warplanes, justified their actions by stating that the protestors came close to the fence, violating a 300-metre enforced buffer zone and hurling stones at soldiers and snipers.

Crowds started marching in the early hours of today towards Essilik – Arabic for fence – carrying Palestinian flags to mark Land Day, known locally as “Yawm Al-Aard”. Land Day commemorates the 1976 protests against Israel’s appropriation of Palestinian land, in which six unarmed Palestinians were killed and around one hundred others were wounded.

People from all walks of life took part in what was dubbed the “Million Man March,” gathering in five locations along the fence that separates the besieged Strip’s two million people from their ancestors’ lands. The coastal enclave is surrounded by an armistice line enforced after the 1948 War, and reinforced after the Six Day War of 1967 – referred to by Palestinians as Naksa, meaning setback.

The head of Hamas’ military wing, Yahya Al-Sinwar, took part in the day’s protests, showing no fear of being assassinated by Israel. A day earlier, the armed wings of the Palestinian resistance factions warned Israel against killing the protestors en masse.

Certainly, Israeli Prime Minister Benjamin Netanyahu and the Israeli army’s generals were monitoring the developments. Netanyahu said the military reinforcements deployed along the fence earlier this week could be used to wage a large-scale invasion of the Strip, if the security situation deteriorated.

The Great March of Return protests – which have continued every Friday for the past year – have seen 267 Palestinians killed, including 20-year-old Mohammad Saad who was killed this morning, bringing the number of youths killed by Israeli snipers to 51. In addition to a further 30,000 injured by live ammunition, rubble-coated bullets and subjected to tear gas suffocation, many have been left with permanent disabilities. Let’s not forget that two journalists and three paramedics were among those killed. A United Nations investigation into Israel’s response to the Great March found that its forces have committed human rights violations that may amount to war crimes.

No one denies that the humanitarian situation in Gaza is catastrophic as a result of Israel’s 12-year-old siege, made worse by sanctions imposed by the Palestinian Authority (PA) which has cut the salaries of thousands. Israel was hoping that the spontaneous protests waged across Gaza nearly two weeks ago would bring an end to Hamas’ rule. The prolonged siege has had disastrous consequences, while the Egyptian-mediated efforts to secure a long-term ceasefire that would bring an end to the strangulating land and sea blockade have, as yet, not achieved their aims.

The Great March of Return was initiated in the wake of USPpresident Donald Trump’s decision to recognise Jerusalem as the capital of Israel and move the US embassy from Tel Aviv to Jerusalem in May. It was the bloodiest day of the Great March of Return, in which over 60 Palestinians were killed as they took to the fence to mark Nakba Day, which commemorates the catastrophe of 1948 when Palestinians were forcibly displaced from their historic homeland.

“Our demands are simple and honourable, we want to return, we want a dignified life. Even those engaged in armed resistance have started to understand how effective peaceful, nonviolence can be,” Ahmed Abu Artema, the founder of the Great March of Return recently told a media outlet.

Easing of the blockade in return for calm

Earlier this week, in the wake of a renewed Israeli bombardment of Gaza, Egyptian mediators stated that Israel is willing to offer Gaza economic incentives in exchange for its commitment to end the Great March. Israel’s proposal included, among other things, an increase in the number of goods trucks entering the Strip; an increase in the fishing zone to 12 miles; and an improvement in Gaza’s electricity supply.

In exchange, Hamas will end the nightly confrontations along the border, halt so-called incendiary balloons being flown into Israel, and guarantee that today’s mass demonstration was nonviolent.

This year’s anniversary was also marked throughout the occupied West Bank and by Palestinian citizens of Israel, as well as in capitals around the world. One example was London, where crowds of Palestinians and pro-Palestine supporters gathered outside the Israeli embassy to mark the occasion.

This all demonstrates that Israel, which has the fourth most powerful army in the world, was not able to break the will of the Palestinian people, who continue to resist using all means available.

Palestinian armed groups would not have been founded had their homeland not been occupied by Israel. Division between the two major Palestinian factions, Fatah and Hamas, would not have materialised had Palestinians lived in peace in their country. The bottom line is that Israel’s occupation is the root of the conflict. Let’s also stress that peace talks for the past 25 years between the Palestine Liberation Organisation (PLO) or PA and Israel did not achieve Palestinian statehood or freedom.

Gaza has become a source of inspiration for many around the world, while steadfastness has once again become a term describing the Palestinian people, who have been struggling for self-determination and the right to live as a free nation, rather than under Israeli occupation or control, for decades.