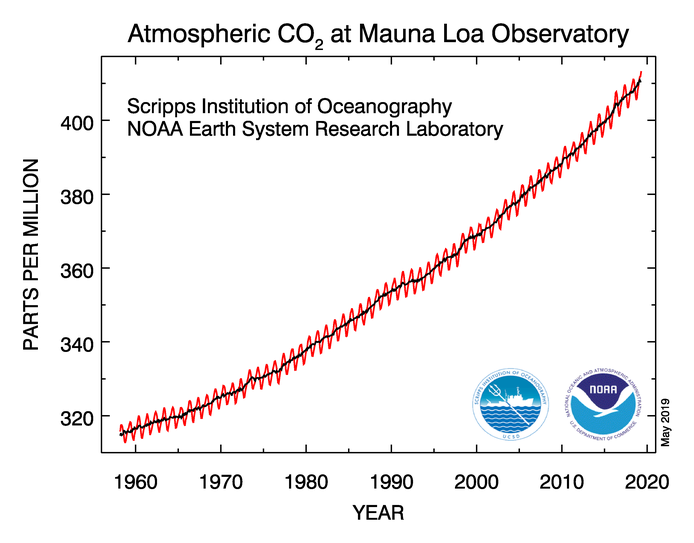 Ann Arbor (Informed Comment) – The National Oceanic & Atmospheric Administration measures atmospheric carbon dioxide at its Moana Loa observatory. You can see that on May 11 we were just about at 415 parts per million of CO2. A couple of days this week, we’ve gone over 415. When I say that, you should run screaming like a tsunami is coming over the horizon with mayhem on its mind. 415 is bigger than a million tsunamis. We put carbon dioxide into the atmosphere when we drive gasoline autos or burn coal or natural gas for heating.

(The chart above shows that we have, scarily, added about 100 ppm only since 1960. This process is speeding up, folks.)

In contrast, there are only about 19 active volcanoes putting out significant emissions in the whole world as we speak. They’d need to increase by a factor of 50 just to match American output, and China puts more CO2 out there than we do.

The last time the earth saw 415 parts per million of CO2 was the Pliocene era between 3 and 5 million years ago.

We cannot see the full effects of 415 yet. The oceans are very deep and very cold, and it will take thousands of years for them fully to absorb the extra heat being trapped on earth by carbon dioxide and methane.

But that’s the big bang and will take a while. We are already seeing significant climate emergencies, and the effects of the CO2 have been visible since at least the beginning of the 20th century. The American southwest has seen a century of unusual dryness, and the monsoons in India have been wetter and more destructive, over the past century. These trends will increase dramatically in coming years.

In the Pliocene, it was much hotter.

In the Pliocene, oceans were much higher, maybe 90 feet higher.

That is our fate, folks. That is what 415ppm produces. It is only a matter of time, and some of the sea level rise will come quickly.

Amsterdam, New Orleans, Lisbon, Miami– the list of cities that will be submerged is enormous.

The extra heat trapped here on earth by CO2 is melting all the earth’s surface ice, so that the water runs into the oceans and raises their level.

It will be a lot hotter. Some 3-6 degrees F. hotter. That’s an average for the whole surface of the world. Any particular place could be 15 degrees hotter. Try that out in Tucson, AZ. Some places will become uninhabitable. It can’t be stopped now.

What can be stopped is its getting any worse. But that would require moving with blinding speed to wind and solar power and electric cars.