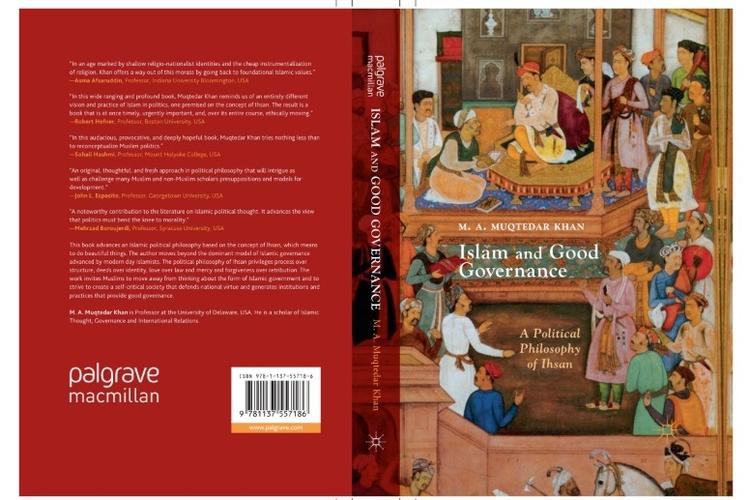 I am pleased to announce the publication of my book Islam and Good Governance: A Political Philosophy of Ihsan by Palgrave Macmillan publishing group

My goal was nothing short of advancing an alternate to the paradigm of Islamic politics that Islamists have to offer today.

It took more than four years to research and write Islam and Good Governance. It was a very difficult book to write because it entailed looking critically at my own faith and beliefs. I reexamined many of the popular assumptions that masquerade as dogma in Muslim discourses and tried to expose how the knowledge-power nexus has reduced Islamic values to ideology. The biggest challenge was to read and write critically about some of the giants I grew up admiring as icons of my faith tradition.

Nevertheless, the abuse of Islam and its teachings by radical groups like Daesh [ISIL] and Al Qaeda is a reality that no one can ignore. There are many Muslims who still want to see Islam play an important role in the public sphere and if alternate pathways are not highlighted for them, they will become vulnerable to recruitment by radicals. In Islam and Good Governance, I advance a vision of a virtuous state (The State of Ihsan) that can channel Muslim youth and political energy for good. Here are five reasons why I wrote this book.

Reason 1: I am hoping that Islam and Good Governance will answer the question; “If extremism, Al Qaeda and ISIS style, is not genuinely Islamic form of politics, then what is?” Islam and Good Governance, articulates an approach to governance that departs radically from the Islamist goal to impose Sharia (Islamic laws) using the coercive tools of the state on its citizens. I advocate an approach to governance based on Ihsan (to do beautiful things) that privileges love over law and freedom of religion and thought over imposed adherence of religious mores. Most importantly I privilege process (good governance) over structure (Islamic state).

Reason 2: I recognize that the highly ethical and compassionate vision of the state – the State of Ihsan – that I have envisioned may be too idealistic for Muslim nations mired in realpolitik internationally and identity politics domestically. But I am hopeful that it will start a conversation about imagining Islamic politics based on love, compassion, inclusion and forgiveness in academia, on social media, in policy circles and at kitchen tables.

Reason 3: We are witnessing a surge, a political awakening among Muslims in the West. Many of the political values that I derive from Ihsan – such as the “four freedoms” overlap with some of the goals of social justice campaigns in liberal societies. It is therefore my hope that young Muslims, living in democracies, can find an inspiration for political engagement that is authentically Islamic, yet dramatically different from those of Islamists for whom the ultimate goal is creating an ideological state that forces people to live under laws articulated centuries ago. The political philosophy of Ihsan that I submit is more realizable in open societies.

Reason 4: One important goal of this book is to demonstrate that over time Muslim political thinkers have imagined politics from very diverse perspectives. Relying on the archetypes of foundational Islamic thinkers like Al Farabi, Al Mawardi, Ibn Khaldun, Ibn Taymiyyah and Saadi of Shiraz; I show that Muslims have theorized politics from different perspectives that include philosophy, theology, sociological realism, jurisprudence and mysticism. The point is that the shariah based Islamic polity that contemporary Islamists advocate is just one form of Islamic politics. There are other ways of deploying Islam in the public sphere, which are also more compatible with democracy, pluralism and inclusion. The Ibn Taymiyyah model that Salafi-Jihadi groups advocate is just one Islamic model; there are others and it is important for Muslims who desire a public role for Islam to be aware of this diversity.

Reason 5: The final and the most important reason for writing this book is to explore how Ihsan can be deployed in the political sphere. Ihsan means to do beautiful things as if you are seeing God or at least be cognizant of the fact that he sees you all the time. Prophet Muhammad pbuh said the God has commanded Ihsan in all things, so why not in politics. Islam and Good Governance is my humble endeavor to show how Ihsan can be applied while engaging in politics. Regardless of its limitations, I believe it is a unique contribution to Islamic political thought and I hope it inspires many Muslims and non-Muslims to engage in virtuous politics.

Dr. Muqtedar Khan is professor Islam, Governance and Global Affairs at the University of Delaware. He is also a senior fellow of the Center for Global Policy. His articles can be found at www.ijtihad.org and his latest book is Islam and Good Governance: A Political Philosophy of Ihsan (Palgrave 2019).

You can buy this book here.