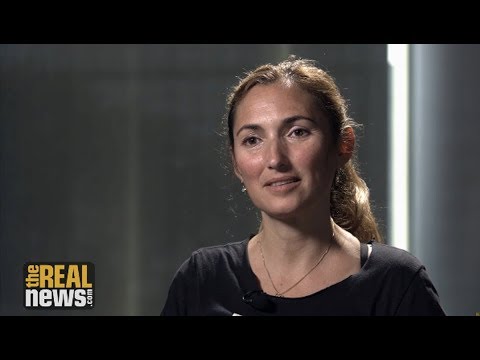 ( Waging Nonviolence ) – When diaspora Jews and those living in Israel join with Palestinians, they forge a more powerful and just movement to end the occupation.

I watched the Israeli Defense Forces throw several stun grenades — one right after the other — deep into a crowd of my friends earlier this month. I saw people dear to me get choked by soldiers, thrown forcefully onto the ground and dragged away by their limbs. Following this, the army arrested 17 people — including many Jewish activists from around the world, two Palestinian journalists and three Palestinian residents from the area.

The crime? Presumably, the IDF’s harsh punishment would be because our protest turned violent. However, we were steadfastly nonviolent. We were simply fixing a dirt road that would enable Palestinians in the area to access food, water and basic supplies.

The IDF’s behavior in this situation is sadly not shocking nor inconceivable, but to see it up close with my own eyes was deeply unsettling and upsetting.

The rehabilitation of this road was planned by a broad coalition of groups. Palestinians from the South Hebron Hills assembled a wide array of Palestinian partners. Meanwhile, the anti-occupation collective All That’s Left organized diaspora Jews based in Israel-Palestine, and the Center for Jewish Nonviolence brought 40 North American Jews to the action as part of a nine-day delegation to Israel-Palestine to learn about the occupation.

I know the sting of xenophobia, anti-Semitism and otherness, so I must work to ensure that no one else ever feels it.

In my own activist community in Israel-Palestine — which is the collective All That’s Left — we bring Jews together who are unequivocally committed to ending the occupation and building the diaspora angle of resistance. We leverage our position and privilege as diaspora Jews living in Israel-Palestine to bring more people into our cause, take part in educational activities, and engage in nonviolent activism in collaboration with our Palestinian and Jewish-Israeli partners. We grant diaspora Jews accessibility to what’s happening in Israel-Palestine and to other anti-occupation activism, which can be daunting given that neither Arabic, Hebrew, nor cultural competency come naturally.

We were founded in 2012 in Israel-Palestine by diaspora Jewish activists to create a coalition that includes people with different stances on Zionism and what the solutions to the conflict should be. We are all equal members of a community that seeks to work alongside those fighting the occupation on the ground. We do this work with an intentional effort to minimize hierarchy among ourselves. We also work with and learn from our Palestinian partners, whose leadership in the struggle is essential.

All That’s Left, delegations from the Center for Jewish Nonviolence, and other groups made up of international activists demonstrate the growing coalition of Jews who originate outside of Israel and are hungry to fight for what they know is right. They come with different knowledge and perspectives, and they want — and need — to connect to each other.

Like many of my American-Jewish peers, I grew up being told that Israel was a home for me. In my case, it actually became one. The sabbatical year my family spent in Israel was life-defining. I have joyful memories from my childhood of living in Jerusalem every summer, and Israel’s centrality was reinforced over and over again during summer camp and my day school education. These childhood lessons contributed to my decision to move to and live in Jerusalem at this point in my life.

Similarly, my rearing was heightened with lessons of social justice — of standing up and fighting for what was right and rejecting what was wrong. I knew the sting of xenophobia, anti-Semitism and otherness, and so I must work to ensure that no one else ever feels it.

But this connection to Israel and my understanding of justice are hard to reconcile. During our action to repair the road on May 3, cognitive dissonance abounded, but I did what I could to remain focused on the plain and present reality of the moment — no matter how disturbing it might be.

Along with our Palestinian partners in the villages of Susiya, Umm Al-Khair, A-Tuwani and elsewhere, we watched in anger as the IDF demolished homes in Area C — a part of the West Bank that’s under Israeli military control — and violently responded to our simple attempts at filling in potholes.

Nevertheless, we will continue to bear witness to these hateful acts. We will livestream, post pictures, tweet, hashtag and enact every nonviolent action we can think of — however big or small — so that those who can’t be there alongside us can also see the cruelty.

We refuse to stand idly by as the Palestinians we live alongside face ongoing violence, and we will use our bodies and the privileges they carry to do all we can to defend them. These are the same people who welcome us into their villages and homes. They make us tea, feed us pita and laugh with us while we work with them to rehabilitate their homes.

When Jews living in the diaspora and those living in Israel come together, we make a formidable force. When groups like All That’s Left, the Center for Jewish Nonviolence, and other groups from abroad work in collaboration with each other, both our Judaism and our activism are strengthened. And when we work under the guidance of our Palestinian partners — with whom we have been able to cultivate longstanding relationships — we forge a more powerful and just movement.

There’s an importance in cultivating relationships with each other. After the army violently evacuated us, we went to a nearby village where our partners live in the South Hebron Hills. Activists from the Center for Jewish Nonviolence and All That’s Left were intermixing, sharing food and stories. People used to this common violence shared their coping tactics and their trauma with newcomers who were processing what had just happened. Though all were upset, shaken and angry, there was genuine camaraderie born from difficulty.

The army may have tried to halt our work, and our collaboration, but our partnership began long before and will assuredly continue long after.

Rafi Ellenson is an educator and translator based in Jerusalem. He is a member of All That’s Left: Anti-Occupation Collective.

The Real News Network: “Jewish American Explains Why She Supports Palestine and BDS”