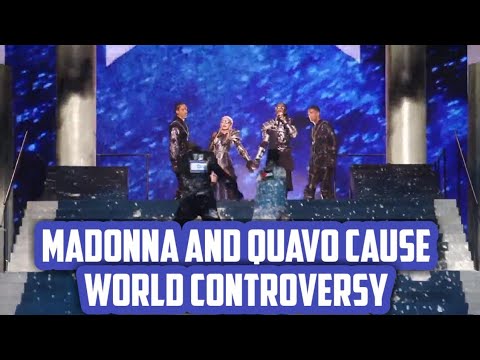 TEL AVIV (Ma’an) — Hatari, Iceland’s heavy metal Eurovision act, drew boos from the audience when the band held up banners featuring the Palestinian flag live on air during public voting at the song contest in Tel Aviv City, in southern Israel, on Saturday.

The band, who landed tenth place in the Eurovision song contest, have said they are against Israel hosting the contest and described it as “whitewash,” which has been the subject of boycott calls by pro-Palestinian groups.

While the public vote was being announced, members of Hatari held up the banners, reading Palestine, as cameras turned to them.

In addition, Einar Stef, one of the band’s members, posted a video on his personal Instagram profile, showing staff confiscating one of the banners and demanding the rest of them to be handed over.

Despite Hatari’s pro-Palestinian protest during the song contest, the Boycott, Divestment and Sanctions movement (BDS), which called for a “total boycott,” dismissed it and said in a statement, “Artists who insist on crossing the Palestinian boycott picket line, playing in Tel Aviv in defiance of our calls, cannot offset the harm they do to our human rights struggle by ‘balancing’ their complicit act with some project with Palestinians. Palestinian civil society overwhelmingly rejects this fig-leafing. The most meaningful expression of solidarity is to cancel performances in apartheid Israel.”

Although Madonna performing at the Eurovision stirred up controversy, she surprised many when two of her backup dancers, briefly appeared on stage wearing the Israeli and Palestinian flags on the back of their costumes and walked off stage arm-in-arm during her new song “Future.”

Prior to taking the stage, the 60-year-old said, “Let’s never underestimate the power of music to bring people together.”

Following the pop star’s performance, the European Broadcasting Union, which co-produced the contest alongside Israel’s national broadcaster, issued a statement saying, “This element of the performance was not cleared with the EBU and the Host Broadcaster, KAN,” adding “The Eurovision Song Contest is a non-political event and Madonna had been made aware of this.”

Ultimately, 25-year-old Dutch singer-songwriter, Duncan Laurence, beat 25 other Eurovision contestants, by winning 492 points with his song “Arcade.” His victory has given the Netherlands the right to host the 2020 finals after 44 years. Italy came second, with 465 points, and Russia third, with 369 points.

In April, some 171 Swedish artists and celebrities have signed an open letter urging to boycott the 2019 Eurovision Song Contest and stressed that “as long as Israel, with its apartheid policy, denies the Palestinians their basic human rights, we must renounce all participation in Israeli cultural exchanges.”

Meanwhile, dozens of LGBT groups signed a statement, in which they accused Israel of using the song contest as distracting “attention from its war crimes against Palestinians” and “forwarding its pinkwashing agenda, the cynical use of gay rights to distract from and normalize Israel’s occupation, settler colonialism and apartheid.”

In September 2018, over 140 artists from around the world, including six Israeli artists, signed a letter calling for the boycott of the 2019 Eurovision Song Contest and demanding the song contest should be boycotted if it is “hosted by Israel while it continues its grave, decades-old violations of Palestinian human rights.”

Performing in Israel still remains highly politicized, with many criticizing that Israel’s military action towards the Palestinians is more than enough to justify a cultural boycott.