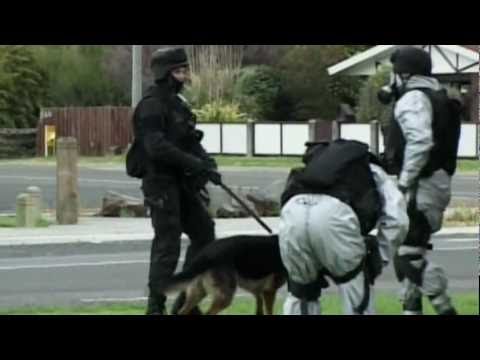 On Tuesday, the gunman in the Christchurch mosque shootings was charged with committing a terrorist act. The new charge came more than two months after the massacre.

The gunman, who the author and The Conversation have chosen not to name, had already faced 50 charges of murder and 40 charges of attempted murder stemming from the attacks. An additional murder charge was also brought on Tuesday, bringing the total to 51.

So, why was the terrorism charge added at this later stage? And why is it significant?

The terrorism charge is unprecedented because the offence of committing a terrorist act has never been prosecuted successfully in New Zealand. The offence is found in Section 6A of the Terrorism Suppression Act 2002 (NZ), which was enacted by the New Zealand parliament in response to the 9/11 terror attacks in the US.

The offence relies on a statutory definition of terrorism, which is found in Section 5. To constitute a terrorist act, the conduct must include the following:

On face value, it is clear the shootings at the two mosques in March, which left 51 people dead, amounted to terrorism.

The delay in bringing the terrorism charge was likely due to the fact New Zealand police and prosecutors needed sufficient time to ensure they could prepare a successful case. The definition of terrorism creates additional hurdles compared to a murder charge, and New Zealand authorities have faced difficulties using the Terrorism Suppression Act in the past.

In 2007, for instance, New Zealand police arrested a group of environmental activists running military-style training camps in the Urewera forest on the eastern side of the North Island. The raids were known as “Operation Eight.”

No terrorism charges were brought in that case, even though there was evidence that some members of the group intended to harm innocent people. The possibility of a terrorism charge was explored, but New Zealand’s solicitor-general concluded that the law was “unnecessarily complex, incoherent, and … almost impossible to apply.” Four of the 17 activists were eventually convicted of firearms offences.

More recently, two other cases – one involving letters laced with poison and another involving the publication of jihadist material – also could have been plausibly prosecuted as terrorism. However, likely due to the solicitor-general’s previous advice, the offenders were charged instead with criminal blackmail and disseminating objectionable material (a charge commonly used for child pornography).

It is not clear why the solicitor-general considered the terrorism law so difficult to apply after Operation Eight, as most of the evidence is not publicly available. The definition of terrorism is very similar to that found in Australia, as both laws are based on UK legislation. However, there is a greater focus in the New Zealand law on international terrorism conventions, which may make it harder to apply to domestic acts of terrorism.

More likely, it may have been difficult in that case to fit environmental activism within the definition of a political, religious or ideological motive because there is a presumption against legitimate protest falling within the law. In addition, there were significant concerns around police use of force and racial motives against the mostly Maori offenders.

Prosecutors will not likely face the same difficulties in applying the terrorism laws to the Christchurch massacre, where the intention to cause harm and the attacker’s motivations (as outlined in his manifesto) are obvious.

However, the prosecution may still be risky if it gives the gunman a platform to espouse his extremist views. He would still be able to do this while facing a murder charge alone, but a terrorism trial will carry added weight and the prosecutors will need to admit evidence about his ideological motives.

Why is a terrorism charge important?

There is no added practical benefit to charging the gunman with terrorism in addition to murder. A maximum penalty of life imprisonment was already possible with the murder charges.

However, the choice to bring a terrorism charge is not simply a practical one. The criminal law is said to have two purposes: a practical one (to put dangerous people in prison) and a moral one (to denounce conduct that is morally unacceptable).

Adding this charge signals to the wider community that the massacre was an act terrorism and will be punished as such. This may give victims, too, some degree of closure, if the offender is sent to prison for committing a terrorist act.

Labels are also particularly important in this case given that it was an act of terrorism by a white supremacist against Muslim worshippers. Had prosecutors only pursued the murder charges, they may have been criticised for a double standard. Acts of violence by Islamist extremists are commonly treated as terrorism, even if they result in far fewer fatalities.

In other words, bringing a terrorism charge is a trade-off: there’s a risk of giving the gunman a platform, but also a need to denounce the massacre for what it was – an act of terrorism.

This charge sends a clear signal that political or religious violence against innocent people is abhorrent and will be punished as terrorism, no matter its colour or ideology.