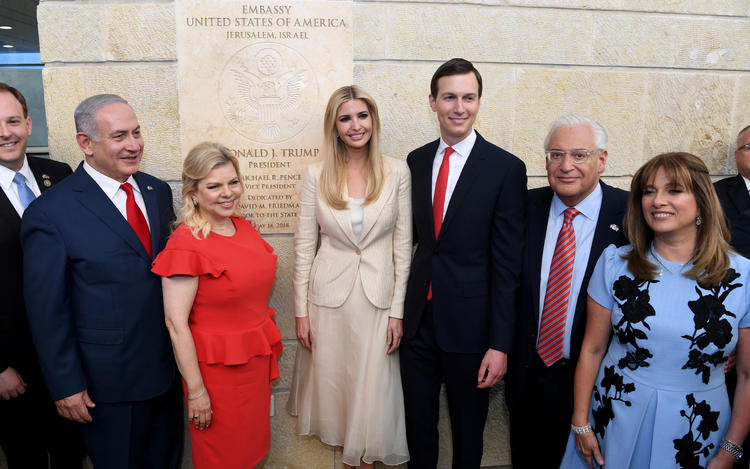 On 2 May Jared Kushner, US President Donald Trump’s son-in-law, was playing his cards very close to the chest at the Washington Institute for Near East Policy (WINEP), a pro-Israeli think tank. Kushner is the man charged with delivering the “deal of the century” that will supposedly secure peace between Israel and the Palestinians. He provided no hard details about what shape the deal would take. However, in a 45 minute interview, Kushner disingenuously deflected a question about a two-state solution: “[it] means one thing to Israelis and another to Palestinians, so we told ourselves – let’s try not to say it.”

On the same day, thousands of miles from Washington, the head of a little known US government commission was attending a Holocaust memorial ceremony at Auschwitz. Paul Packer, a New York hedge fund manager appointed by Donald Trump to run the United States Commission for the Preservation of American Heritage Abroad, told Breitbart News that the occasion, attended by several US ambassadors “shows the commitment that the Trump administration has to the words, ‘Never Again’, and to making sure that all our allies know the words of Secretary of State Mike Pompeo, that anti-Zionism equals antisemitism.”

Packer’s mention of Pompeo referenced a speech the secretary of state had given to the American Israel Public Affairs Committee (AIPAC) in March of this year. AIPAC has close links with WINEP. The secretary of state, commenting on the rise of anti-Semitism, said “this bigotry has taken an insidious new form in the guise of anti-Zionism [which] denies the very legitimacy of the Israeli state and the Israeli people.” In attacking academics, journalists and politicians who criticise Israel and condemning those who support the Boycott, Divestment and Sanctions movement (BDS) Pompeo continued: “Let me go on the record. Anti-Zionism is anti-Semitism.”

As the two-state solution slides, or rather is driven, into oblivion by the Trump administration and the Israeli government, I am reminded of a comment John Bolton, now the president’s National Security Advisor, made in 2017. He was in Israel at the time and he said there should be a three state solution: the Israelis to absorb most of the West Bank including the settlements and areas already designated as under its full control, the Jordanians to pick up the isolated Palestinian communities that were left in the West Bank and Egypt to take Gaza. The Palestinian dream of a homeland snuffed out irrevocably.

We still do not know what the Kushner deal entails but implicit in the treatment of the Palestinians by the Trump regime is the threat that if they don’t take whatever is on offer then the situation will only get worse. Bolton’s seemingly off the cuff remark may be the bleak future Trump will seek to punish them with should the Palestinians turn down his son-in-law’s deal.

At WINEP, Kushner talked obliquely about economic sweeteners: “What we will be able to put together is a solution that we believe is a good starting point for the political issues and then an outline for what can be done to help these people start living a better life.” The bulk of the sweeteners, reportedly in the form of massive cash transfusions from Saudi Arabia and the United Arab Emirates, is the carrot. However for the Palestinians it will be seen for what it is, a bribe to abandon their rights and their homeland.

The Americans, anticipating rejection, have already shown some of the stick by amongst other things eliminating almost all financial assistance to the Palestinians, pulling out of the UN Relief and Works Agency (UNRWA), shutting down the Palestine Liberation Office in Washington, and most menacingly recognising Israel’s sovereignty over the Golan Heights. Israeli Prime Minister Benjamin Netanyahu, fresh from another election victory is already mulling over claiming the West Bank settlements as sovereign Israeli territory. Should he do so, he would be gambling that the Trump administration would unequivocally back him against international opprobrium as it has already done with the annexation of the Golan Heights. It is a risk but a calculated one.

The message is clear. Trump has already punished the Palestinians and is saying he is fully prepared to punish them a whole lot more. There is nothing remotely statesmanlike in the American strategy. In keeping with the president’s approach to foreign affairs, Jared Kushner has eschewed the systems and structures that in normal times are used as essential tools of diplomacy. He shares his father-in-law’s egotistic view that he has no need for the machinery of government nor the thoughts of wiser and older Middle East experts. In his very limited world view, this is just another Manhattan real estate deal writ large.

In turning down “the deal of the century”, as they must, the Palestinians will be castigated as ungrateful and short-sighted. After all, Kushner will say, it is supported by your fellow Arabs, the Saudis and the Emiratis. And those who defend the Palestinians and attack the deal will be cast as anti-Zionists and therefore anti-Semites. It is, to give it its due, a clever ploy. Too clever perhaps by half.

Last year at a conference in Vienna on anti-Semitism, 35 distinguished Israeli academics, thinkers and artists published a letter in which they argued that “this fight against anti-Semitism should not be instrumentalized to suppress legitimate criticism of Israel’s occupation and severe violations of Palestinian human rights.” But that is precisely what the Trump administration and Benjamin Netanyahu are doing.

The authors of the letter noted: “Many victims of the Holocaust opposed Zionism. On the other hand, many anti-Semites supported Zionism. It is nonsensical and inappropriate to identify anti-Zionism with anti-Semitism.” The letter went unheeded.

In his interview at WINEP, Jared Kushner claimed that his deal will achieve a positive outcome: “If you’re able to help the Palestinian people have dignity and opportunity, that’s within the whole region’s interest and in America’s interest. Stabilization is a very important thing.”

Boxing the Palestinians into a corner from which there is no escape creates neither dignity or opportunity. Attempting to silence their supporters and thoughtful critics of Israel with claims of anti-Semitism will not lead to stabilisation. In all likelihood, it will create quite the opposite. Jared Kushner and his father-in-law will come to learn the limits of their arrogant bullying. But as ever the full cost will be borne by the Palestinians.