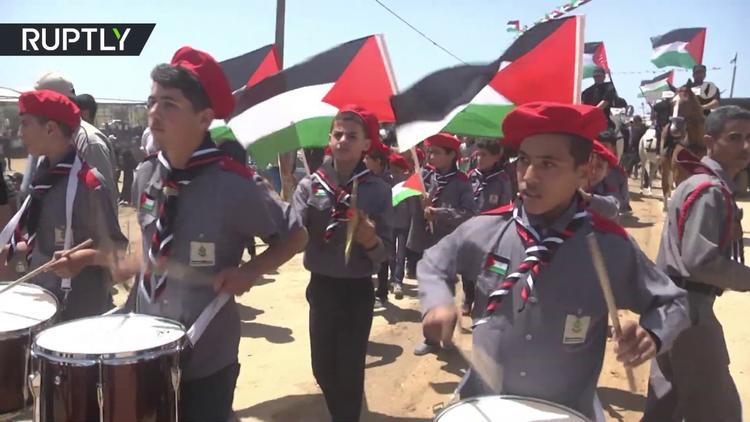 During the 1967 Six Day War, the West Bank and East Jerusalem were occupied by Israel. Fifty-two years later this brutal military occupation remains in place, with the West Bank’s almost three million Palestinian residents subjected to a maze of military checkpoints, attacks by illegal Israeli settlers and a lack of access to resources.

So what is life like for Palestinians in the occupied West Bank and East Jerusalem? Here are 12 things you should know.

Palestinians live in the shadow of the Separation Wall

Israel decided to build the Separation Wall in 2002, during the Second Intifada. Israeli NGO B’Tselem notes that, to date, “The route of the barrier — including the sections already built, those under construction and those awaiting construction – is 712 kilometres long.” Eighty-five per cent of the Wall cuts deep into the West Bank, ignoring the Green (1949 Armistice) Line and encircling Israel’s illegal settlement blocs to keep them “inside” Israel.

The Separation Wall divides Palestinians from one another. Several neighbourhoods which belong to the Jerusalem Municipality have been severed from the rest of the city by the Wall; Shu’afat refugee camp, east of Sheikh Jarrah, and Kafr ‘Aqab, near Qalandia checkpoint, are two prominent examples.

Another example is Qalqiliya, west of Nablus, which is almost completely surrounded by the Separation Wall. Furthermore, two out of three of Qalqiliya’s checkpoints are closed to Palestinians. Meanwhile, in Bethlehem – where street artist Banksy famously opened the Walled Off Hotel – a house belonging to the Anastas family is entirely surrounded by the colossal concrete structure.

Families are separated by physical and legal barriers

As a result of the Separation Wall, members of many Palestinian families are physically separated from one another. Yet according to a February 2019 report by human rights organisation Al-Haq, a number of legal barriers to family reunification also exist.

Al-Haq cites Israel’s 2003 “Nationality and Entry into Israel Law” — which “clearly targets Palestinians living in East Jerusalem” and plays on their status as “permanent residents”, but not citizens, of Israel – as just one example. The NGO explains:

“As ‘permanent residents’, Palestinians from East Jerusalem have to continually prove that their ‘centre of life’ is in the city, or they could have their ID revoked by Israel […] Palestinians from East Jerusalem who choose to marry a spouse with a West Bank or Gaza ID are likely only able to live with them and maintain their ID by living in Jerusalem neighbourhoods on the eastern side of the [Separation] Wall, i.e. separated from the city centre.”

Since 1967, over 14,000 Palestinians have had their residency revoked by Israel on these grounds.

Israel maintains a system of checkpoints that can be closed at any time, preventing Palestinians from travelling to school, hospital or work, or to access their land.

In a July 2018 survey, the UN’s Office for the Coordination of Humanitarian Affairs (OCHAoPt) recorded that there are “705 permanent obstacles across the West Bank restricting or controlling Palestinian vehicular, and in some cases pedestrian, movement.”

Israel also runs a system of “flying checkpoints” which can disrupt travel at a moment’s notice. OCHAoPt notes that, “Between January 2017 and the end of July 2018, Israeli forces employed an additional 4,924 ad-hoc ‘flying’ checkpoints, or nearly 60 a week.”

The only way for Palestinians living in the occupied West Bank to travel abroad is via the Allenby Bridge, the land crossing into neighbouring Jordan.

Palestinians leaving via Allenby must pay an exit tax, which is around $43 or 153 shekels per person. Given that the average monthly salary in the West Bank is around 1,000 shekels ($280), this fee can cost an individual or family several days’ wages.

This doesn’t take into account the long journey which must be undertaken by Palestinians to reach Jericho, where the bridge is located, and the onward journey to the Jordanian capital Amman to reach the airport. Palestinians are also subjected to long queues, intense questioning and mistreatment by border security officials, both when leaving and re-entering the West Bank.

West Bank Palestinians also face a difficult task when trying to visit Jerusalem’s holy sites, including Al-Aqsa Mosque and the Church of the Holy Sepulchre.

One reason is Israel’s punitive restrictions on who can visit the holy city. During this year’s Muslim holy month of Ramadan, “Men who are under 16 and over 40 years old are allowed to visit Al-Aqsa Mosque”, but “men aged between 30 and 40 need permits to do so, and those 16-29 are ineligible to apply.”

Al-Monitor explains that, “Ten years ago, Israel started to allow Palestinians in the West Bank to enter Jerusalem to pray at Al-Aqsa during the month of Ramadan [but] there are no official criteria for the permits, only conditions for consideration.” As a result, many are rejected without any clear explanation.

Palestinians are often unable to access their land and crops

Many Palestinians have land lying between the Separation Wall and the Green Line, meaning that they must apply for a permit to access and work on their own property.

During the autumn olive harvest, Israel is meant to open the crossing points for West Bank farmers to access their trees. However, of the 77 operable gates, only 13 are opened daily, with 47 requiring access permits and 30 accessible only after prior coordination. OCHAoPt adds that, “Access restrictions to land behind the [Separation Wall] impede essential year-round agricultural activities such as ploughing, pruning, fertilising, and pest and weed management,” leading to a neglect of the land and lower product yields.

Access to fresh water is limited by Israel, impacting upon health and farming

During the 1967 war, Israel seized control of all water resources in the newly-occupied Palestinian territories (oPt). To this day, it retains exclusive control over these water resources. B’Tselem has pointed out that the 1993 Oslo Accords stipulated that “80% of water in the West Bank pumped from the mountain aquifer – a joint Israeli-Palestinian resource – would be allotted to Israeli use and the remaining 20% for Palestinian use.”

As a result, as well as additional Israeli restrictions and technical difficulties, “Palestinians in the West Bank live with a constant shortage of water that is largely manmade, [with the] average water consumption for domestic, commercial and industrial uses [standing at] 84.3 litres per person per day.” B’Tselem notes that, “This falls short of the minimum recommended by the World Health Organisation, which is 100 litres of water per person per day, for personal and domestic use only,” without accounting for commercial and industrial use.

This has also had an impact on the West Bank’s agriculture, with the once fertile Jordan Valley and Jericho area now struggling to obtain the water needed to sustain Palestinian agriculture.

OPINION: Access to clean water is a human right, so why is Palestine an exception?

Palestinians’ right to healthcare is curtailed

West Bank Palestinians’ right to healthcare is regularly denied by Israel. This means that Israel is in violation of the International Covenant on Economic, Social and Cultural Rights, and the Fourth Geneva Convention, under which it is bound as “the occupying power [which] has the duty of ensuring and maintaining […], the medical and hospital establishments and services, public health and hygiene in the occupied territory.”

Restrictions on movement further compound this problem. As a result of Israel’s Separation Wall, in 2011 only five per cent of Palestinian Red Crescent ambulances were allowed to enter Jerusalem from the West Bank to attend the six Palestinian hospitals in the city. Even within the West Bank, Palestinians often succumb to their wounds before they reach the nearest hospital as a result of being held up at Israeli checkpoints.

For as long as Israel has occupied the West Bank, it has built illegal settlements. According to B’Tselem, at the end of 2017 there were 131 Israeli government-sanctioned settlements and 110 outposts — which are not sanctioned by the government – across the West Bank. There are a further 11 settlements in Jerusalem, as well as settlement enclaves in the H2 area of Hebron, which includes the Old City.

The impact of these settlements on Palestinians is profound, with many built on confiscated Palestinian land. According to a 2017 Haaretz report, there are over 3,000 residential and public buildings built on private Palestinian land in the occupied West Bank, which have been “legalised” retrospectively by Israel’s “Regularisation Law”.

In addition, the sprawling infrastructure that comes with the settlements – which includes bypass roads for Jewish-Israeli use only, “security buffer zones” and designated industrial areas — dissects the West Bank, turning the territory into cantons and making travel between Palestinian population centres virtually impossible. A 2017 report by the United Nations Economic and Social Commission for Western Asia (UNESCWA) found that this system installed across the West Bank fitted the legal definition of apartheid, being designed to separate populations on the basis of race and ensure the dominance of one group.

With the illegal settlements come illegal Jewish settlers. There are over 600,000 settlers across the West Bank and East Jerusalem, in contravention of the Geneva Convention, which prohibits the transfer of civilian populations into occupied territory.

Violence against Palestinians by settlers is commonplace. Yesh Din notes that, “Most violent offences take place on Palestinian farmland or on the outskirts of Palestinian villages, and are part of a calculated strategy for dispossessing Palestinians of their land.”

Nowhere is this violence more visible than Hebron’s H2 district, where around 800 illegal settlers have occupied Palestinians’ ancestral homes and turned the Old City into a no-go area for the indigenous population. Al-Shuhada Street, once a thriving market, now stands empty, covered with mesh and wire to protect the few Palestinians walking there from stones, glass and rubbish thrown at them from above by Israeli settlers.

For the West Bank’s Palestinian Bedouin, such daily violence is perpetuated by the Israeli state in the form of house demolitions and forcible transfer.

According to OCHAoPt, 46 Palestinian Bedouin communities are “considered to be at high-risk of forcible transfer due to a ‘relocation’ plan advanced by the Israeli authorities.” The 8,000 Palestinians who live in these communities – over half of whom are children – face regular demolitions, with 248 homes demolished in 2016 alone.

Perhaps the most well-known example is Khan Al-Ahmar, a Bedouin village situated east of Jerusalem in the occupied West Bank. Slated for demolition since 2011, Israel is keen to see the village’s 173 Jahallin Bedouins transferred forcibly to another location in order to complete its plan for a contiguous belt of illegal settlements from Jerusalem to Jericho. Although the Israeli government has thus far refrained from demolishing the village as a result of international pressure, hard-line politicians continue to push for its destruction.

According to statistics from the United Nations Relief and Works Agency for Palestine Refugees (UNRWA), around 800,000 West Bank Palestinians are officially registered as refugees. Around 25 per cent of these refugees live in specially-designated camps; Dheisheh Camp near Bethlehem, for example, Shu’afat Camp near Jerusalem and Balata Camp near Nablus.

Many of these refugees have been displaced repeatedly: from their ancestral homes in historic Palestine; from East Jerusalem during the 1967 War; and now internally displaced within the West Bank. A recent UNRWA report found that Israel continues to forcibly displace Palestinians; in 2013, “a total of 1,103 Palestinians were displaced over the course of the year [in the West Bank and East Jerusalem], with refugees accounting for 34 per cent of those displaced.”

Seventy-one years after the Nakba, West Bank Palestinians continue to suffer the consequences of Israel’s policies, while its 52-year-old military occupation pervades all aspects of life and shrinks the possibility of normality ever becoming a reality.