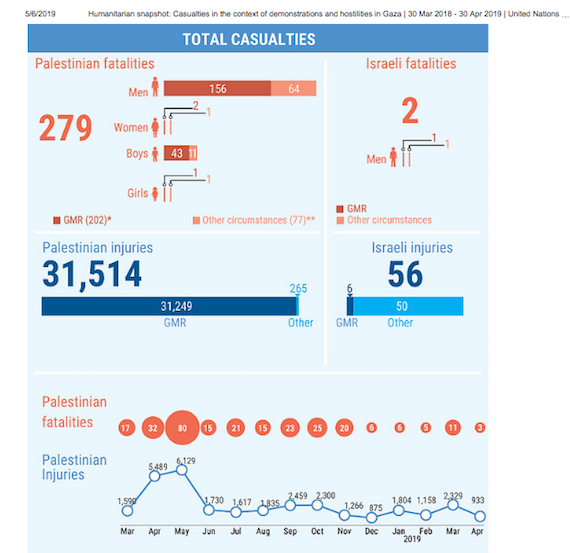 The reporting on the fighting between Palestinians in the Gaza Strip and Israelis the past few days, as usual, has mostly lacked context and proportionality.

Number of Gaza Palestinians killed by Israeli snipers in past year: 304

Number of Gaza Palestinians injured by Israeli snipers in past year: 31,691

Number of Israelis killed by Gaza Palestinians in past year: 6

Number of Israelis injured by Gaza Palestinians in past year: 250

The below ReliefWeb chart reflects the numbers before this weekend’s further violence, reported here.

Israelis in southern cities such as Sderot and Beersheva have been targeted by unguided little rockets from Gaza, which is a war crime since it is illegal to endanger civilians in that way. However, that most of the Palestinian families in Gaza, some 70 percent, were chased out of those cities in 1948 and after by the Israelis who have now settled them is not irrelevant even if it cannot excuse a war crime.

The Israeli emphasis on the number of rockets fired is propaganda, which most US newspapers fall for by putting it in headlines. These 700 rockets are not missiles but for the most part high school science experiments and almost all of them fall uselessly in the desert. All those rockets killed 4 persons. Those deaths are deeply to be regretted, but it should be obvious that the hundreds of rockets number does not tell us anything significant about the conflict.

The rockets are so ineffectual that Israel opened schools in the south on Tuesday, which the government wouldn’t have done if it was terrorized by 700 rockets

Moreover, the emphasis on 700 rockets rather takes the focus off the actually effective bombing, which is done by Israeli fighter jets that committed war crimes by striking 310 residential buildings. You can’t just drop bombs from 20,000 feet on cities where people live, and especially on apartment buildings! That is a war crime.

The Israelis conducted 300 airstrikes just in the past 3 days, with huge, effective bombs, which explains the 154 Palestinians wounded.

Moreover, Palestinian casualties have been disregarded, not only in these two or three days but for the past year, during which Israeli snipers have injured thousands of unarmed, peaceful Palestinian protesters and killed a couple hundred more. These killings and woundings are also war crimes, this time on the part of the Israeli army. You can’t just shoot people down by arbitrarily declaring that they are in a kill zone where they may be shot at will. They have to pose a clear and present danger to the troops. 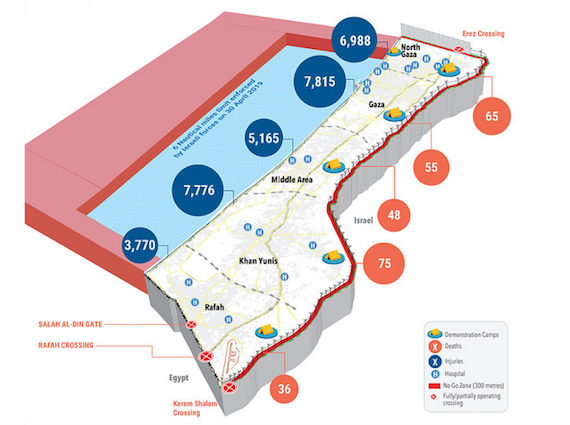 The Egypt-mediated ceasefire comes after Israeli warplanes carried out at least 320 airstrikes across the Gaza Strip, while about 600 rockets were fired from Gaza towards southern Israel.

The Palestinian Ministry of Health in Gaza, confirmed that 25 Palestinians, including an infant, toddler, and two pregnant women, were killed in the Israeli airstrikes. In addition, a husband and wife were found to have succumbed to their wounds under the rubble, as a result of the airstrikes.The ministry also confirmed that at least 154 Palestinians were injured.

The Israeli escalation came after Israeli forces shot and killed four Palestinians in the 57th “The Great March of Return” Friday protests, during which thousands of Palestinians take to the borders to peacefully protest the 12-year Israeli siege.The destruction from three Israeli offensives over the past six years, including damage to the enclave’s water, sanitation, energy, and medical facilities, coupled with slow reconstruction due to the blockade led the UN to warn that Gaza could be “uninhabitable” by 2020.”