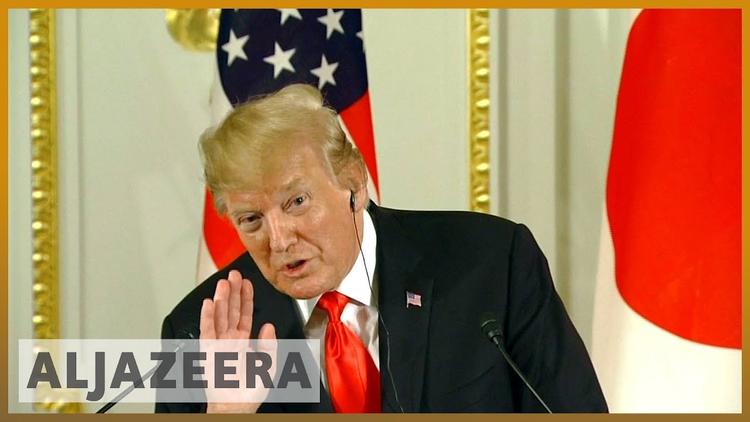 Ann Arbor (Informed Comment) – Trump said in Japan that he is not looking for regime change in Iran.

Trump said at a news conference with Japanese Prime Minister ABE Shinzo, “We aren’t looking for regime change – I just want to make that clear. We are looking for no nuclear weapons. I really believe that Iran would like to make a deal, and I think that’s very smart of them, and I think that’s a possibility to happen. It has a chance to be a great country with the same leadership.”

Trump breached the treaty the US and other members of the UN Security Council signed with Iran in 2015, which aimed precisely at forestalling Iran from having nuclear weapons.

Editors and journalists and US politicians seem perpetually confused about the difference between a civilian nuclear enrichment program and a weapons program.

Iran has not had a weapons program since 2002, and that program was rudimentary. The cult-like People’s Jihadis (Mojahedin-e Khalq or MEK) outed the program in that year, and the Iranian government mothballed it. The People’s Jihadis are a small fanatical Iranian dissident group once hosted by Iraqi dictator Saddam Hussein, which has carried out large terrorist attacks.

So what Iran does have is a civilian enrichment program for producing fuel for its three nuclear reactors at Bushehr, built by Russia. These are light water reactors.

Uranium in nature comes mixed as U235 and U238. It is U235 that is volatile and useful as a fuel. But to run a reactor, the proportion of U235 in the uranium has be to increased to 3.5 percent. This is accomplished by putting the uranium in a centrifuge, gassifying it, and whirling it around so as to separate out the U235 from the U238.

This civilian nuclear enrichment for fuel is what Iran has been doing for the past 16 years. It is very different from making a bomb, which requires a whole set of other technologies.

Iran did enrich some uranium to 19.5 percent as fuel for a small medical reactor, to produce isotopes for treating cancer. That level is still considered LEU or Low enriched Uranium.

The problem with centrifuges is that they are potentially dual use. If you had enough centrifuges and could secretly keep feeding the ever more enriched uranium through them, you could eventually enrich to 95% to make a bomb.

You could also theoretically make a bomb with a heavy water reactor, and Iran had one planned at Arak.

So the 2015 Joint Comprehensive Plan of Action closed off Iran’s avenue to a bomb in four ways:

1. It is restricted to 6,000 centrifuges, so few that it would take a very long time to enrich uranium with them to bomb grade.

2. It is subject to regular UN International Atomic Energy Agency inspections. These inspections involve sophisticated technology that can detect the signature of plutonium or HEU (High Enriched Uranium). The equipment cannot be fooled, since the signatures are powerful and stay around.

3. Iran was forced to brick in its planned heavy water reactor at Arak. It isn’t being built, though Iran is threatening to revive the project if it goes on being subjected to severe sanctions.

4. It had to cast its 19.5% enriched uranium stockpiles in a form that makes it impossible to further enrich them.

The CIA has never found any evidence since 2003 of Iran even wanting a nuclear weapons program, much less practically embarking on one. And the four restrictions of the JCPOA make it impossible to establish such a program as long as they are in place.

So if what Trump wanted was “no nukes,” then he already had that in the form of the JCPOA, which he has tried to destroy!

Destroying the JCPOA will simply remove the restrictions on Iran’s enrichment program, the opposite of what you would do if you don’t want them to have weapons.

Iran did not mothball 80% of its enrichment capacity out of the goodness of their hearts. They did it because they were promised an end to international sanctions. Instead, Trump has ratcheted up the sanctions far beyond where they were in 2014.

Iran was screwed over by the US– it gave up its only deterrence card to forestall a US invasion and regime change. And then once that was done, the US slapped back on the sanctions at an even more powerful level.

There is almost no incentive for Iran now to remain in the deal. For Trump to go around the world forbidding other countries (including Japan) to buy Iranian oil is, contrary to what he says, an attempt to overthrow the government, which has been heavily dependent for its revenues on oil exports.

I suspect Abe Shinzo [Japanese put their last names first] told Trump all this, and he is probably carrying a message from Trump to Tehran next month. In the meantime, the Iranian economy is deeply hurting and Iran has little reason to make yet another deal with someone who lightly reneged on 3 years of work on the last one.