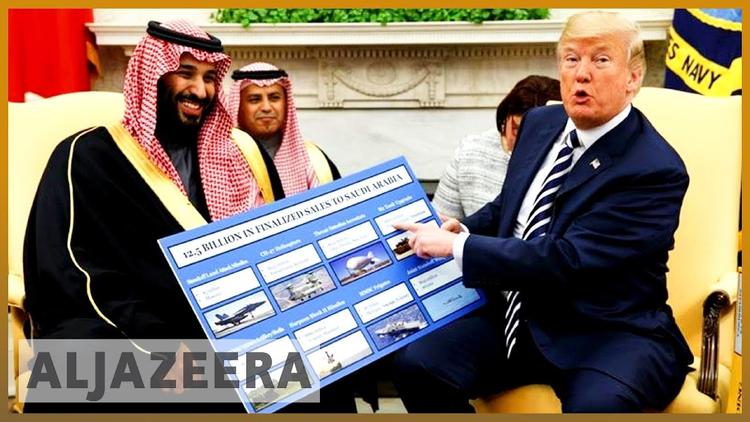 The US Senate yesterday blocked arms sales to Saudi Arabia, ushering in a new episode in the House’s stance towards the Kingdom. This comes as a rebuke of US President Donald Trump, who has been trying to sell $8 billion worth of military weapons to Saudi Arabia, the United Arab Emirates (UAE) and others.

Though the US administration reportedly cited Iran as justification for invoking emergency powers to transfer the arms, this does not appear to have been a good enough reason to make the sales, particularly at a time when there is clear division on whether war with Iran is the right course of action. The senators voted 53-45 in two votes and 51-45 in a third; in doing so, they succeeded in passing 22 resolutions of disapproval.

President Trump has been keen to maintain good relations with Saudi Arabia and its Crown Prince Mohammed Bin Salman (MBS) since he became president. This has remained his policy, even in spite of the crimes Saudi Arabia is committing in Yemen and the murder of Saudi journalist Jamal Khashoggi at the Saudi Consulate in Istanbul in October. Since less than two-thirds of the Senate voted to block the arms sales, the president may now intervene in order to prevent the Senate’s decision from entering into force.

“It is likely that President Trump will veto the latest block of arms sales to Saudi Arabia and the UAE,” Kristian Ulrichsen, a Baker Institute fellow for the Middle East, explained. “The direct impact will more symbolic than anything else, particularly as it comes in the direct aftermath both of the UK court ruling on Saudi arms sales and the UN report into the death of Jamal Khashoggi, which are likely to continue to increase the pressure on the US [and British] governments to reassess at least certain aspects of their defence sales to the Kingdom.”

The fact that some Republican senators have joined Democrats in these votes shows that they want to create a unified position which conveys a message to President Trump, as they did when they passed the war powers resolution a few months ago. Although they seem to know that President Trump is not going to allow them to block the sales, the bipartisan anger in these votes appears aimed at embarrassing the president, who has been taking a “Mohammad Bin Salman First” instead of “America First” approach to policy.

In light of the fact that US weapons have been used to kill civilians in Yemen, senators seem to have realised that giving extra weapons to Saudi Arabia — regardless of the reason behind the decision — means these weapons are in the wrong hands.

“If the Senate wants to show the world that, even if you are an ally you cannot kill with impunity, this is the moment,” Senator Bob Menendez said on the Senate floor, citing Saudi Arabia’s role in Yemen. The president has given the impression that the thousands who have died in Yemen mean nothing to him; the Senate has, therefore, stepped in, believing it cannot guarantee what Saudi Arabia will do with these weapons.

This is because, for four years Yemen – which is now the site of the world’s greatest humanitarian crisis – has raised a generation that has known only destruction. The senators seem to have had enough of being complicit in such a conflict and decided that more arms sales to Saudi Arabia will be a colossal mistake. Frankly, the US could have stopped this devastating war if it had wanted. Its continuous support for the Kingdom has made the Saudi-led coalition act like a monster which takes nothing into consideration during its indiscriminate bombing campaigns, which target unarmed, innocent civilians. The US administration could have placed pressure on Saudi Arabia, but it did not care.

The US’ policy towards Saudi Arabia has caused severe disagreements between President Trump and members of the Republican Party. The outrage which followed Khashoggi’s murder was not enough to make President Trump change his position or rethink the future of relations with the Middle East’s richest country. If the president had any degree of respect for his country’s reputation, he should have halted arms sales to the Kingdom without Congress forcing him to do so.

It is time for the US president to realise that relations with Saudi Arabia will never return to how they were unless the person who ordered Khashoggi’s murder is punished and the war on Yemen is stopped. He should realise that he and his administration are the only friends the Saudi leadership has left in Washington. It seems that everyone else believes everything has a limit, which the Saudi regime has exceeded since MBS became the de facto ruler. This is why the Senate has remained steadfast and decided that, whatever the excuse for selling arms, if they are going to the Saudis then they should not be approved.

“This vote is a repudiation of Trump’s foreign policy embrace of the Saudi Crown Prince, Mohammad Bin Salman,” Nader Hashemi, Director of Center for Middle East Studies at the University of Denver, Colorado, explained. “It is the result of the tireless work from human rights activists, NGOs and citizen groups who are outraged that the USA is complicit in war crimes in Yemen and human rights abuses in Saudi Arabia.” “A major victory has been registered against the pro-Saudi lobby in Washington DC,” he added.

It may be right that there are economic relations, which President Trump seems to care so much about. However, this should never be at the expense of the US’ global image which has been downgraded due to his incomprehensible behaviour towards the Kingdom. The billions of dollars the Saudis have in their pockets seem to have influenced the US’ foreign policy, which is not how things should be.

Arguably, if someone else was in the White House the situation may have been different, but, since Trump remains president, we are left with no option but to hope he is not re-elected next year. If he is, the US will once again be in the hands of someone who has no respect for morals, ethics or principles.