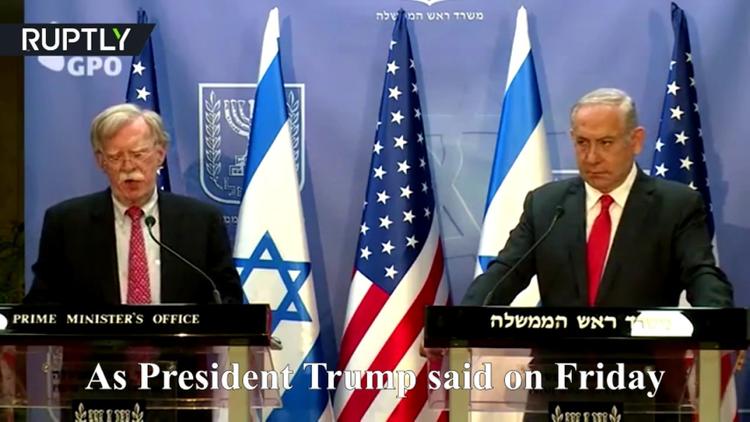 London (Informed Comment) – Donald Trump’s increasingly aggressive stance towards the Islamic Republic of Iran to supposedly curtail its nuclear capabilities is doomed to fail, as the regime is becoming more hard-line and will become more assertive in the region in response to Washington’s aggression. Trump’s stance clearly has no real benefit to the United States or the West, and risks throwing the region into greater turmoil.

Europe’s voice to revive the Joint Cooperation Plan of Action (JCPOA), penned in 2015 to provide Iran with sanctions relief in exchange for curtailments to their nuclear program, is marginalized amid increasing Saudi and Emirati pressure on the Trump administration, along with influential US neoconservatives like John Bolton.

Meanwhile, more sensible voices in Washington are ignored, including from a recent letter to the US President, signed by 76 former prominent US military figures, ambassadors and diplomats.

Though some may interpret Trump’s backing down from striking Iran as a positive step, after Tehran downed the US drone, that US strikes were originally ordered shows hawkish voices are succeeding to sway Trump. There is clearly an endgame to isolate and even attack Iran.

Trump himself claimed he wanted to “destroy Iran”, echoing the aggressive narratives that have the ruling power in Washignton. This also trashes some claims in Washington that the US does not seek conflict with Iran.

Though Trump will likely not strike Iran pre-emptively, Washington seeks to punish and isolate the Iranian regime, while pushing them into a desperate situation where they would be forced to react.

“If the leadership of Iran behaves badly, then it’s going to be a very, very bad day for them,” Trump himself said.

Yet far from scaling back Iran’s ambitions, Iran will further assert itself regionally giving the hardliners a boost.

Tehran is divided between two camps: the conservatives, largely made up of the elite revolutionary forces after the 1979 Iranian revolution, and reformists like President Hassan Rouhani. The former evidently has the most influence over the latter, and now Trump’s isolation of Iran will empower these further, and potentially radicalize some of the moderates.

As Trump shows he is disinterested in talks with Iran, his increasingly hostile stance confirms to Iran that Washington cannot be trusted. While the United States had adopted an antagonistic position towards Iran after 1979, the 2015 JCPOA built trust in the Iranian regime that they had a real Western negotiating partner for the first time. Trump has shown an unprecedented hostility towards Tehran.

Hardliners in both Washington and Iran will become more empowered as a result, meaning that future US administrations will struggle for peace. Trump winning a second term in 2020 could worsen this crisis.

Trump’s decision to impose further sanctions on Iran after the drone shooting last week signifies that he is keen to escalate tensions with Iran. Meanwhile, the Washington Post reported on Saturday that, in another provocative and unnecessary move, the US had conducted a cyber-attack on Iranian missile control systems and a spy network. Tensions are clearly going to worsen unless drastic changes are made.

Asides from striking Iran, further US support to the opposition MEK (People’s Mujahideen of Iran) which Tehran has outlawed as a terror group will likely continue. Washington considers MEK as a pro-Western vehicle of regime change in Iran.

Yet despite having comparatively limited military and technological capabilities, Iran is still a strong regime. Tehran will easily be able to crush MEK and continuing to oppose it will in turn give the state more power, as counter-terrorism responses often do for governments.

Iran still has allies such as China and Russia, who shore up the regime to secure their own economic and geopolitical interests. Along with crushing America’s credibility as a peacemaker, and thus further diminishing its global diplomatic influence, Iran could move further towards Beijing and Moscow’s arms.

Could Iran strike back at the US, to a harsher level? While much of its rhetoric, such as armed forces general staff spokesman Brigadier General Abolfazl Shekarchi saying “Firing one bullet towards Iran will set fire to the interests of America and its allies,” is likely just that.

Yet despite two years of pressure from Trump on Iran, Tehran’s regional influence – particularly in Iraq, Syria and Lebanon, has not declined. It will likely try to further boost its own regional influence, in response to Washington’s antagonism, and further create friction.

Another perceived benefit of this anti-Iran propaganda is that it justifies more weapons sales to Washington’s Gulf allies. While the US Senate successfully blocked an $8 billion arms transfer to Saudi Arabia, to allegedly counter Iran, Washington’s unconditional support for the Gulf monarchies opposition to Iran drives a regional wedge.

Though Saudi Arabia’s coalition says it targets Iranian influence in its war on Yemen, despite Tehran only giving limited assistance to the Houthi rebels, their war with an anti-Iran pretext, backed by Washington’s wider regional policies, actually drives the Houthis closer to Iran.

Meanwhile, if Iran lashes out, by firing missiles or blocking the Strait of Hormuz, GCC countries, particularly the United Arab Emirates would be the first to suffer, throwing the region into more instability.

Clearly Washington’s own aggressive attempts to curtail Iranian hardliners and belligerence is having a reverse effect.

Trump has clearly not learnt from past US military failures, particularly the disastrous invasion of Iraq which handed the country to Iran on a plate, after Washington backed the same anti-Saddam Hussein and anti-Ba’athist factions and politicians as Iran did.

In the absolute worst-case scenario, that Washington invaded Iran, this would be a war which America could not win. It would cost America billions of dollars in military expenditure, and Washignton would be ingulfed in a futile, costly operation that could last several years.

Europe should push for a stronger, more unified voice, in order to bring about a more multilateral change. This means that the JCPOA deal should be tried to be revived, particularly as Iran has been the only state sticking to the deal so far. Meanwhile, more sensible figures in Washington should continue pressuring for a more peaceful solution, to revive any fragile hopes of peace with Iran.