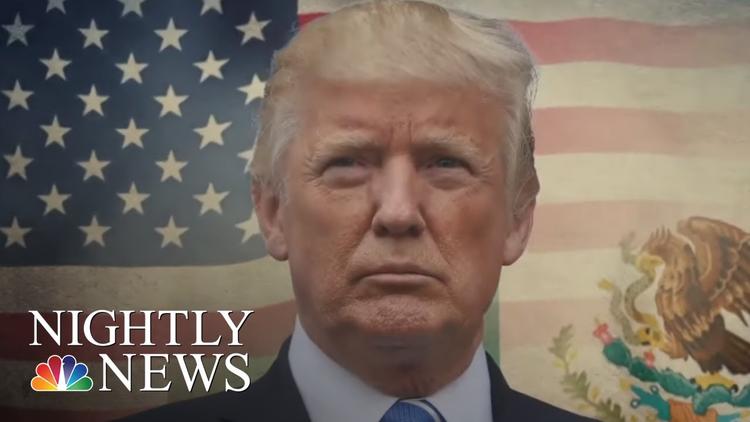 (FPIF) – There’s nothing “uncontrollable” about people applying for asylum. All the U.S. has to do is meet its obligations under international law.

Donald Trump has once again torpedoed the U.S. relationship with Mexico — its third-largest trade partner, closest neighbor and, actually, an ally — by announcing his decision to impose a 5 percent tariff on all Mexican goods if Mexico doesn’t stop Central American migrants and refugees from reaching the United States.

Trump, ever the alpha macho, has thrown down the gauntlet to Mexico. His rant written on White House stationary concludes with a direct threat to the Mexican president: “Mexico cannot allow hundreds of thousands of people to pour over its land and into our country — violating the sovereign territory of the United States. If Mexico does not take decisive measures, it will come at a significant price.”

The move once again exploits the plight of thousands of families to galvanize a racist electoral base. The tariff measure against Mexico, like the wall, will fire up his supporters — but he may have gone too far this time. Trump has gotten pushback from Republicans, business, and for the first time, from south of the border.

Mexico’s president Andres Manuel Lopez Obrador fired off a letter retorting that “social problems are not solved with taxes or coercive measures.” He reiterated his commitment to addressing the root causes of displacement and cited FDR’s defense of the rights of freedom from want and freedom from fear. He ended politely but pointedly: “Please remember that I do not lack courage, that I am not a cowardly nor timid, but rather I act on principles.”

After six months of enduring Trump’s bluster, the tariff threat seems to have finally cracked the appeasement strategy of the new Mexican government. After months of capitulation — including flowery letters of praise that bewildered Mexicans who, if they agree on anything, agree on being vehemently against Trump — AMLO’s sharp defense of Mexican sovereignty signals a shift in more than tone. The Mexican president said he does not want confrontation and much less to resort to retaliatory tariffs, but his letter makes it clear it’s No More Mr. Nice Guy either.

Given this bold stance, the question is: What are the likely scenarios for the tariff threat, and the binational relationship in general?

The sheer absurdity of Trump’s order renders it unworkable in political and even practical terms. According to the plan, the tariff, effective June 10 under the “International Emergency Economic Powers Act,” would increase by 5 percent a month to 25 percent, and stay there if Mexico fails in the impossible — and probably illegal — task of running interference against migrant and refugee families for the U.S.

Unless AMLO takes a sudden sharp turn into Orwellian territory where no one is allowed to move about or speak freely, Mexico cannot stop immigration. There is no period or place in human history without human migrations. Migration always exists — U.S. immigration laws only determine whether it’s documented or undocumented. The Republican administration has not even tried to adjust those laws to labor markets and other socioeconomic realities.

Other premises of the “emergency measure” are equally absurd. It should come as a relief to know that the number of migrants today is neither unprecedented nor unmanageable, that there is no basis for considering desperate families a security threat, and that this wave of migration is mostly not, in legal terms, illegal — it’s asylum seekers immediately reporting to authorities for processing.

There’s nothing “uncontrollable” about that — the U.S. government simply has to develop the mechanisms to attend to it in the terms established by national and international law that assure the right to safety for all human beings, and especially children, no matter where they happen to be born.

The countries people are fleeing — notably Honduras, Guatemala, and El Salvador — expel their own citizens in large part due to patterns of violence established by U.S. policies. These include supporting death squads and genocide, bolstering repressive dictatorships past and present, exporting the U.S. gang model, backing megaprojects that displace local communities and repress resistance, and spreading an economic model of inequality that leaves little or nothing to impoverished families with children to feed.

Ending policies that generate violence and repression, like the war on drugs and inequitable development practices, could fairly quickly give Central American families the option to stay home. This doesn’t even require more U.S. aid.

These arguments are well known, and yet the “solutions” coming out of the White House place the onus on Mexico. Trump’s statement reads: “If the illegal migration crisis is alleviated through effective actions taken by Mexico, to be determined in our sole discretion and judgment, the Tariffs will be removed.”

Donald Trump’s “sole discretion and judgment” is not a reasonable criterion in a critical binational relationship.

In the end, Mexico might not have anything to worry about. Trump faces some serious obstacles on the home front. His misuse of the Emergency Economic Powers Act, according to experts, will certainly spur lawsuits to block the tariff imposition.

Many Republican leaders are not on board either. Senate Finance Chair Chuck Grassley came out stating bluntly, “I support nearly every one of President Trump’s immigration policies, but this is not one of them.” CNN reports that Treasury Secretary Steven Mnuchin and advisor Jared Kushner warned Trump against the measure.

U.S. trade and manufacturing associations have predictably reacted in a panic, noting that the tariffs would punish U.S. consumers and put in jeopardy entire industries that rely on cross-border supply chains. The National Association of Manufacturers wrote: “These proposed tariffs would have devastating consequences on manufacturers in America and on American consumers.” Industry and trade groups are rushing to Washington to lobby against the Mexican tariffs.

But so far, instead of backpedaling — as he did on his “I will close the southern border” threat — Trump is trying to assemble defenders. One of the few willing to enter the fray is trade adviser Peter Navarro. Navarro accused Mexico of “exporting illegal aliens,” which he described as a business model (although the vast majority of immigrants are Central American and, under economic theory that he ostensibly has some familiarity with, when you export something you normally receive something for it).

Even the estranged Steve Bannon jumped in, gleefully anticipating a scenario where the tariffs against Mexico are applied in full: “The ratcheting up to 25 percent will get their attention,” he gushed.

South of the border, AMLO’s Secretary of Foreign Relations Marcelo Ebrard praised AMLO’s letter (in which he undoubtedly had a hand). The AMLO government has been criticized domestically for a crackdown on immigrants in response to Trump pressures. Now AMLO could gain backing from the Mexican population, and a large part of the U.S. population, if he follows through on promises to stand up to immigration policies that are becoming increasing unpopular even in the United States.

The problem is that the Mexican rhetorical defense of a different approach to immigration — one that respects human rights and addresses structural causes — is not what the government itself is doing on the ground. After initial signs of a change in policy, in recent months the Mexican government has upped deportation, detention rates, and raids. A May report from human rights groups on the Mexico-Guatemala border found a “focus on militarized security” and a “strategy of exhaustion and containment” similar to the United States.

Mexico has a lot to lose and a lot to gain. Both countries announced plans to begin the ratification process for the new trilateral accord that would replace NAFTA. Trump seems to be using the tariffs as leverage against the Mexican government and against Democrats, who have called for modifications to the agreement.

AMLO’s government wants the new NAFTA, but says it’s not willing to do anything more to get it. Agriculture and some manufacturing would be heavily hit, but what they’re more concerned with is the markets. In the long term, Mexico wants to free itself from U.S. economic dependency, in part to avoid being a political hostage. But that’s a long process, and the country can’t afford major disruptions just as AMLO’s signature social programs go into effect.

AMLO also wants to consolidate his image as a reformer — rarely has a president been so focused on legacy so early in the game. Straddling what appear to be contradictory policy goals is creating a crevasse he risks falling into unless makes a clear choice between caving to the abhorrent and coercive policies from the north or building a model that puts human security first and refuses to use Central American refugees as a bargaining chip.

For his part, Trump needs these tariffs to look tough. The latest threat is part of a campaign strategy that’s just getting into swing and depends on hostility toward Mexico and immigrants. This means that the untenable and too-often deadly situation this creates for families will get worse, as manufactured blame for a manufactured crisis is used against forces that oppose the white supremacist agenda.

What he isn’t factoring in, according to many on his own team, is the blowback. The U.S. stock market fell further than the Mexican market when the tariffs were announced. Higher consumer prices, broken supply chains, retaliatory tariffs on U.S. goods, armed white men in border communities, and rampant hate crime is not a pretty scenario for 2020.