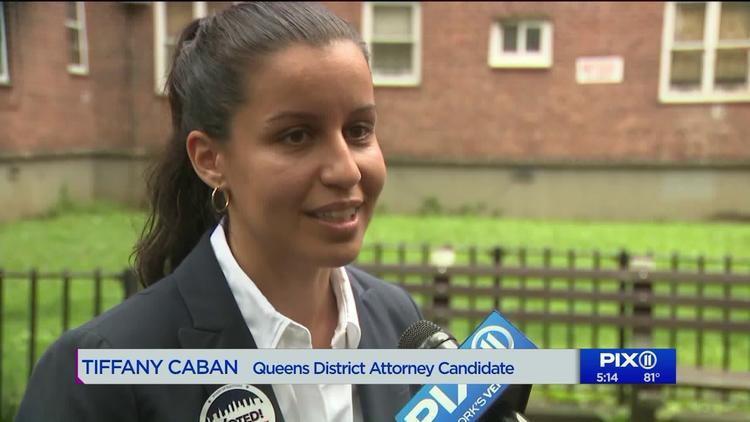 Democratic presidential hopefuls Bernie Sanders and Elizabeth Warren both endorsed Caban, a 31-year-old former public defender, breaking with the elitist Cuomo wing of the party, which opposed her.

Could Queens be a bellwether? With a population of about 2.64 million, it is larger than 15 of our 50 states– bigger than West Virginia or or Delaware or Maine or North Dakota. It also rivals Los Angeles as one of the more ethnically diverse places in the U.S. The pollsters always like some town in the Midwest, say Indiana, as a harbinger of national politics, but Indiana doesn’t actually tell you much about America in general. Some 14% of Americans are African-American or multi-racial with some Black identity. In Indiana that proportion is 10%. In Queens, African-Americans with non-Hispanic heritage came to 17.7%. Latinos make up 18% of Americans but only 6% of Indianans. Latinos are 27.5 percent of Queens’ population. Asians are 5.6 percent of Americans but only 2 percent of Indianans. Asians are 22 percent of Queens residents.

Indiana, in other words, looks like the America of the 1950s after decades of Nazi-like country quotas were enshrined in the 1924 immigration law and in the whole institution of the Asian exclusion policy.

Queens, in contrast, looks like the America of the future. And it is no accident that it is giving us young politicians determined finally to unleash the potential of people power and redress the sordid injustices of America’s increasingly unequal plutocracy.

Caban stands for ending cash bail, the system whereby when poor people have bail set for them, if they cannot pay it immediately, they are sent to prison– often for no more than a ticket. The system assumes that everyone is middle or upper class and has spare money for an unexpected expense like bail. But studies show that only 40% of Americans could cover a $1,000 emergency from their savings.

A ticket should be a means of helping people correct potentially damaging behavior, not a way to put people in jail for minor offenses. Predators throughout the system make money off of these practices– in some instances cash bail is a way of filling up privately run jails to keep their profits healthy. As Oren Schweitzer of Jacobin notes, 58% of the incarcerated are AFrican-American or Latino, even though together they make up only 32% of America’s population.

“End Mass Incarceration in Queens, Make Queens a Model for the World.

Prosecute Less. Our District Attorneys must focus on putting the work in to obtain the best and safest outcomes for the community, not convicting the greatest number of people. As District Attorney, Tiffany Cabán’s office will use its prosecutorial discretion to decline to charge sex work, recreational drug use, and racist laws.
End Cash Bail. Cash bail penalizes people before they are judged guilty and creates two systems of justice – one for the wealthy, one for the poor. As DA, Tiffany will pursue and invest resources in pretrial services that give people the tools they need to live and succeed.
Charge Misdemeanors with Restraint. Raise the charge standard for misdemeanors from probable cause to beyond a reasonable doubt. Too often, racially biased prosecutions trap people in the system when they are most vulnerable.
Seek Shorter Sentences for Felonies. There is no evidence harsher sentences make communities safer; all they do is keep more people in jail longer and waste resources.
Advocate Against Death by Incarceration. Too many people die in prison. Indefinite incarceration is wrong; parole should be presumed when there are no serious disciplinary issues.

Decriminalize Poverty and End Racist Law Enforcement.
End Broken Windows Prosecuting. As DA, Tiffany will decline to prosecute crimes of poverty and instead go after wage theft and bad landlords.
End Civil Asset Forfeiture. Prosecutors are incentivized to seize property, because that money goes to the their budgets. District Attorney Cabán’s office will never receive financial benefit from a decision to prosecute; no DA Office should.
Reform Court-Imposed Fines and Fees. District Attorney Cabán’s office will work with courts and defense attorneys to consider a defendant’s ability to pay any imposed fines and fees.
Reinvest Any Proceeds in Services. Any property or money District Attorney Cabán’s office obtains from legal process or grants will go directly to investment in housing, job and education services that evidence shows actually reduce crime.
Require Racial and Economic Impact Analyses of All Charges. The public has a right to know the economic and racial impact of charges filed.
People-Powered Justice Means Racial, Social, and Economic Justice. It Means Safe Communities.
Demilitarize Law Enforcement, Rebuild Community Trust. Community policing means more than hiring more police for some communities. Implicit bias training is not nearly enough. Police and District Attorneys should resemble, come from, live in and listen to the communities they protect, and make services the focal point for intervention.
Target the 6% who Commit 60% of Crimes. Declining to prosecute cases that pose little or no threat to public safety will allow DA Cabán’s office to focus resources on the small number of people who commit the majority of crimes and lead criminal enterprises.
Invest in Schools, Healthcare, Jobs and Housing – Not Jails. Freeing up resources from mass incarceration will allow us to reallocate the $143,000 per prisoner currently spent on on jails. Investing in schools and our kids will make our communities safer. Giving people housing, healthcare, and career opportunities reduces crime. Evidence shows us that the path to a better future is education, not incarceration.
End the War on Drugs.
Decriminalize Recreational Use of Marijuana and Other Drugs. Cannabis has been used by more than half of Americans yet communities of color are disproportionately punished for use of cannabis and other recreational drugs. District Attorney Cabán will not prosecute recreational drug use that does not pose a threat to others.
Treat Substance Use Disorders as a Medical Issue. All evidence points to treatment, not incarceration, as the best way to mitigate harm from substance use. Doctors and nurses, not police, are trained to handle these issues.
Deploy Harm-Reduction Strategies to Combat the Opioid Epidemic. More Americans die from overdoses than car accidents. District Attorney Cabán’s office will seek to provide first responders, teachers, employers, and organizations across Queens with naloxone and other life-saving interventions, including educational outreach and overdose training.
Work with Safe Injection Facilities. Testing for drug impurities and providing medical treatment to people suffering from use disorder can save thousands of lives. Facilities providing these services reduce overdose deaths in surrounding areas by 30% and help communities heal. Each site reduces epidemic-related costs by millions of dollars and provides critical services that meet people where they are.
Decarcerate and Restore Communities.
Establish a Retroactive Release Unit. People currently incarcerated for offenses that are no longer being prosecuted will be released.
Establish a Record Review Unit to Clear Records. Convictions for offenses that are no longer being prosecuted should not prevent people from being employed or getting housing.
Create a Reentry Services Unit to Reduce Recidivism. The best way to prevent repeat offenses is to provide people leaving prison with the basics every person need to live in society, such as housing, job help and education.
Protect Immigrants from Fraud and Abuse. Immigration is not a crime; it is the foundation of our country. Too many abuse our immigrant communities and use fear of deportation against them. ICE is an abusive, renegade agency. Families have a right to be together, and District Attorney Cabán will fight for that right.
Prosecute ICE. DA Cabán will prosecute ICE agents who exceed their authority and endanger our communities under all of New York’s relevant statutes and ordinances. Abusive conduct by ICE illegal under New York law will be prosecuted.
No New Jails. Tiffany Cabán supports the No New Jails movement in opposing the Mayor’s plan to construct new jails. Rikers needs to be closed, and faster than the proposed timeline. But the solution must focus on community-driven responses and services, and decarceration with housing and career help; Cabán for Queens is the only DA campaign with a plan to center community decisions. Constructing cages is wrong. Closing Rikers can be done, more quickly, through replacing cash bail and pretrial detention with holistic services, and reducing recidivism. Every time new jails are built throughout this country’s history, they are filled – and overcrowded. The cycle must stop.
Tackle Corporate Crimes.
Investigate and Prosecute Abusive Landlords. Bad landlords should not be landlords. If they have property in Queens, they will be held accountable in Queens. Bad landlords will be forced to provide adequate housing.
Hold Drug Companies Accountable for Overprescribing. Prescriptions motivated by profit, not public health, rake in billions of dollars in blood money. Companies and doctors that over-marketed or overprescribed these drugs despite knowing their dangers must be brought to court.
Establish Corporate Crime, Consumer Protection, Wage Theft and Antitrust Units. Discriminatory, monopolistic practices and fraud can destroy neighborhood economies. Employers stealing wages forces people to make drastic choices to survive. With Amazon declaring its intention to move in, the most vulnerable communities are likely to get disrupted and marginalized again unless we pursue innovative and proactive enforcement against discriminatory, monopolistic policies and practices that destroy our neighborhood economies.”

After the US doughboys trooped off to Europe in 1917, a saying grew up that “you can’t keep them down on the farm after they’ve see gay Paree.”

The question is whether the Democratic primary voters, who skew to the left of the party in most states, can be satisfied with the corporate establishment candidates after they have seen what is being accomplished in Queens. The corporate Democrats were complicit in all the bad public policy-making on behalf of wealthy elites that led to the incarceration crisis (the US has a vast gulag of 2.2 million prisoners. For Comparison, China which is nearly 4 times more populous than the US, only has about 1.5 million prisoners! The US is more repressive by far!

Workers don’t have to be without the right to unionize. People don’t have to go to jail for not being able to pay a small ticket or to pay bail. We don’t need to feed private for-profit prisons with the flower of our youth, blighting lives. We don’t have let big corporations get away with wage theft or other practices (even the opioid crisis and the suicide wave has its origins in corporate malfeasance).

Most Americans don’t vote in primaries, and their course very much depends on how excited various constituencies are.

So if this sort of victory that Caban just had in Queens, and if the innovative policies she is promising, energize the leftist Dems to come out and vote in the primaries, she and many other DSA candidates could put some air beneath the wings of candidates like Bernie Sanders, whom corporate media have attempted repeatedly to write off, purely for reasons of class hatred.