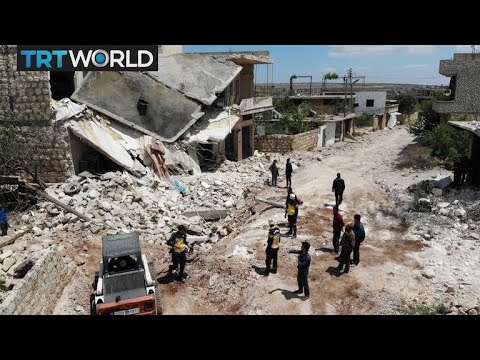 ( Human Rights Watch ) – (Beirut) – The Russian–Syrian joint military operation has used internationally banned and other indiscriminate weapons in unlawful attacks on civilians in northwest Syria in recent weeks, Human Rights Watch said today. According to the United Nations, the area is home to 3 million civilians, at least half of whom had been displaced from elsewhere in Syria.

Since April 26, 2019, the Syrian-Russian military alliance has carried out hundreds of attacks every day across areas in the Idlib, Hama, and Aleppo governorates under the control of anti-government groups, killing an estimated 200 civilians, including 20 children. The alliance has used banned cluster munitions and incendiary weapons in the attacks along with large air-dropped explosive weapons with wide-area effects, including “barrel bombs” in populated civilian areas, based on reports by first responders, witnesses, and open-source material. On May 17, the UN Security Council held a second emergency meeting to discuss the situation in Northwest Syria but failed to identify a way to protect civilians there.

“The Syrian-Russian military alliance is using a cocktail of internationally banned and indiscriminate weapons on a trapped civilian population,” said Lama Fakih, acting Middle East director at Human Rights Watch. “Russia has abused its position at the UN Security Council to protect itself and its ally in Damascus, and to continue these abuses against civilians.”

Fighting escalated in the region in April after a six-month ceasefire. Russia has provided military and political support for the Syrian government as it bombed over 20 health facilities out of service since April 26, including those whose coordinates had been provided to the UN and Russia with the explicit purpose of protecting them. May 26 news reports indicated that Turkey was arming antigovernment fighters, in response to ongoing Russian-Syrian strikes.

In the past three weeks, first responders and activists have publicly documented at least 10 attacks using 220mm Uragan cluster munition rockets in addition to attacks with rocket-delivered incendiary weapons, alongside other indiscriminate attacks on civilians using air-dropped bombs. Human Rights Watch investigated one cluster munition attack on May 19, and a second attack using a large bomb dropped from the air on May 23, and reviewed open-source material and interviewed one first responder for three incendiary weapon attacks – on May 13, 25, and 26.

The May 19 and May 23 attacks killed at least 13 people, including 3 children, according to local witnesses and first responders.

Cluster munitions can be fired from the ground by artillery systems, rockets, and projectiles, or dropped from aircraft. They typically open in the air, dispersing multiple bomblets or submunitions over a wide area. Many submunitions fail to explode on initial impact, leaving dangerous duds that can maim and kill like landmines for years. Incendiary weapons, which produce heat and fire through the chemical reaction of a flammable substance, cause excruciating burns and destroy homes and other civilian structures.

As one witness to a May 23 cluster munition strike in Kafr Nabl put it: “Cluster munitions are the worst, because they are used with the intent to mainly harm humans. All the shrapnel. And then if they don’t explode, the risk remains – it prevents you from moving in your own house.” Several 9N235 fragmentation submunitions from the Uragan cluster munition rockets were found at the site of the attack that had not detonated on impact or self-destructed, based on images provided to and reviewed by Human Rights Watch.

Human Rights Watch also reviewed open-source material shared by first responders and activists after the May 25 incendiary weapons attack in Khan Sheikhoun, Idlib. Human Rights Watch assessed a time series of satellite imagery and identified extensive burn scars on agricultural land along the western side of Khan Sheikhoun, consistent with the video and testimony. These burn scars measured approximately 175,000 square meters in total area and were the result of intense fires occurring within a 24-hour period between the morning of May 24 and 25, 2019.

With the Turkish border closed, and no other areas remaining under the control of antigovernment groups, civilians in affected areas who fear persecution in government-controlled areas effectively have nowhere to flee the violence.

While Russia and Syria announced the creation of two humanitarian corridors from Idlib, residents told Human Rights Watch that they do not want to evacuate to government-held areas for fear of persecution. Residents also said they did not have the money for shelter and transportation to relocate to safer areas either within or outside Syria.

As a member of the joint military operation, Russia is jointly responsible for unlawful attacks by the Syrian government. Providing weapons or material support to a country or nonstate actor knowing that it is likely to use them in a serious violation of international law creates risk of complicity for the supplier/supporter. Russia should urge its ally to immediately stop unlawful attacks and the use of prohibited weapons.

Russia has used its veto to prevent the UN Security Council from adopting meaningful measures to protect civilians from unlawful attacks in Syria. Members of the UN Security Council and concerned countries should make clear to all parties to the conflict that there will be no normalization or business as usual so long as the Russian-Syrian alliance employs these unlawful tactics, and that those responsible for violations will be held to account.

Other countries widely condemned the use of incendiary weapons in Syria at the November 2018 meeting of the Convention on Conventional Weapons. More than a dozen sought to dedicate time in future meetings to discuss their concerns and how to prevent further human suffering from these cruel weapons, which burn their victims and start fires that destroy infrastructure. However, Russia blocked proposals to keep the treaty’s Protocol III on incendiary weapons on the agenda for 2019. Russia was also able to scuttle further consideration about other pressing humanitarian concerns around the use of other weapons, such as antivehicle landmines.

“What is happening in Idlib today is the latest chapter in eight years of failure to protect civilians in Syria,” Fakih said. “But to ensure that the final act is not the tragedy we are anticipating, the Security Council and UN member countries should signal to Russia that it will bear a heavy cost if it does not halt these unlawful attacks.”

May 19: al-Biras neighborhood in Kafr Nabl

In an aerial attack on May 19, between 9 and 9:30 p.m. local time, the Syrian-Russian military alliance struck two houses in al-Biras neighborhood in Kafr Nabl, killing 10 civilians, including 4 children, according to a survivor and second witness. No other countries are operating aircraft in the Idlib region.

They said aircraft attacked 10 or 11 times in the span of minutes, destroying two homes almost in their entirety:

We were sitting inside. Suddenly something, pressure, it moved us. Windows fell. Doors opened up. Glass flew everywhere. It was horrible. The second strike, around a minute, a minute and fifteen seconds later, was similar – you’re sitting and you suddenly hear the explosion, you don’t hear the warplane, you don’t hear the [munitions], you don’t hear anything, except the explosion. The third strike was a minute later. Fourth also, between each strike and another, a minute or less. Horrible day. You don’t hear it. You cannot feel [whether] it is going to hit you or not. Suddenly, flames erupt, and there are stones from every direction.

A relative who had gone running to the homes after the first strike said that due to the intensity of the strikes, he and others were unable to pull people out of the rubble. Both people interviewed provided the names of the casualties, who they said were related to them.

Both said that the munitions used were large bombs dropped from an aircraft based on the noise and extent of destruction, and described a crater from one strike that was 20 meters wide and 10 deep. Human Rights Watch was unable to obtain pictures of the remnants to confirm the type of weapon used, but reviewed images provided by the survivor, which showed a house partially destroyed and significant amounts of rubble and dust.

Both said that there was no military presence or headquarters in the neighborhood, and that the neighborhood traditionally had been one of the safest in the governorate, where people would come when strikes hit elsewhere.

A first responder and three other witnesses said that on May 23, at approximately 11 a.m., the Syrian-Russian military alliance attacked a market in the center of the town of Kafr Nabl, near a health clinic, with eight ground-launched 220mm Uragan rockets, four of which were cluster munitions. Human Rights Watch has determined the involvement of the Syrian-Russian military alliance, based on the munitions, delivery systems, and target areas.

The witnesses said that three civilians, including a 21-year-old student at Idlib University and a child, were killed. Nine more were injured. A first responder who transferred some of the injured to a nearby medical point said that: “People’s bodies are literally littered with wounds.”

First responders and witnesses said that the submunitions popped like gunshots, and that some remained unexploded in the streets. One witness said he saw two of them explode in the air, and estimated that they were launched from south of Kafr Nabl, in the northern Hama countryside.

Activists and first responders provided images of unexploded 9N235 submunitions and a video taken when the attack occurred, which Human Rights Watch was able to use to positively identify the weapon used. The photographs also included a remnant at the site of the cargo section of the 220mm Uragan cluster munition rocket, which carries 30 fragmentation submunitions called 9N235.

Two witnesses said that this was not the first time that they observed the Syrian-Russian alliance using cluster munitions to attack Kafr Nabl. They described an April 4 cluster munition attack that killed at least 14 civilians and injured 30 others. A witness described hearing two loud explosions at around 10 a.m. that day, and then tiny explosions as the submunitions exploded.

He said the attack was very close to his house in Kafr Nabel, and he opened the door of his house to find a woman and child dead nearby. He transported the bodies to the nearest medical point. The witness provided images of the cluster munition remnants, which Human Rights Watch identified as an unexploded Russian/Soviet-made 9N235 fragmentation submunition.

TRT World: ”
The War in Syria: Worst violence in years does not stop for Eid”