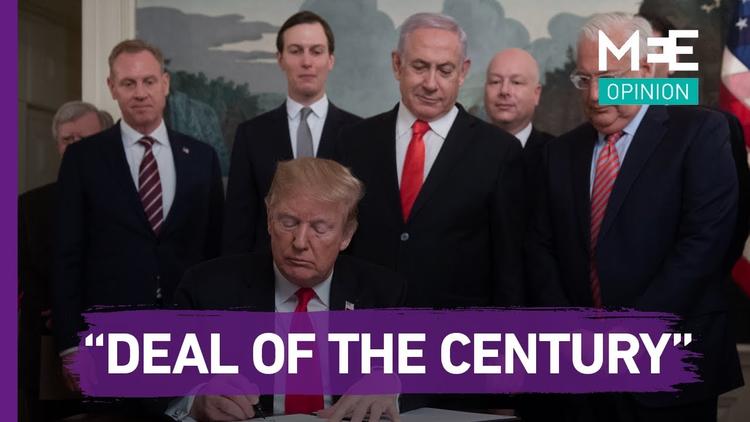 Before this, I would like to note that I read the entire economic chapter of the deal, which was published by Trump’s Zionist staff member, Jason Greenblatt. I found a flood of bright and shiny promises that make the areas inhabited by Palestinians sound like Switzerland, but the PA would have no sovereignty over these areas.

When we talk about the areas populated by the Palestinians, we are only talking about less than ten per cent of historic Palestine’s area. According to what was published, these areas will be an integral part of the Israeli economic and security system. This is despite the fact that it will be autonomous and remove the burden of the security implications from the shoulders of the occupation resulting from its control over the Palestinian population.

If the issue is only about Trump’s plan, it is not going to be difficult in principle to say that it has failed because time is running out and Trump’s term is ending in a little over a year. This is not enough time to complete something in practice. However, the main question is: What if Trump is elected for another term? Will the PA leadership resist his pressures, along with the pressures of the Arabs who have bent to his will, who are more powerful in the practical terms in the Arab space?

The most important question is: Suppose he failed and another president came. Would the new president be able to resist the pressure of the Zionist lobby, which effectively controls the Republican and Democratic parties, and reconsider the overall handling of the Palestinian file?

Recalling the fact that the plan to liquidate the Palestinian cause was an investment in the current fire raging in the region, and did not originally rely on the presence of a man like Trump in the White House, allows us to talk about the remaining dangers, whether Trump returns for a new term or is replaced with someone else.

US President Donald Trump at the White House, in Washington, US on 13 April 2018 [Mike Theiler/Pool/Getty Images]

The idea that Netanyahu has been working on for years, in light of the bleeding of the region in which the two traditional camps (the axis of resistance and the axis of moderation as they were known in the past) were dealt a blow, is an idea involving the technical liquidation of the cause. This is to be achieved by means of changing the current status of the PA into an accepted and recognised status, along with complete Arab normalisation. This could push towards changing the temporary to permanent, even if this includes perpetuating the conflict by making it purely a border or political issue that could go on for hundreds of years. The solution was called the “regional solution”.

While Netanyahu’s plan, backed by the Zionist security and military establishment, is not being implemented by Trump in the manner he intended, Trump’s success is bolstering the dream that the matter will be achieved through a comprehensive and quick signature, rather then in a gradual manner and making the temporary permanent.

Hence, it can be said that bragging about thwarting the deal of the century does not seem to be of value as long as the PA leadership’s political path remains the same, i.e. establishing a quasi-state in the PA’s areas, without disturbing the occupation. They have even ignored the decisions made by the PA references (the PLC and PNC), which stipulate disengaging from the occupation and stopping all security coordination with it. What may hinder the current process is the Arab regimes’ stalling of its normalisation with the enemy out of fear from its people and the nation, more than fear of the PA’s positions if these regimes rush to normalise relations with Israel and begin major normalisation measures with it, the plan will be on its way to success, without the need to sign off on its political clauses. This is because this is not necessary in principle and Israel can live many decades without it.

The result is that the biggest complication in the Palestinian scene: that related to the positions of the PA leadership and the Fatah movement. Without a change in this leadership’s compass, the danger of liquidating the cause will remain, unless the Palestinian people revolt against this through a comprehensive uprising. This is exactly what the PA and Arab and international parties are working to prevent by all means necessary, although there is also the possibility involving regional and international changes that would allow for changes that go against the Israeli dreams, and help launch the Palestinian uprising.

Middle East Eye: “David Hearst on the “deal of the century”