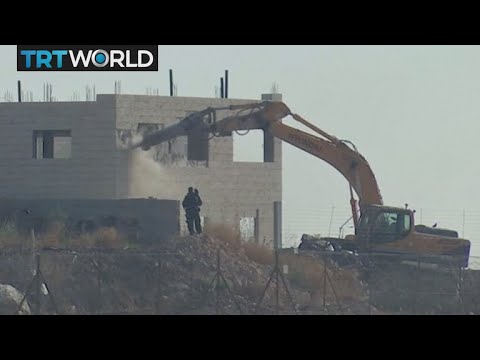 The Israeli occupation authorities demolished 18 Palestinian-owned residential buildings this week in Sur Bahir, just 2 or 3 km from Al-Aqsa, rendering the inhabitants homeless. It was yet another crime intended to boost Israel’s ethnic cleansing of historic Palestine and it coincided with the visit of a delegation of Arab “journalists” to the Zionist state, occupied Jerusalem and Al-Aqsa Mosque.

The delegation included a Saudi blogger who was spat at and called a “traitor” by Palestinians as he entered the mosque. Reports on social media showed the group having to leave Al-Aqsa humiliated and scared for their safety.

The demolitions demonstrated that Arab normalisation with Israel provides an incentive for the occupation authorities to continue their attacks against the Palestinian people as part of the slow genocide which started in 1948. Israel still believes that it is at war and is taking steps to push the Palestinians to leave their homeland of their own accord.

The buildings blown up by Israel were in Area A, which is supposed to be under the control of the Palestinian Authority according to the Oslo Accords. This suggests that the Israeli enemy no longer recognises the Accords, which were in any case voided almost 15 years ago when war criminal Ariel Sharon’s tanks invaded the areas under PA control, besieged former President Yasser Arafat and destroyed his headquarters. Many observers believe that the Israelis finished the job by murdering Arafat.

This week’s events illustrate the desire of Israel to empty Jerusalem and the surrounding districts of the indigenous Palestinian population. It also wants to sever the holy city from its historic West Bank hinterland, which it believes is Jerusalem’s backyard surrounding the Zionist state’s “eternal capital”.

They are also a message to those who have closed their eyes and ears and refuse to face the fact that the enemy’s determination to complete its ethnic cleansing of Palestine is boosted by the ongoing Arab normalisation, which has even surprised the Israelis. The presence of an Arab media delegation in Jerusalem and Al-Aqsa when Israel committed the collective punishment demolition in Sur Bahir is confirmation of what I claim.

Israel’s latest heinous crime is a reminder to us all that the state was founded on the ethnic cleansing of the indigenous Palestinian population and more than 50 massacres committed by what one writer has called “Jewish terrorists” and the nascent “Israel Defence Forces. The consequence of that was the destruction of 520 Palestinian towns and villages, which have been wiped off the map completely, as well as most of the Arab neighbourhoods of major cities. More than 750,000 Palestinians were expelled from their homeland and scattered across the world in that first wave of ethnic cleansing.

It is obvious that Israel will repeat such crimes until the international community ends it hypocrisy and collusion. How much longer can the US give Israel unlimited political, financial and military support, and the Arab states continue their normalisation drive?

Condemnations of the demolitions are just words. No individual state or the UN has bothered to do something positive to call Israel to account for its crimes. We haven’t even heard of any European, Arab or Muslim countries demanding that the UN Security Council or General Assembly meet to rein-in the colonial Zionist state.

What is required of the Palestinian leadership, therefore, is to announce the withdrawal from the Oslo Accords and the cancellation of the agreement, which was assassinated by Sharon’s tanks in 2002 and is now being bulldozed by the terrorist Benjamin Netanyahu. They have buried Oslo under the rubble of the buildings in Wadi Hummus. The Palestinian leadership must withdraw any and all recognition of the state of Israel and call upon people within and beyond Palestine to converge on occupied Jerusalem and launch a new struggle to end Israel’s ability to act with impunity. Normalisation moves should be ended immediately, as should the Palestinian division.