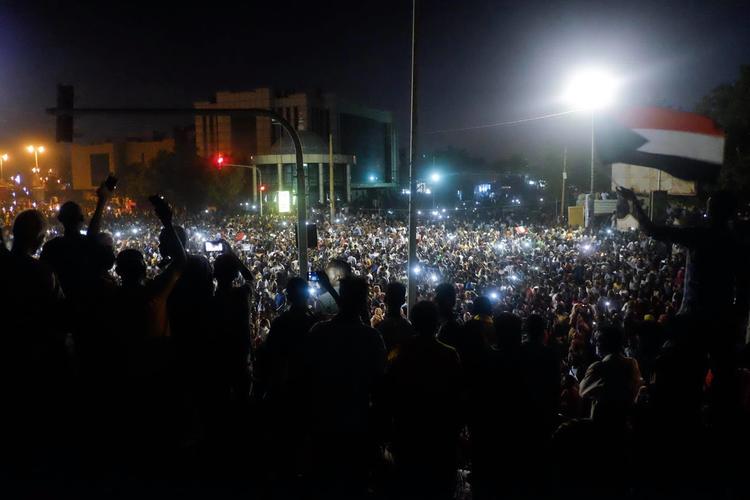 Portland, Or. (Informed Comment) – Almost all reporting on the Sudan crisis has in common is that the reports have been uneven or flat-out incorrect. This pattern has persisted with the coverage of the uprisings against military rule earlier this year, primarily in the characterization of severe conflicts between the Sudanese military and democracy-seeking revolutionaries. This requires context via several explanations.

Reporting from Sudan has been difficult for several structural reasons: The country is difficult to access geographically in comparison to most Arab and African states. Once there, it is difficult to cover because of its huge size and lack of infrastructure. The enormous heterogeneity of the population—597 tribes, 400 languages/dialects, some 200 religious orientations—makes it the challenge of a lifetime to study and simultaneously a paradise for anthropologists.(And a complete opposite to Egypt’s features).

But from a news media perspective the greatest handicap has been the absence of Western news organizations-—AP,UPI,BBC, VoA, DW, NYT, WaPo, FR24, etc— with bureau chiefs in Sudan. So whenever a newsworthy event occurs there, the parent organization dispatches a correspondent either from Cairo or East Africa (Addis/Nairobi) where they all maintain bureau chiefs to look into the issues of Sudan. A few will check with Sudanese in Cairo,Addis or Nairobi which usually leads to a distorted lens because most Sudanese there have been political exiles for a variety of reasons. In addition ,the governments of Egypt, Ethiopia and Kenya have historically been the most unfriendly to Sudan.

I do not blame these reporters for being superficial, but I and my colleagues in the Sudan Studies Association of America could tell them how many years it has taken to get a reasonable handle on this large and complicated country. Five years study was not sufficient for me.

I have been studying Sudan since the early 1960s and was in Khartoum on October 21,1964 to witness the so-called “October Revolution” which terminated the first military regime of General Ibrahim Abboud. I was able to join the National Elections Commission ex officio, studied the parliamentary elections of 1965 (and its predecessors in 1953 and 1958) in great detail which then formed the bulk of my PhD dissertation(Princeton 1968). All in all I have been to all 9 original regions of Sudan, lived for 3 years among the public and have returned to the country in 16 different years spanning over half-a-century(last time in Darfur in this decade.)

Now to the current crisis/confrontation. From NPR to PBS to almost all other news reports we are told that the Transitional Military Council in charge of the government after the ouster of long-time dictator Omar H.A.al-Bashir in April is resisting turning the controls over to civilians seeking democracy.
This may be true of 5-10% of the total population and perhaps 15-20 % of those in the Capital area(whom we can see on tv clips). But this is incorrect on multiple levels: a) the demonstrators are not shouting or writing that they want democracy, they want civilian rule.

More precisely, as in the mislabeled “Arab Spring” they have shouted and written on hand- held signs Al-SHA’B YURID ISQAT AL-NIZAM–The People want the Fall of the “System.” Despite how the demonstrations have often been reported, the masses haven’t demanded democracy. Of course, some young English-speaking students with smartphones emphasize democratic rule, just as was the case in Tunisia, Egypt, Yemen, Bahrain, Libya and Syria earlier. They are, however, only one component of a much larger opposition that had come together under one umbrella for the first step: to rid themselves of a despised regime. This was true of the above cases and the Iranian Revolution of 1978/79 as well.

The subsequent problem arose from step 2: how to forge a coalition of diverse interests that did not see eye-to-eye on many fundamental matters. So in the demonstrations outside the military HQ complex right by the University of Khartoum grounds were young students remembering earlier anti-military uprisings against Abboud and Numayri. There were women of many ages who have felt discriminated against. There were refugees from Darfur (well over a million living in the Khartoum region) and opponents from the war-torn South Kordofan and Southern Blue Nile Provinces where regional rebellions have been festering for more than a decade. In the geographic center divisions festered among the Congress Party and National Congress Party, both Islamist in orientation but divided over whether to support Omar al-Bashir’s regime. Beyond these current and former rulers during the past 30 years of the “Revolution of National Salvation” (1989- present), there are the followers of a dozen diverse Sufi orders (turuq), who have formed coalitions and counter-coalitions among Sudan’s political parties since before independence in 1956.

It is precisely this mishmash of opposition groups, reminding me of the Syrian uprising and not at all of Tahrir Square in Cairo which was a simple choice by comparison, that has caused the dragging outof the negotiations. The military leadership and most of the rank-and-file do not want to hang onto power, as has been the case in Algeria, for example. But they know their own institutional history if nothing else: The junta of LG Ibrahim Abboud was invited by Prime Minister Abdallah Khalil to take over in November 1958 to restore order to what had become chaotic health and government services resulting from parliamentary gridlock. The chaos was removed, but the junta decided to stay on for another 6 years until student demonstrations pressured them to leave. An organization of “Professionals”,e.g. teachers, doctors, lawyers, journalists helped with the transition to democratic elections, but were sidelined by having virtually no support beyond the relatively upscale neighborhoods in the Capital areas.

Traditional religiously based political parties took over for 4 years until the May 1969 Revolution of LG Ja’far Numayri, who abolished all parties and tried to downgrade the turuq . He hung on for a surprising 16 years until he was ousted in a fashion similar to Abboud. Another Transitional Council prepared the elections one year later (April 1986) which led to “democratic government” under Prime Minister Sadiq al- Mahdi. As we now know, this ended in June 30,1989 when the Islamist group headed by Omar al-Bashir took over, ostensibly to put an end to regional conflict in South Sudan, Darfur, Kordofan and some other remote areas.

No one, Sudanese or Sudan specialist, could have imagined a 30-year dictatorship by a man of limited intelligence and experience. (I interviewed him.) He compensated by strengthening his security services, who put down uprisings with un-Sudanese brutality. They are also the ones suspected of committing the killing spree of June 3 when roughly one hundred died. They in turn have claimed that these camps were inhabited by Darfurian insurgents, not peaceful demonstrators as reported in the West. Hard to judge from here, but both explanations are plausible. It is interesting to note that their military commander has been branded by Western media recently as the brutal butcher of Darfur of one decade ago. Who is pushing what here ?

We do know that Egypt, Saudi Arabia and UAE are all opposed to Islamic rule. Right now the military leadership and much of the civilian opposition in Sudan favors the Muslim Religious Right. Once the new rulers of Sudan recall the 14,000 or so Sudanese troops fighting in Yemen’s civil war on behalf of Saudi Crown Prince Mohammed Bin Salman and de fact United Arab Emirates ruler Mohammed Bin Zayed, their financial support for Khartoum may disappear. Meanwhile, hopes for a more inclusive and possibly more “democratic” regime may lie with the intercession of mediators from Ethiopia and the African Union. Building trust among all parties will take longer than in the past. All Sudanese professionals, military or civilian, should know this. The kids on the streets must learn to be patient; their answer lies in studying their own histories. Keep out Egypt, yes. Keep out Saudi Arabia and theUAE, hopefully. In the absence of such strategic rent from abroad, however, will any new Sudanese government have the wherewithal to provide to the Sudanese public the economic progress (and even just survival) they are demanding?

Peter Bechtold is Senior Adjunct Professor of Political Science at Portland State University and the author of Politics in the Sudan (Westview Press).