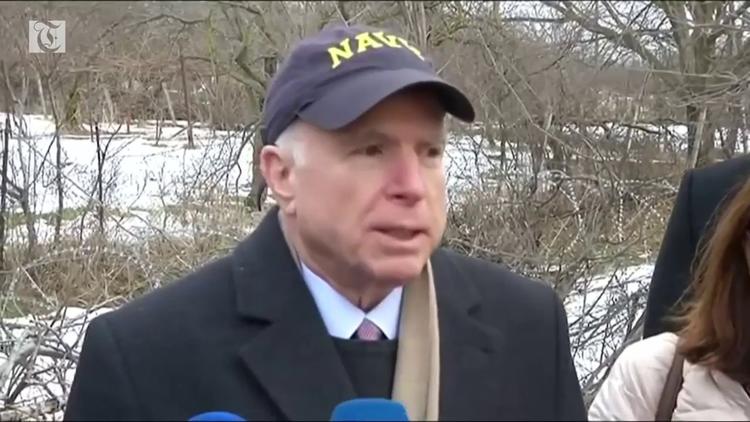 A video of Sen. John McCain from the 2008 presidential campaign wherein he disagrees with a woman at one of his campaign rallies about Obama being “an Arab” has gone viral again. It is being contrasted with Trump’s insouciance as his blackshirts chanted “send her home” concerning Rep. Ilhan Omar (D-Minn.).

People who are holding McCain’s performance up as an improvement on Trump are not entirely wrong, but they are missing some key points. McCain defended Obama as not being an Arab, and called him a family man, implying that Arabs are not family men. McCain never got away from denigrating Vietnamese with racial slurs and was at times connected to some racially intolerant groups.

McCain chose the far right Sarah Palin as his running mate, and although he would not let her or his campaign staffers explicitly play the terrorist card against Obama, he did put up with some pretty damning innuendo.

So this canonization of St. John is misplaced. It also helps hide the race problem that elements of the Republican Party have had for a very long time (Barry Goldwater’s libertarianism was driven by opposition to the Civil Rights movement).

John McCain quickly shed his last vestiges of decency when he allowed his campaign to try to smear Barack Obama for having been in the same room with Bill Ayers, who had been a Weatherman in the 1960s when Obama was a child. McCain knows very well that Obama is a centrist, not a radical, that Ayers had long since been rehabilitated and has ties to the Republican governor of South Carolina, and that Obama had very little to do with Ayers. The ‘terrorist’ charge is supposed to work subliminally, and to subconsciously suggest other smears. In contrast to Obama, McCain was closely associated with an extremist organization, the US Council for World Freedom of John Singlaub. I showed that he went on associating with it long after he claims to have resigned.

So having created this foaming-at-the-mouth mob, McCain finds himself booed by it when he offers some pro forma boilerplate about Obama being decent and a family man. But his campaign ads haven’t been alleging decency, they’ve been alleging “terrorist ties.” You can’t wave raw meat dripping blood at Doberman Pinschers and then suddenly pull it away without producing snarling, baring of incisors, and straining at the leash.

The McCain attempt to connect race and terror on a subliminal level in his advertising, while projecting an image of taking the high road in his public appearances crashed and burned on Friday when he did not notice he was engaging in racist hate speech:

McCain stood shaking his head as she spoke, then quickly took the microphone from her.

“No, ma’am,” he said. “He’s a decent, family man, a citizen that I just happen to have disagreements with.” ‘

McCain should have said, “there would be nothing wrong with being an Arab, but Obama is not.” The way he put it strongly implied that he had a low opinion of Arabs.

An Arab is a native speaker of the Arabic language, which is akin to Hebrew. The Arab civilization is one of the more glorious in world history, having bestowed on the world great scientific and cultural achievements. Arabic is spoken in North Africa and West Asia by approximately 250 million people [420 million in 2019]… 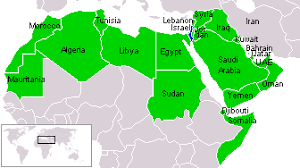 Arabs began immigrating into the United States in the 1880s from Lebanon, and have been an important ethnic group during the past over a century. They provided everything from auto workers to physicians and comedians. There are probably three million self-identified Arab-Americans, and as a group they are slightly wealthier, younger and more educated than Americans in general. (If we counted everyone with at least an 8th Lebanese ancestry as Arab-American, they would be many millions, but most don’t self-identify that way). Arab-Americans are more likely to own a business than the average American. Until very recently, they were slightly more likely to vote Republican than Democrat (they are now trending Democrat). They are potential swing voters in Michigan, Ohio, Pennsylvania, New Jersey and Florida.

Here is the video.

That confused woman probably did not mean “Arab” but “Muslim.” (She later said she was afraid America would become a Muslim country.)

But Arab is a linguistic identity whereas Muslim is a religious one. Not all Arabs are Muslims. The Copts in Egypt (6% of the population) speak Arabic but are Christians. Likewise the Maronites in Lebanon and many Chaldeans and Assyrians in Iraq. About 7,000 Jews living in Morocco speak Arabic at home.

Mr. McCain, Arab-Americans and Muslim-Americans are decent, family-oriented citizens. The only thing wrong with calling Obama by either of these modifiers is that it would be incorrect. He is not an Arab ethnically, but rather northern European and Luo (Nilotic). He is not a Muslim but a Christian.

McCain’s insinuation that “Arabs” (whether he and his friend actually meant “Muslims” or not) are not decent and not family-oriented and not citizens is obscene.

Ralph Nader, one of McCain’s rivals for the presidency, is an Arab-American, and McCain owes Mr. Nader and all Arab-Americans, indeed, all Americans, a huge apology.

As with his self-professed “hatred” of “gooks,” McCain’s suddenly revealed attitude toward Arab-Americans is extremely troubling.

Former Secretary of State Colin Powell’s response to this sort of issue was much better, which was, “So what if Obama were a Muslim?”

What if he were muslim? Colin Powell on Muslim Americans.