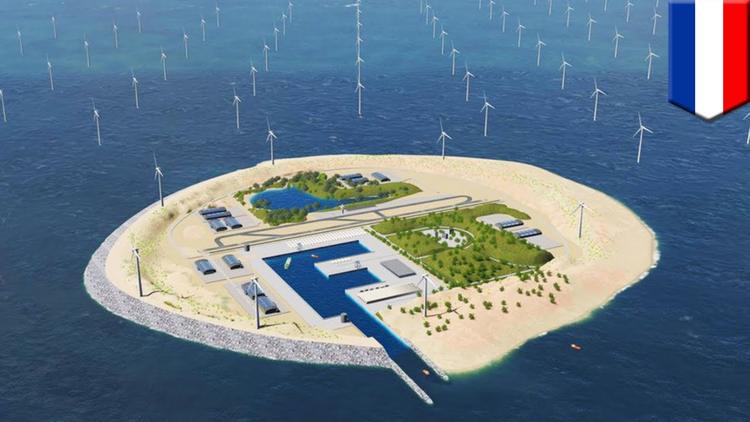 Several European grid operators have proposed to build at least ten artificial “energy islands” as wind power hubs in the North Sea to make use of large-scale offshore wind energy in meeting the continent’s climate targets. According to the North Sea Wind Power Hub (NSWPH) consortium – which includes TenneT, Energinet, Gasunie and the Port of Rotterdam – a possible trans-border offshore grid project between Denmark, the Netherlands and Germany could play an important role in the countries’ transition to a low-carbon energy system.

“The North Sea holds a large potential for offshore wind power,” say the grid operators, such that if this “hub-and-spoke” concept is implemented, 180 gigawatts offshore wind power could be generated by 2045. After 2030, it will be possible to develop several hubs that will act as central platforms for supporting the infrastructure required to transport the energy, for example to convert electricity into gas (power-to-gas) instead of using the offshore converter platforms commonly used today, they say based on several feasibility studies.

According to the consortium, a coordinated international approach could connect and integrate large-scale offshore wind more effectively and with significantly lower costs compared to continued individual national planning. However, the grid operators do not give an estimate of the costs for such an endeavour and call on governments to change regulation to make it possible.

Until recently, the consortium had explored the possibility of building one large artificial island in the North Sea to serve as a hub for offshore wind turbines with a capacity of more than 100 gigawatts, a vision first presented in 2016. Offshore wind is an important pillar of Germany’s energy transition, with a total of just over 1,300 turbines already spinning in the country’s territorial waters in the North Sea and the Baltic Sea in 2018. Lobby groups say the government should allow for faster capacity growth, and that the country’s 2030 target for offshore wind capacity should rise from 15 to 20 GW.