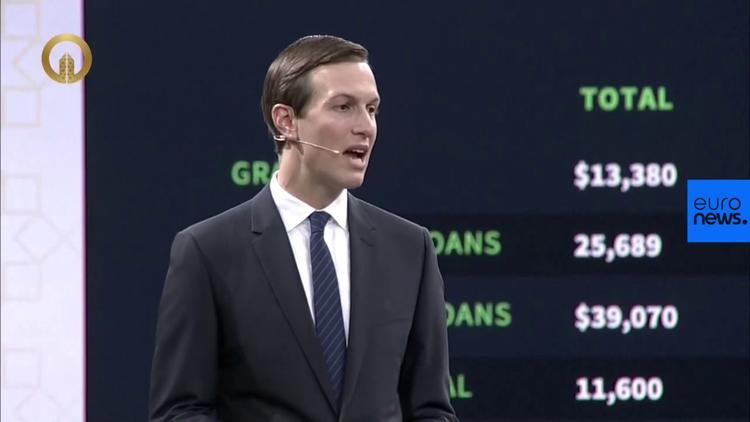 ( L’Orient Le Jour) – Had Mr Kushner taken the trouble to consider all the losses, the shattered lives, separations and humiliating defeats endured by the Palestinians, had he made any attempt to gauge the price paid by Palestine’s neighbours – Lebanon, Syria, Jordan and Egypt – over the last seventy years, he would have felt ashamed. He would not have dared to deliver his speech in Bahrain. He would not have been able to step coolly over so many graveyards. He would have abstained from pinning a dollar price tag on them. He would have started by offering his condolences to the Palestinian people and to the whole Middle East, still endlessly counting its dead, its wounded and its refugees. He would have looked for a word or a phrase that could soothe memories. He would have helped his Israeli allies to recognise the wrong done by the creation of the state of Israel. Had he the faintest idea what it means to suddenly lose your village, your home, your olive field and your age-old memories, he would have named, unprompted, all that was taken from the Palestinians by force.

He would have given existence to their history before presenting them with road networks and telling them what their new face will look like. He would not have spoken of the Palestinian people in the third person singular. He would have looked at them directly. Instead of beginning with finance, he would have started by suggesting to the Israelis that they relinquish a minimum, their colonies, and to the Palestinians that they give up the maximum , in other words three-quarters of their former territory . He would not have spoken only to the bankers and businessmen of the oil-producing monarchies. His thoughts would have turned to the millions of Arabs who are ignored and mistreated, rather than to millions of crisp new dollar bills. He would at the least have been cautious, felt his way, worn gloves. Had he been prepared to imagine Jerusalem as it was fifteen years before his birth, he might have hesitated to call for it to become Israel’s capital. He would have understood that everyone must let go of the city so that it can belong to all.

Who is responsible for the dispossession of Palestine, the Arabs or the Israelis? And where does Mr Kushner plan to raise the sum of 50 billion dollars to fund his projects? From the vast fortunes of the Gulf States, which are entirely dependent on the United States for their security. Is it because Kushner views the Arabs simply as filthy rich or as flunkeys that he has so little to say to them while asking for so much? True, the Arab rulers have done nothing to counter their reputation for selling out, but must the oil money that has caused them to lose any shred of decency have the same effect on the so-called “civilised” powers? Where does Kushner get the right to treat the history of such a great misfortune by means of receipts from real estate promotion and cosmetic surgery? Does he seriously think that peace bought today at the cost of dignity will last into tomorrow?

There is no point in denying that the Palestinians have lost the battle (not to mention the Arabs), and that the balance of power is undeniably in favour of the Israelis. The issue is not to turn back the clock and certainly not to endanger the lives of Israelis. The opposite in fact. It is time to recognise defeat and think about the future of the Israeli and Palestinian peoples, bearing in mind their histories and traumas. This means listening to their memories. It means enabling an Israeli now living on the former land of a Palestinian or beneath the arcades of an old Arab house in Jerusalem, to imagine what life is like today for the families of the former owners of those properties, who are now living in refugee camps or in exile on the other side of the world. It means enabling a Palestinian to imagine the nightmare of the Nazi genocide that preceded the foundation of the state of Israel. It is to do the opposite of Kushner’s incendiary friend Benyamin Netanyahu. It means helping the Palestinians to lose what they had and the Israelis to offer something other than what they took, to understand that it is up to them to compensate the Palestinians, including financially.

It is up to them to understand that Lebanon would not have suffered fifteen infernal years of war had it not been for the presence of hundreds of thousands of Palestinians on its territory, that Hezbollah would have no military presence there now had the organisation not been formed in resistance to Israel. It is for the Israelis to end their colonisation. It is for them to make room for others in order to protect their own. The highways and bridges that Kushner and his father-in-law want to build using Palestinian masons must first be built in people’s minds by masons of a different sort – the artisans of memory on both sides. This effort of recognition has been missing from every peace agreement, all of which have lamentably failed; yet is a precondition without which all the constructions of the Israelis and Americans will collapse.

“Pro-Israeli” lobbies, not a “Jewish lobby”

I should like to end by addressing the members of AlPAC, an organisation that Jared Kushner knows well from the inside. We are all aware – notably through information that has escaped the censors – that this lobby functions on the basis of intangible principles that include portraying the enemy in the most menacing light, controlling narratives and discrediting any initiative that might suggest that truth is a good held in common. I can understand the fear – phobia even – that leads to this clenching and the relentless construction of an enemy. But I would ask a simple question: does AIPAC have any kind of peace plan? And if it does, what reciprocal renunciations and concessions does that plan involve? We need to know. For with all due respect to Kushner, nearly three-quarters of American Jews do not share his views, or those of Netanyahu, AIPAC or their great allies the evangelical Christians, who provide them with considerable political and financial support.

Over 75% of Jews in the USA voted Democratic in the mid-term elections last November. In the Arab countries the public are not always aware that there is no such thing as a “Jewish lobby” in the USA, only “pro-Israeli lobbies”. They are unaware of the ever more evident disagreements and conflicts in those circles. As Jonathan Weizman put it in the New York Times, “There are roughly 5.7 million Jews in America. Increasingly, they see the world in starkly different ways.”

Zionist pressure groups include J Street which, in its own small way, is openly seeking a peace solution. AIPAC is not. We need only read the incendiary critique of J Street by David Weinberg, Vice-President of the Institute for Strategic Studies in Jerusalem, to understand that internal divisions are no longer the monopoly of the Arabs and Muslims. In the Jerusalem Post Weinberg writes that J Street has become “an organization that spends almost all its time and money besmirching Israel, smearing AIPAC and other leading American Jewish organizations, boosting US-Iran relations, and backing political candidates for whom promoting BDS is a badge of honor.”

In addition to being untrue, these words reveal the degree of panic in the lobby that Kushner blindly obeys. If he really believes that the Arabs are inferior and has no desire to learn more about their culture and history – its golden age and its endless dark chapters – that is up to him; but in that case he should stick to what he knows: doing business, not making peace. He should leave it to others – from both sides rather than one – to find the political, moral and financial means to turn the page.

Signs of recognition
The pro-Israeli one-upmanship of the Trump administration will most probably do far more damage to Israel than the efforts of its worst enemies. Be that as it may, seen from the outside, the disaster area that the Middle East has become at least makes it possible to place basic human solidarity, on however limited a scale, above solidarity based on ideology, faith or ethnicity, all of which have failed. In this devastated region where every country is an open wound, every action must begin with a consideration of what does not work and with a desire to do things differently, a shared desire to push back against hate.

Away from politics proper, away from the steamroller of the great powers and their means of intimidation, away from any local exercise of terror, away from official governmental and media calendars and the merciless course of history that makes us wake up every morning with the thought that, logically, there is nothing to be done, there remains the vast invisible space in which thought retains its powers, like the inner life of a prisoner in his cell. It is a place beyond borders and walls, travelling from one head to another, from Baghdad to Cairo, Amman, Damascus, Tel-Aviv, Gaza, Beirut and Jerusalem, never asking who is Shia, Sunni, Jew or Christian, who is this or that. The building of this mental space, patiently constructed from signs of recognition, is the only thing that can one day enable the peoples of the region, Israelis and Palestinians included, overcome their fear that giving up hate would be an act of betrayal or failure. Victor Hugo said that the past is the key to the future. In this part of the world the past has served as a lock, keeping eyes and doors shut. Today there is no solution possible without a sustained effort of memory and imagination, of which Kushner and friends are entirely ignorant. A country too has a soul, a reason to exist, which cannot be saved simply by restoring its façade. Money may rule the world, but it will never buy one inch of a country’s soul.

Dominique Eddé is a Lebanese novelist and essayist, whose works include Kamal Jann, Kite, and The Crime of Jean Genet, published in English by Seagull Books and translated by Ros Schwartz. Her new book, soon to be published, is “Edward Said. His thought as a Novel” (Verso, august 2019).

(This article was originally published in French in L’Orient-Le Jour on the 13th of July 2019. It was translated by Trista Selous)

Reprinted from L’Orient Le Jour with permission of the author.