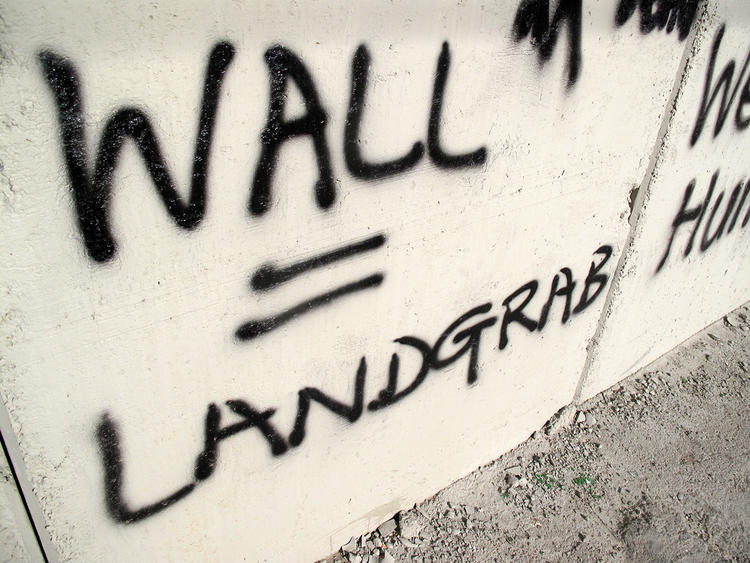 (Yes! Magazine) – The institutions responsible for harming people operate across borders far more than most people realize, yet many groups are joining forces to gain strength.

The latest judicial rebuke of President Donald Trump’s proposed border wall arrived just in time for July 4, when a federal appeals court again blocked the administration from diverting $2.5 billion in military funds toward the wall. But as history shows, court orders aren’t always effective in halting construction or expansion of walls that “divide neighborhoods, worsen dangerous flooding, [and] destroy lands and wildlife,” as the Sierra Club explained in a statement following the court’s June preliminary injunction.

As part of Grassroots International’s work defending the human right to land, water, and food, my colleagues and I engage in conversations with farmers worldwide. One topic surfaces time and again with those from the U.S.-Mexico border and Palestine: how to resist the walls carving up their communities.

Just a few days before the ruling blocking funds for Trump’s wall, 49 Palestinians—including eight paramedics and one journalist—were wounded protesting the Israeli barrier fencing in the people of Gaza.

Graffiti on the West Bank wall. Photo by Grassroots International

Today marks 15 years since the International Court of Justice offered a glimmer of hope that the situation of Palestinian farmers might change. On July 9, 2004, the ICJ issued an advisory opinion deeming Israel’s West Bank wall illegal, calling on Israel to dismantle it and pay reparations for any damage caused, and reaffirming the duty of all states to ensure Israel ends its violations of international law.

For Palestinians and those of us who have stood by them in their long struggle for freedom, this was a rare victory. Israel, however, has yet to heed a word of the ruling. As the U.S. continues to shield it from international pressure while bankrolling its military occupation, Palestinian families living closest to the wall suffer the most.

According to a 2015 report by the Applied Research Institute-Jerusalem, 60% of affected communities reported that the wall had deprived them of water resources. By the time the wall is complete, it’s likely Israel will have taken nearly 15% of Palestinians’ agricultural land there. Including the broader impact of Israel’s military occupation and settlement expansion, the loss goes up to 63% of Palestinians’ agricultural land in the West Bank.

This isn’t the only militarized barrier Israel has built. There’s one along its border with Egypt that’s meant to keep out African refugees. This southern wall has been praised by Trump as a model for the U.S.-Mexico border. In fact, the U.S. is already employing Israeli border technology used to destroy Palestinian communities and enforce racist immigration policies.


A Palestinian farmer in a greenhouse in the village of Kufr Al-Labat. Photo by Grassroots International.

What’s happening to Palestinians is not simply something happening “over there.” Elbit Systems of America, a subsidiary of an Israeli company, is making millions off militarizing the U.S.-Mexico border. Elta North America, another such subsidiary, was paid between $300,000 and $500,000 to build a prototype of Trump’s wall.

The institutions responsible for harming people operate across borders far more than most people realize, yet many groups are joining forces to gain strength.

Resisting what’s been described as “the wall industry,” organizers around the world like the Stop the Wall Campaign in Palestine, solidarity and human rights groups in Mexico, and others are coordinating advocacy efforts as part of a #WorldWithoutWalls campaign. As a member of La Via Campesina, an organization that includes over 200 million small-scale farmers and Indigenous peoples from 81 countries, Palestine’s Union of Agricultural Work Committees has been organizing with others facing threats to their livelihoods. 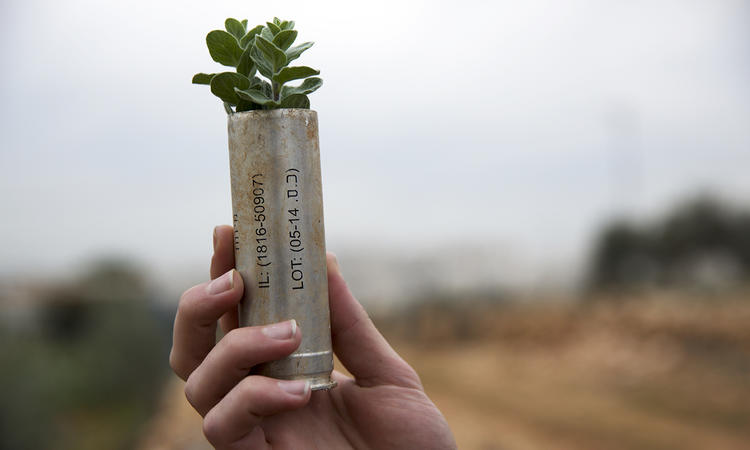 Palestinians use the spent shells of tear gas canisters fired at them by Israeli soldiers. Photo by Sam Vinal.

We cannot allow walls and borders to divide, fragment, and isolate us. Those fighting uphill battles miles away need our support and solidarity in order to persevere. Their victories will create a more just and peaceful world for us all. I’m reminded of Angela Davis’ insistence on the “indivisibility of justice.” Ultimately, 15 years after the ICJ ruling, it’s clear that the courts alone will not deliver justice. We need indivisible solidarity among those of us who reject racism, and who value human life and dignity more than profits.

Chung-Wha Hong is the executive director of Grassroots International, an organization that partners with social movements to create a just and sustainable world by advancing the human right to land, water, and food through global grantmaking, solidarity, and advocacy.