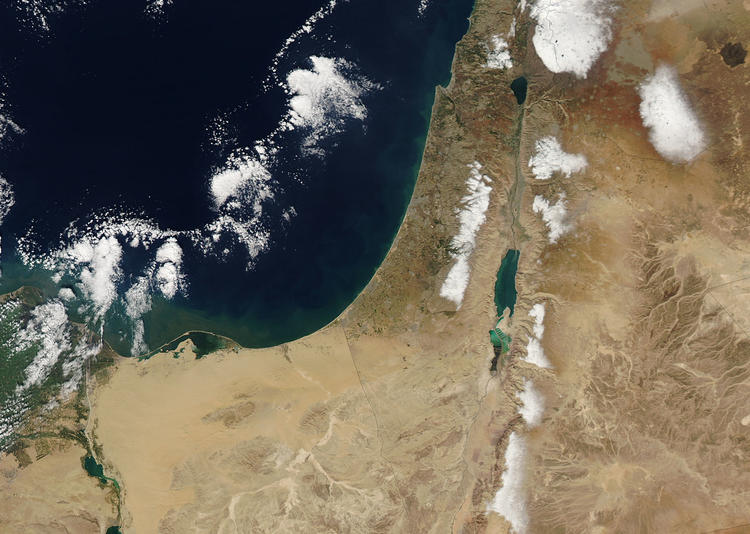 Bipartisan legislation passed by the US Congress in 1997 limits the quality and availability of satellite imagery of Palestine-Israel. The Kyl-Bingaman Amendment (KBA) to the US National Defense Authorization Act was passed under the pretext of protecting Israel’s national security. It prevents US satellite operators and retailers from selling or disseminating images of Palestine-Israel at a resolution higher than that available on the non-US market. The amendment’s interpretation has been confusing and contradictory in terms of meaning, geographical scope, and legal implications. Its result has been over two decades of limited access to clear satellite imagery of Palestine-Israel.

The kinds of research carried out with geospatial data include environmental, geographic, and humanitarian surveys. From an archaeological, geographical, geological, and botanical perspective, high-resolution imagery enables researchers to understand, identify, and document landscape changes. The KBA is in fact an act of censorship, posing serious obstacles for the preservation of cultural heritage and the monitoring of the decades-long Israeli occupation, including documenting home demolitions, territorial disputes, and settlement growth.

Moreover, the KBA has become obsolete and does not serve its intended purpose. In the 22 years since the KBA was passed, the satellite imagery sector has developed significantly, such that a growing number of non-US satellite imaging companies now offer very high-resolution images of Palestine-Israel with a resolution of 0.4-0.7 meters (in line with the global average) as compared to the 2-meter restriction imposed by the KBA on US companies. Meanwhile, US federal agencies are slowly losing their ability to successfully restrict access to imagery by third parties on the basis of national security and/or foreign policy interests.

The KBA harms US business, since US companies are not able to compete internationally due to the regulatory restrictions on the sale of detailed imagery of the region. Indeed, the Aerospace Corporation warned of the amendment’s effect on the US market in 2017: “As foreign competitors reach and possibly surpass the resolution level that US operators can sell without restriction, policymakers must reconsider whether government-imposed restrictions on the availability of the highest quality US products still make sense.” In other words, while these restrictions may have been introduced in line with Israeli national security concerns, technology has overtaken policy and US operators are being disadvantaged.
The Kyl-Bingaman Amendment has become obsolete and does not serve its intended purpose Click To Tweet

The availability of satellite imagery through open-access platforms only confirms the hindrance created by the KBA. In fact, so absurd is the KBA that Israel itself provides free high-resolution satellite imagery of the territories it controls (modern-day Israel, the Occupied Palestinian Territory, and the Golan Heights), rendering the KBA utterly pointless while also belying the claim that the KBA serves Israeli national security interests.
Reassessing the KBA

Since Michael Fradley and Andrea Zerbini’s groundbreaking 2018 journal article and Al-Shabaka’s policy commentary of the same year, both of which call for a reassessment of the KBA, the amendment has come under greater scrutiny. However, there is little evidence to suggest that a policy change is imminent. Rather, the US Department of Commerce and its National Oceanic and Atmospheric Administration (NOAA) – the bodies tasked with administrating the KBA – continue to evade and defer discussions about its efficacy.

The KBA was supposed to be reviewed regularly, but only in 2017 – a decade after its inception – did NOAA finally undertake a formal review, issuing its findings in late 2018. NOAA concluded that high-resolution imagery of Palestine-Israel was not “readily and consistently available” from non-US sources, and that as such it could not recommend a change to the amendment.

While a detailed report on NOAA’s methodology has not been published, the review method appears to have consisted of NOAA staff attempting to purchase imagery and subsequently reporting the results. However, their logic was circular, as the KBA itself was the major obstacle NOAA staff faced, as US citizens, in their attempt to acquire high-resolution images. Foreign researchers, on the other hand, have been able to purchase uncensored high-resolution imagery from both non-US sellers and US resellers, demonstrating the anachronistic nature of the legislation. While one can only speculate the exact reason for NOAA’s reticence, there is likely to be pressure from the Department of Commerce and the current White House administration to maintain or even strengthen the KBA. This is a clear instance of politics overriding common sense.
Recommendations

1. NOAA should publish a report on the methodology used in their 2018 report as a matter of urgency, and undertake a more rigorous review of the KBA.

2. Disposing of the KBA and modifying the regulations of the Department of Commerce and NOAA would level the commercial playing field between US and non-US imagery providers. This would allow satellite operators to share high-resolution images of Palestine-Israel on widely-used open-access platforms and ensure their continued international competitiveness. It would also enable archaeologists, researchers, and humanitarians to accurately document changes on the ground and allow for better accountability of the Israeli occupation.

Zena Agha is Al-Shabaka’s US Policy Fellow. Her areas of expertise include Israeli settlement-building in the occupied Palestinian territory with a special focus on Jerusalem, modern Middle Eastern history, and spatial practices. She has previously worked at the Economist, the Iraqi Embassy in Paris, and the Palestinian delegation at UNESCO. In addition to opinion pieces in The Independent, and The Nation, Zena’s media credits include the BBC World Service, BBC Arabic and El Pais. Zena was awarded the Kennedy Scholarship to study at Harvard University, completing her Master’s in Middle Eastern Studies.