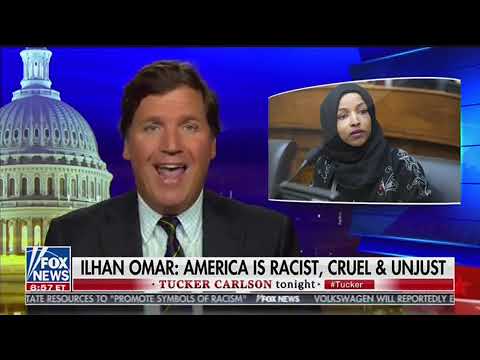 Tucker Carlson has veered further and further toward unadorned white nationalism as Rupert Murdoch’s declining “Fox News” has failed to find viewers in the younger generation and risks losing cultural influence. Having positioned itself on the right of the Republican Party, once it lost the Young Republicans it had no choice but to try to appeal (more so than ever before) to the ten percent of the United States that tends toward white nationalism and forms of neo-Nazism.

Nothing ticks off white nationalists more than having African-Americans in high office, as we saw demonstrated for the eight years Barack Obama was president. All of a sudden the “tea party” had to “take our country back.” Never mind that it was mostly astroturfed, with hundreds of PO Boxes rented by billionaire black money donors. To the extent it was real, it was white people on the far right who have a thing about race. The congressmen elected on the tea party ticket had as their primary goal to ensure that Obama was not allowed to pass any significant legislation, something in which they succeeded except for Obamacare, which they interpreted as a white people’s give-away to African-American and Latino families.

It therefore comes as no surprise that Carlson is obsessed with Somali-American Congresswoman Ilhan Omar (D-Minn.), one of only three Muslims in Congress.

Carlson’s basic argument is that Omar should be so grateful for America’s blessings that she should never criticize anything about the US.

Carlson has never been exactly what you would call a rocket scientist, but the stupidity of this argument is so galactic that if it were an evolving animal it would just abruptly go extinct and take several nearby species with it as unfit to occupy any environmental niche whatsoever.

Carlson argues that Omar is a poster child for why we should change our immigration system. Rep. Omar’s family were refugees, who came into the US through a completely different system than the immigration bureaucracy. The US only took in 22,491 refugees last year under Trump, so there isn’t an actual crisis here unless it is the crisis of the US not pulling its weight on taking in refugees compared to civilized countries like Sweden.

As for taking in immigrants, if we don’t do that we will shrink on down to being a small country with no young workers, which would not exactly make America great again. The US mainly brings in educated or skilled immigrants, oft with substantial capital, who benefit the country.

Carlson depicts. Rep. Omar as an ingrate. None of us Americans shows our gratitude for the bounties we experience from being Americans by knee-jerk Pollyannaish “patriotism” wherein we never criticize anything about the United States.

The Founding Fathers wanted to encourage and protect dissent. It was one of the reasons for which they rebelled against King George III. They said in the First Amendment:

Congress shall make no law respecting an establishment of religion, or prohibiting the free exercise thereof; or abridging the freedom of speech, or of the press; or the right of the people peaceably to assemble, and to petition the Government for a redress of grievances

Why might Congress like to abridge freedom of speech or the press or to curb public gatherings or petitions? Because high politicians might be afraid of public criticism. The First amendment wasn’t protecting institutions. It was protecting speech and actions, specifically, the expression of dissent.

I once responded to Lou Dobbs’ similar Omar-bashing this way:

Ilhan Omar represents 708,000 people in a district that voted for her by 78.2%; nobody elected Lou Dobbs to anything at all & he represents 1 white nationalist Australian billionaire https://t.co/tylMYNqZv6

That is, people in Minneapolis elected Rep. Omar to criticize and improve the status quo. Nobody elected Tucker Carlson to anything at all, and the main reason he is polluting our national information system is that a far right wing Australian billionaire named Rupert Murdoch took advantage of Reagan’s and Congress’s gutting of the FCC to use public airways and public accommodations to shift the national conversation toward racism and the protection of billionaires’ property at all costs.

By the way, the United States has been much better to Carlson than it has to Omar, what with making a man of limited abilities and intellect and very questionable values a multi-millionaire and giving him a national platform. Yet he called National Security adviser John Bolton a “bureaucratic tapeworm” and criticized Bolton’s push for war on Iran. Carlson was right on both counts, but in today’s Washington, that counts as dissent. By his own lights, and given that the US has given him such a cushy job, shouldn’t Carlson sit down and shut up and let the patriots make the decisions without carping at them from his expensive desk?

And by the way, Carlson here in his dissent exactly agreed with Rep. Omar, who warned against an Iran War on the basis of her own life-experience as a war refugee.

And that is why, Mr. Carlson, the United States needs new blood and needs to take in refugees, so that we see the world in a clear-eyed way and have the benefit of their hard-won vision.