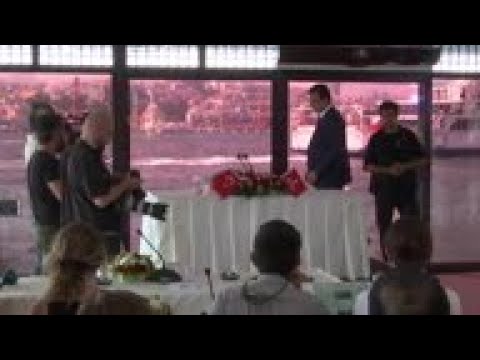 In the end it was easy. Ekrem Imamoglu, the opposition candidate in Istanbul’s municipal election, swept to victory on June 23 with 54% of the votes, after a rerun ordered by the country’s main electoral authority.

The margin of 806,000 votes by which he beat his opponent Binali Yildirim represents the biggest defeat dealt to Turkey’s ruling Justice and Development Party (AKP) in nearly two decades.

The June 23 vote was the second time Imamoglu claimed the mayor’s seat this year.

The first election in March — which he won by around 13,000 votes — was cancelled by electoral authorities.

AKP and its ally the nationalist party MHP claimed minor irregularities in voter records and noted that some of the ballot papers had not been signed.

Following his rerun victory, Imamoglu said that “love won” and that the result would open a new page in Istanbul’s storied history:

“Nobody’s lifestyle and how they dress is a concern for us. We came to embrace everyone,” he said.

The mood was tense in Istanbul on Election Day 2.0.

Many people were resentful of the rerun, which coincided with the holiday period and helped bring the city to a baking standstill.

Horrendously long beeping traffic queues lined the roads leading in and out of Istanbul. Bus stations and the city’s two airports bulged with people leaving the city after casting their ballots.
No ‘us versus them’

His party leader, Kemal Kilicdaroglu attributed the larger margin of victory second time round to “the sense of injustice which people feel (after first elections).”

But it was also clear that Imamoglu had captured the public imagination by championing the sort of inclusive politics that AKP and President Recep Tayyip Erdogan have eschewed in recent years.

The language of love that doesn’t dissociate or frighten won. (It is) fair, promising, embracing.

Istanbul, with a population of 15 million, is of huge strategic importance. Erdogan’s own election as mayor of the city in 1994 launched him as a politician of national standing.

In its early years, AKP’s electoral successes lay in broadening electoral appeal beyond the party’s conservative base, notably to business and the growing middle class.

But as the economy has tanked, and political repression has deepened, more recent campaigns have been soaked in fear-mongering and raw populism.

Imamoglu’s alliance with the nationalist Good Party as well as the pro-Kurdish Peoples’ Democratic Party meanwhile helped him widen his electorate beyond the typical supporters of the CHP.

Yes, Binali Yıldırım; made roads, bridges, tunnels. His actions cannot be ignored. However, the Istanbul people decided yesterday and said: We want a mayor who appeals to people, not to concrete.

Whilst he is enjoying plenty of goodwill for the moment, Imamoglu faces a difficult task meeting the expectations of his diverse electorate.

During the election campaign he complained about wasteful municipal spending and exposed its cost to the budget.

According to his “table of waste’, based on a 2017 audit, the budget loses at least 753 million Turkish Lira (TL), or $133 million through some of this spending.

Moreover, according to Imamoglu, resources and properties amounting to 847 million TL were transferred to foundations with ties to Erdogan and his family.

Having gone public with this information, his office must now show its difference through transparency in administration and policymaking.
Other challenges Imamoglu faces include the city’s chronic traffic and public transportation problem and the growing friction between local Istanbul and Syrian refugee communities and refugees.

Finally, after such a successful campaign, he will have to deal with speculation that he plans to run against Erdogan in Turkey’s next presidential election.

For the moment he has responded to journalists’ questions about his future political ambitions with a single phase: “God knows.”
What next for AKP?

Having earlier gone viral by saying that CHP and Imamoglu “stole the votes” in the initial ballot, Yildirim struck a more conciliatory tone in the aftermath of his second defeat, congratulating his opponent on victory long before the count concluded.

Erdogan also congratulated Imamoglu via Twitter, but added that his party will continue to work toward its goals “without giving up on democracy, rule of law, peace, wealth and stability.”

The sight of the streets of Istanbul crowding with people singing and dancing after Imamoglu’s win will have been chastening for AKP.

“How did this difference come about? What are the expectations of our citizens? These assessments have begun. This is the nation’s choice, which we more than accept.”

If a slightly more humble governing party was the only outcome of Imamoglu’s victory, it would still be an important change.