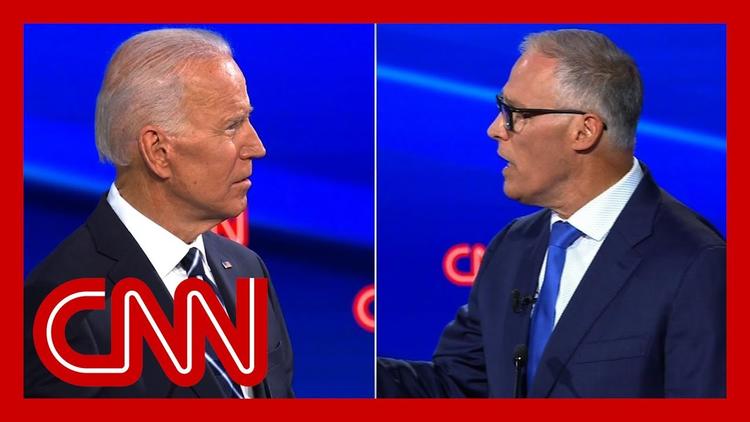 Ann Arbor (Informed Comment) – Despite the reluctance of corporate America, its cable news channels and its favorite candidates to tackle the looming menace of our climate crisis, it came for the Democrats big time in the second CNN debate.

Credit where credit is due; the governor of Washington state, Jay Inslee, was the primary force behind putting the issue front and center. But also, Dana Bash actually asked him an informed question which correctly pointed to a short timetable for action on the issue (though 2050, only 30 years off, is too late to fend off some of the more unpleasant consequences of our current gas-guzzling, coal-and-gas-burning addictions).

” I’m Jay Inslee. I am running for president because the people in this room and the democrats watching tonight are the last best hope for humanity on this planet.

If — if we make defeating the climate crisis the top priority of the United States, we will have a fighting chance to save ourselves and our children’s future. It has to be our top priority. My plan is one of national mobilization, quickly bringing 100 percent clean energy to Americans, creating 8 million good union jobs.”

Inslee is right– the solar and wind industries are major generators of new jobs in the US, and if the US and state governments did more to back them, production of solar panels and wind turbines could also be a much bigger American export than they are now. Since energy is about 6% of the cost of living in the US, inexpensive electricity from free wind and sunlight would also give all Americans the equivalent of a very substantial pay raise, day in and day out. My typical summer electricity bill with my solar panels has been $14 a month, and some of that is the gas stove.

“Look, climate change is not a singular issue, it is all the issues that we Democrats care about. It is health. It is national security. It is our economy. And we know this; middle ground solutions, like the vice president has proposed, or sort of middling average-sized things, are not going to save us.

Too little, too late is too dangerous. And we have to have a bold plan, and mine has been called the “gold standard.” Now, we also need to embed environmental justice. I was in zip code 48217 in the Detroit neighborhood the other day, right next to an oil refinery, where the kids have asthma and they have cancer clusters. And after talking to these folks, I believe this -… it doesn’t matter what your zip code is -… it doesn’t matter what your color is, you ought to have clear -… air and clear water in America. That’s what I believe.”

Actually, Inslee there cleverly attempted to unite several different constituencies behind his robust climate program, including old-style environmentalists who care more about pollution than carbon and social justice advocates who know that the people hurt worst by the pollution caused by big oil are the working class and especially the minorities within it.

He also correctly called out former vice president Joe Biden, whose climate climate crisis program is vague and anemic and as it stands a recipe for disaster.

Biden replied by pointing to his work on the Paris climate accord, which he pledged to rejoin. But that accord allows countries to set their own goals and anyway none of the signatories is anywhere near complying with their own voluntary targets! The Paris accords are aspirational, not so much practical so far. Then Biden also pledged $400 bn. in research and development for net carbon zero energy. But while that is good, R & D is implemented sometimes decades out and we don’t have decades. We already have solar and wind technology. Iowa gets 37% of its electricity from wind. California gets 20% of its electricity from solar. We could get to 100% in the electricity sector, and add in electric vehicles for transportation, very quickly with present technology and its present rate of advances in efficiency and reduction in costs.

“Thank you very much. Look, we have — these deadlines are set by science. Mr. Vice President, your argument is not with me, it’s with science. And unfortunately, your plan is just too late. The science tells us we have to get off coal in 10 years. Your plan does not do that. We have to have off of fossil fuels in our electrical grid in 15. Your plan simply does not do that.

Biden replied that he wants to support charging stations so that all vehicles in the US are electric by 2030. Charging stations are good and would address (irrational) range anxiety with EVs (most trips are 5 miles and a Chevy Bolt gets 220 miles on a charge). But just supporting charging stations won’t in and of itself get people to buy EVs (which are dropping rapidly in price and improving in range).

Biden also said he wants to double wind power, but even the most optimistic forecast for 2019 is that wind could hit 10% of US electricity production. Doubling that is peanuts. At the moment, half of all wind production is in only 4 states, and some states with great potential are dragging their feet. We can do loads better than doubling wind-produced electricity by 2024! Biden inadvertently gave away how unambitious his goals are. Wind will more than double by then with no government help at all.

Biden also talked about ending subsidies for coal, oil and gas, but as Inslee pointed out, that step alone is again a relatively small measure, however advisable.

“YANG: The important number in Vice President Biden’s remarks just now is that the United States was only 15 percent of global emissions. We like to act as if we’re 100 percent, but the truth is even if we were to curb our emissions dramatically, the earth is still going to get warmer.

And we can see it around it us this summer. The last four years have been the four warmest years in recorded history. This is going to be a tough truth, but we are too late. We are 10 years too late. We need to do everything we can to start moving the climate in the right direction, but we also need to start moving our people to higher ground.

And the best way to do that is to put economic resources into your hands so you can protect yourself and your families.”

Yang is right that the US produces 15% of the greenhouse gases in the world annually but does not note that we are 5% of the world’s population, so we are carbon criminals on a per capita basis. He is also right that the 2.4 trillion metric tons of carbon dioxide the world (and especially the US) has put into the atmosphere since 1750 or so has already built in a major set of climate crises. Just in the next 80 years, the lifetime of a baby being born in 2019, sea level will rise about 6 feet, which if you build in storm surges is a major set of disasters waiting to happen all along the extensive coasts of the US, especially the low-lying Deep South along the Gulf of Mexico and the lower land along the Atlantic. New Orleans, Miami, New York, Boston and other major cities will face enormous challenges.

I’m not sure what Yang meant by giving people the wherewithal to try to deal with these changes. Maybe a climate crisis rebate for those most affected? In any case, he is right that planning for climate crisis amelioration now has to be part of government policy.

So, the climate crisis got its moment in the sun, thanks mainly to Inslee and Bash, and the inadequacies of the corporate approach were pretty extensively laid bare.

While Biden is more likely to be president than Inslee, Biden also clearly felt the heat and the point was made that he needs a more robust climate plan if he is going to get past a significant new public constituency in the Democratic Party. Even the general public at least says that it is increasingly worried on this issue.

One lesson of Wednesday night was that business as usual on the climate issue isn’t going to cut it.