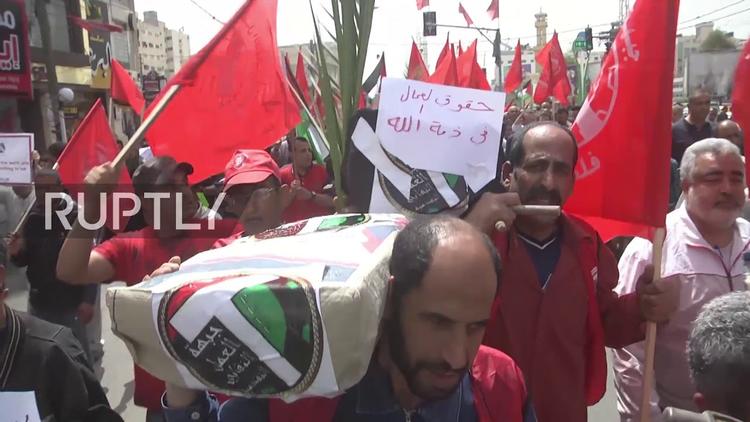 (Middle East Monitor) – At the heart of the Palestinian struggle for basic human rights is the enduring fight of Palestinian workers. While they currently find themselves at the forefront of several battles, extending from Israel to the Occupied Territories and Lebanon, the roots of this war, one that aims at breaking the very will of the Palestinian people, go back decades.

Renowned Palestinian novelist and intellectual, Ghassan Kanafani, was assassinated by the Israeli Mossad in Beirut, Lebanon in July 1972, but only after he left behind a wealth of literature and unparalleled historical analyses. In his essay, “The 1936-39 Revolt in Palestine”, Kanafani believed that the “principal threat” to the Palestinian national movement comprises three enemies, “the local, reactionary leadership; the regimes in the Arab states surrounding Palestine; and the imperialist-Zionist enemy”.

However, little focus is often placed on Palestinian working classes, whether in Palestine or in the Middle East, which is required to develop a coherent analysis, one that is able to link the historical roots of the Palestinian struggle to its present manifestations. Kanafani, however, was aware of these dynamics, which remain in place until this day.

“The change from a semi-feudal society to a capitalist society was accompanied by an increased concentration of economic power in the hands of the Zionist machine and, consequently, within the Jewish society in Palestine,” Kanafani wrote shortly before he was assassinated. In his essay, he linked the collective interests of Palestinian “urban upper bourgeoisie” to the Zionist settlers, due to shared economic objectives. Subsequently, this meant the marginalisation and targeting of Palestinian workers and peasants, who found themselves excluded from the new economic patterns, thus left abandoned and penniless.

The general strike and rebellion of 1936-39 is very much an outcome of that reality. Eventually, “[Palestinian] Arab proletariat had fallen”, according to Kanafani, “victim to British colonialism and [Zionist] Jewish capital, the former bearing the primary responsibility”.

The Nakba – the “Catastrophe” and destruction of the Palestinian homeland in 1947-48 – has done more than forcefully separate most Palestinians and their ancestral homeland. It has also ushered in a new, even more tragic chapter in the war on Palestinian workers, who became wholly reliant on international handouts. The loss of Palestinian land was accompanied by the loss of Palestinian dignity, as exemplified in the plight of refugees, standing in long lines to receive a small ration of food and other negligible supplies so that they could merely survive.

Palestinians can be seen fleeing their homes during the 1948 Nakba, also known as ‘The Great Catastrophe’

Hundreds of thousands of Palestinians were also forced to seek safety outside Palestine. While each refugee population found itself subject to the unique social, economic and political circumstances of its respective, host Arab country, they all carried the same, common denominators: a deep sense of vulnerability, disempowerment and loss.

To further diminish Palestinians politically, the “three separate enemies” of the Palestinian national movement, as described by Kanafani, conspired to make the issue of refugees a mere humanitarian matter, delinked from any meaningful political strategies. To sustain this dismaying state of affairs, Palestinian workers had to remain economically dependent and politically isolated.

The war in Syria has worsened conditions in the Lebanon camps due to the massive influx of a working-class population, whether Palestinians or Syrians that fled the horrific war. With more skilled and unskilled workers, the Lebanon market was saturated, leaving the already struggling Palestinian working class at a greater disadvantage.

The breaking point came in June when Lebanese Minister of Labor Kamil Abu Sleiman decreed that Palestinians in Lebanon must obtain work permits like other foreign workers. While Palestinian refugees protested en mass in Beirut and throughout the refugee camps, they were not only demonstrating against what they rightly saw as an unfair decision, but they were also decrying long, protracted official policies that have created an atmosphere of economic and political alienation.

However, none of this should be analysed separately from the larger struggle facing Palestinian workers elsewhere. The Lebanon story is part and parcel of regional political dynamics, instigated by a shared US-Israeli view that sees the very existence of Palestinian refugees as a problem that must be countered one way or another. While the right of return for Palestinian refugees is a moral imperative and an “inalienable” right that is guaranteed by international law, Washington, Tel Aviv and now even some Arab governments are plotting ways to dismiss that right altogether.

Indeed, many measures have already been taken on that front, such as the US decision to defund the United Nations Relief and Works Agency for Palestine Refugees (UNRWA). While all Palestinian refugees who rely on UNRWA for various health, educational and job services are suffering the consequences of this financial crisis, Lebanon refugees are feeling the brunt the most. In Lebanon, Palestinian refugees feel “harassed” and targeted for merely living in the country where sectarian demographics plays a major role in politics.

Similarly, demographic politics have in fact served as the raison d’être for Israel’s policies towards Palestinians for generations. The ethnic cleansing of historic Palestine in 1947-48, which persists in different forms till today, has been carried out for the purpose of ensuring a Jewish majority in Palestine. Not a single political strategy concerning Palestinians that Israel undertakes fails to keep the subject of the Palestinian “demographic threat” in mind. The construction of illegal Jewish settlements, Jewish-only bypass roads, the Judaization of Jerusalem, the siege on Gaza, the bantustanization of the West Bank and even the “citizenship law” are all designed to repel that imagined Palestinian threat.

Israel, as is often the case, is not the only culprit. The Palestinian Authority (PA)’s manipulation of jobs and salaries as a way to ensure political allegiance or to punish dissidents is a strategy most pronounced in the besieged Gaza Strip. As the PA’s main faction, Fatah, continues its clash with its Hamas rivals in Gaza, Palestinian leader Mahmoud Abbas has repeatedly slashed salaries and altogether denied employment to thousands of struggling Gazans, prompting mass protests, similar to the ones underway in Lebanon.

In fact, Gaza is the perfect illustration of Kanafani’s three enemies of Palestine argument, as the hardship in the Strip has been engineered through three, major players: “the local reactionary leadership (the PA); the regimes in the Arab states surrounding Palestine (Egypt) and the imperialist-Zionist enemy (Israel)”.

It is as if history continues to repeat itself in all of its sordid details. Colonising Israel, conspiring Arabs and self-serving Palestinian leaders are still playing the same old game, while Palestinian workers, the overriding class within Palestinian refugee communities, remain the primary target.