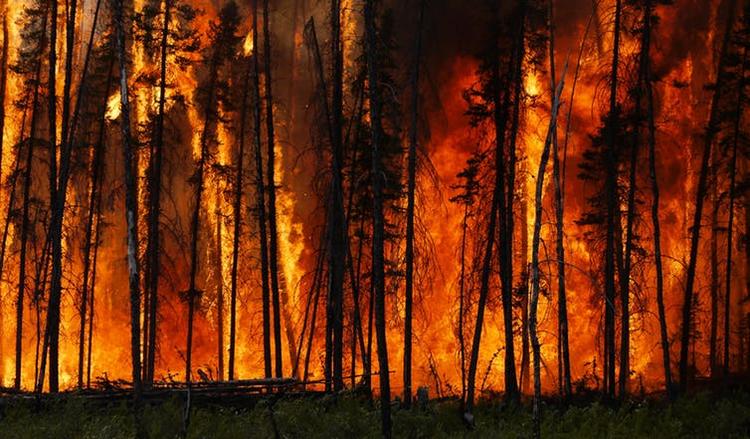 In 2014, we travelled to the northern boreal forests of Canada to set experimental fires that would help us understand the effect of wildfires on the global carbon cycle. Sadly, we never got the chance to set those fires, because the firefighters enlisted to help us were busy dealing with an area the size of Belgium that was already burning.

That wildfire season was the most severe on record in the region, which itself forms part of the wider boreal ecosystem that engulfs much of the Northern Hemisphere’s subarctic lands with coniferous forests shaped by fire.

Thanks in part to the carbon-hungry soils and peatlands they contain, they punch well above their weight as carbon sinks, covering 10% of the world’s land, but storing one-third of the land’s carbon.

According to a new study examining the impacts of Canada’s 2014 wildfires, that stored carbon is under threat. Wildfires are becoming so frequent and intense that they are already turning some boreal forest areas from carbon sinks into net emitters.

Most of the carbon in these ecosystems isn’t stored in the trees, but in the soils below. In the cold and often waterlogged boreal landscapes, organisms living in the soil aren’t able to “eat” dead organic matter that falls onto the forest floor as quickly as in warmer, dryer climates. This allows the soils to accumulate carbon over millennia, making boreal ecosystems some of the most important carbon sinks in the world.

Wildfires, mostly started naturally by lightning, interrupt this accumulation process by burning the trees and the top layer of this organic soil – the latter accounting on average for three times as much of the CO2 released during burning as from the trees themselves.

As part of the natural carbon cycle, the lost carbon is stored again by new trees that use CO2 from the air to grow, as well as by the dead plants, leaves and branches that accumulate in the soil. It can take many decades until all the carbon that was emitted during a fire is recaptured by the ecosystem but – as long as the time between two fires is longer than the time required to recapture that lost carbon – boreal forests remain a carbon sink.

By sampling more than 200 locations, the new research found that more than a quarter of this Canadian forest burned in the 2014 fires was not more than 60 years old – much younger than the average historic time period between fires of one to two centuries in this region.

They used a clever carbon dating approach to show that, for around half of the area of this young forest burnt in 2014, the soil had lost more carbon in the 2014 fire than had accumulated since the previous fire in the 1960s. In other words, the interval between fires was so short that the fire also burned into organic layers that contained “legacy carbon” that was accumulated before the 1960s. Thus, half of the young forest soil had transformed from a carbon sink to a carbon source in this fire-recovery cycle.

Climate change is shortening the interval between fires in boreal regions, leaving less time for forests to regrow. It’s also increasing the intensity of individual fires, allowing them to burn deeper into the soil. These factors mean that more and more of an ecosystem on which we rely so much to remove carbon from the atmosphere could soon fall on the opposite side of the carbon ledger.

That’s true not just for North American boreal forests, but also the vast forests in Russia, China, and other sub-arctic regions covered by the sprawling ecosystem.

We’re currently studying boreal forests in little-researched north-eastern China, where worried forest managers are reporting decreased snow cover and burning of an intensity and extent they have not experienced before.

So what can we do to protect the boreal carbon sink? Given the vast size and remoteness of most boreal fires, comprehensive firefighting measures would require astronomical resources – as has been highlighted by Russian authorities in response to the extensive fires in Siberia this summer.

A better option would be to protect healthy peatlands and restore drained ones, as they can be very effective natural fire breaks – and if they do catch fire they recover carbon relatively fast.

But the reality is that we are powerless to substantially alter the effect of wildfires on the boreal forest system – other than by swiftly cutting our carbon emissions. It’s time for renewable energy to spread like wildfire.