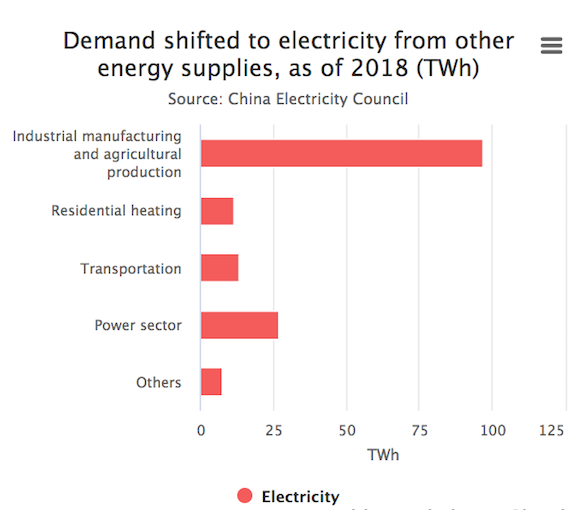 ( ChinaDialogue ) – Using electricity for everything will help lay the groundwork for lowering carbon emissions, but it won’t be easy

As the world belatedly sets about reducing carbon emissions, the struggle between coal power and renewables for the future of China’s electricity system has garnered a lot of attention. But if China is to peak its carbon emissions by 2030 and also reduce them significantly by mid-century, it must get other areas of the economy to stop burning fossil fuels. One way China is doing this is by promoting the use of electricity instead.

Electrification is hard and takes time. Amongst other things, the government must work with industry to replace inefficient coal boilers, get into millions of people’s homes to replace coal heating, and put in place policies to get companies to develop electric vehicles and consumers to buy them.

Doing these things now would make those parts of the economy effectively low carbon as the power grid gets cleaner.

As part of its 13th Five Year Plan, China set itself a clear target for electrification. The government wants to increase electricity use in final energy consumption from 25.8% in 2016 to 27% in 2020. The government worked this out at about 450 terawatt hours over the five years (equivalent to the electrical output from the Three Gorges Dam in that period).

Annual data from 2016 onwards and estimated figures for 2019 and 2020, suggest China will hit its electrification target in early 2020. As of 2018, it had implemented about 110,000 projects that reduced small-scale coal-burning by 600 million tonnes. The main gains were seen in electrification of industrial processes and agricultural production.

Some of the projects include replacing privately owned coal power plants, which supply industry, with cleaner alternatives such as hydropower, wind and solar, as well as higher-efficiency coal power. They include switching oil rigs to run on electricity instead of oil; using electric air conditioning to provide cooling or heating for commercial buildings, urban areas and manufacturing industries. This includes using heat pumps to draw waste heat from sewage, as well as water and ground source pumps.

The State Grid Energy Research Institute calculates that electricity will continue to substitute other types of energy for end users after 2020, reaching 32-38% by 2035 and potentially 47% by 2050. This compares with just 21% in 2018.

As China develops and living conditions improve, people’s energy consumption is expected to increase, with much of that demand met by electricity. In 2014, people in China consumed 3.9 megawatt hours on average, one third as much as people in the US and half as much as those in Japan.

The case for electrification in China is complicated by the fact that it won’t have a zero-carbon electricity system any time soon. Not only does China still rely overwhelmingly on coal for electricity, it is still building new coal capacity.

In part this is because China’s growth in electricity demand rebounded in 2018, hitting 6,840 terawatt hours, up 8.5% on the previous year – the fastest growth in seven years. Of that growth, just 2.4 percentage points was driven by electrification.

Under the 13th Five Year Plan, coal power capacity is limited to 1,100 gigawatts by 2020, but influential bodies are pushing for more. The China Electricity Council, which represents the power industry, has called for 1,300 gigawatts of coal capacity by 2030, up from 1,010 gigawatts now. Not surprisingly, it also sees room for electrification to meet an even larger share of energy demand and wants the 2020 target for electricity use to be increased.

Energy experts see little chance of this happening. Nonetheless, the central government has relaxed restrictions on new coal power this year. The government introduced a traffic light warning system in 2016 that halted coal-fired power in most provinces but in April it gave permission for the “orderly approval” of coal projects in 21 provinces.

The National Energy Administration will decide in late 2021 exactly how much coal power will be allowed as part of the 14th Five Year Plan.

Coal is losing out to renewables

Commenting on climate activists’ concerns about coal expansion, Xu Zhaoyuan, from the Development Research Centre of the State Council, said that the structure of the country’s energy supply is still shifting toward low-carbon power overall.

Figures from the China Electricity Council show that from 2008 to 2018 the proportion of coal and gas power dropped by 15.9 percentage points as wind, solar, hydro and nuclear power expanded.

Zhang Liutong, of energy consultancy WaterRock Energy Economics, told chinadialogue that 2018’s unexpected growth in power demand was met largely by renewables. He attributed this to falling costs, which is making renewables more competitive with coal and gas power.

Furthermore, the recent growth in electricity demand appears to have slowed in the first half of 2019 and was largely met by low-carbon sources.

And renewables like wind and solar are likely to become even more competitive as their costs decline. Wang Jiye, of the China Electric Power Research Institute, said that “in the future new energy sources will sell power to the grid at the standard price without subsidies – and may even be extremely cheap.”

Zhang Weidong, of the China Electricity Council, pointed out at a meeting organised by the Natural Resources Defence Council in mid-May that it is not policy which is limiting the speed and scale of coal-fired power construction; it is a lack of enthusiasm for thermal power (coal and gas) investments. With coal prices rising and increasing environmental pressures, China’s thermal power sector saw losses of 50% in 2018. Thermal power investments were at their lowest level since 2004 last year, and almost 50% down on their 2009 peak.

There are technical and cost challenges in using electricity to replace other forms of energy. The process will need to be driven by new technologies and commercial models. For example, at the moment it is against the law for households and businesses investing in small-scale solar installations to sell unused power to others.

While renewables are increasingly competitive with coal-fired power, unfavourable access to the market and vested interests are limiting investment.

Peng Peng, an expert on renewable energy, wrote in SolarBe that private companies, for example, are keen to develop distributed solar projects but struggle to access bank loans compared to large-scale developers of coal, gas and hydropower.

Also, grid operators regard renewables as increasing system instability. Jiang Liping, of the State Grid Energy Research Institute, pointed out that the intermittency of wind and solar power are huge challenges for grid operators.

Technology can overcome the instability problems, according to Zhang Liutong. “More important than technology is a willingness on the part of the grid to hook up renewable sources and break down provincial barriers,” he added.

Greater electrification also creates significant challenges for the grid in meeting demand. For example, efforts to shift winter heating provision in northern China from coal to electric heating were hampered by power supply issues. Villages on the outskirts of Beijing saw electricity use increase six-fold in the winter of 2017, causing power shortages. In villages outside Beijing, where local grids are less resilient to large and unexpected shifts in demand, it is easier to replace coal with natural gas than with electricity.

Electric vehicles still account for a small amount of overall electricity demand, but that demand is concentrated in certain places at certain times, which adds to pressure on distribution networks. One study in Beijing found that household electricity usage peaks at 8pm, which is also when people want to plug in their cars. Pan Mingyu, of the State Grid’s Beijing Electric Power Research Institute, said that if 1.2 million electric vehicles are sold a year in Beijing by 2030, the existing distribution network will struggle to cope. In the city centre the network is already at capacity and upgrades would be hugely difficult.

Liu Daizong, of the World Resources Institute’s Sustainable Cities project, said that over the past decade China has carried out the relatively easy transport electrification projects – of public buses, taxis and municipal vehicles. Now the focus is on private vehicles. “Use of private vehicles is harder to control and manage and coordinating private vehicle charging with grid capacity will be the focus of the next stage of our research.”

Unless otherwise stated, this work is under Creative Commons’ Attribution-NonCommercial-NoDerivs 2.0 England & Wales License and 2.5 China License.
———

TED: “How China is (and isn’t) fighting pollution and climate change | Angel Hsu”