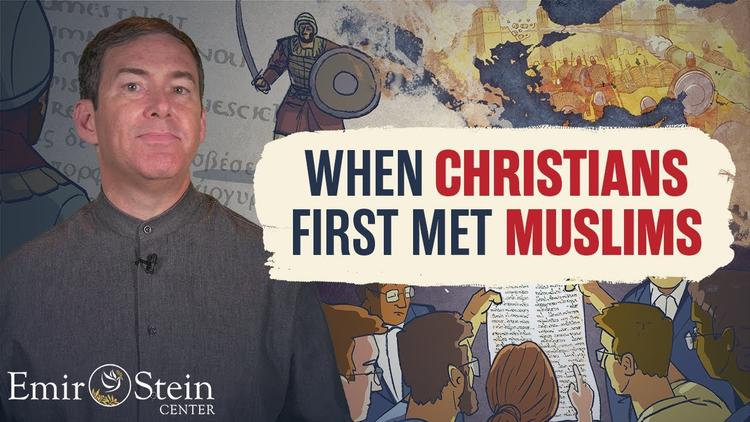 If history matters, then getting right the history of the first encounters of the world’s two largest religions—Christianity and Islam—really matters. In this fascinating video, Prof. Michael Penn, the Teresa Hihn Moore Professor of Religious Studies at Stanford University, sheds light on the extremely important but little-known aspects of the early history of Christian-Muslim encounters. Prof. Penn’s books referenced in the video: – When Christians First Met Muslims: A Sourcebook of the Earliest Syriac Writings on Islam – Envisioning Islam: Syriac Christians and the Early Muslim World (Divinations: Rereading Late Ancient Religion)

Script: If history matters, then getting right the history of the first encounters of the modern world’s two largest religions—Christianity and Islam— really matters. The problem is, we likely have that history wrong. The received story of Christian-Muslim interactions is a story of unrelenting military conflict beginning with Islamic expansion shortly after the birth of the new religion in seventh-century Arabia, and ending with the siege of Constantinople, with a few crusades thrown in the middle for good measure. Now there’s nothing factually inaccurate about this narrative.

The problem is simply that it’s only a small part of a much larger story. Let me explain… Early Christianity is primarily seen as a religion of the Mediterranean Basin that spread with the Roman Empire, and was recorded in Greek and Latin. But, a large number of early Christians lived in what would be modern day Iran, Iraq, Syria, Lebanon, and Eastern Turkey, while generally writing in a dialect of Aramaic called Syriac. Due to a series of fifth-century theological controversies, most western Christians considered these Syriac Christians heretics and essentially wrote them out of history. My own research focuses on how the history of Christianity changes if we no longer ignore that for centuries the geographic center of Christianity was not Rome or even Constantinople but rather Baghdad.

The recovery of this essentially lost history of Christianity profoundly affects our understanding of early Christian-Muslims relations. Again, let me explain… The prophet Muhammad was born around the year 570 in the city of Mecca. According to Islamic tradition, his prophecy began in 610, when he first received divine revelation; in 622, he fled to the city of Medina to escape persecution; there, he and his growing followers thrived, and, eight years later, he triumphantly led a Medinan army into Mecca, where he died in 632. His first successor, oversaw the beginning of a dramatic expansion often known as the Islamic Conquests. Muslim forces experienced unbelievable success in the following decades. In just a few years they took over the entire Persian empire and two thirds of the Eastern Roman or Byzantine empire.

They soon controlled all of North Africa, Spain, and were only repelled in France. In the eastern Mediterranean, military conflicts between the Islamic and Byzantine empire continued for over eight centuries, resolved only in 1453 when Islamic forces finally took the city of Constantinople, what is modern day Istanbul. However, this well-accepted narrative is overly simplified because there are only a handful of modern scholars who can read writings in Syriac from the majority of early Christians who lived under Muslim rule. The problem is if you stick to Greek and Latin sources, you are building your history of Christian reactions to Islam solely on the writings of Christians who were primarily in military conflict with Muslims.

But up to half of ancient Christians lived in the Middle East and had a very different experience with Muslims than did most Greek and Latin Christians, with any military encounters over in just a few years. By the 640s, they were firmly within the Islamic empire. How then would the history of Christian-Muslim relations change if, instead of reading Christians often at odds with Muslims, we focus on Syriac Christians who had daily interactions with Muslims and thus a much more direct knowledge of Islam.
I wrote two books exploring how in the Islamic Empire, these Christians held key government positions, attended the caliph’s court in Baghdad, collaborated with Muslim scholars to translate Greek knowledge into Arabic, accompanied Muslim leaders on their campaigns against the Byzantines, and helped fund monasteries through donations from Muslims—including money from the caliph himself. Middle Eastern Christians ate with Muslims, married Muslims, bequeathed estates to Muslim heirs, taught Muslim children, and were soldiers in Muslim armies. …
Follow us on social media: Facebook: https://www.facebook.com/EmirSteinCenter Twitter: https://twitter.com/EmirSteinCenter Instagram: https://www.instagram.com/emirsteince… Website: http://www.emir-stein.org