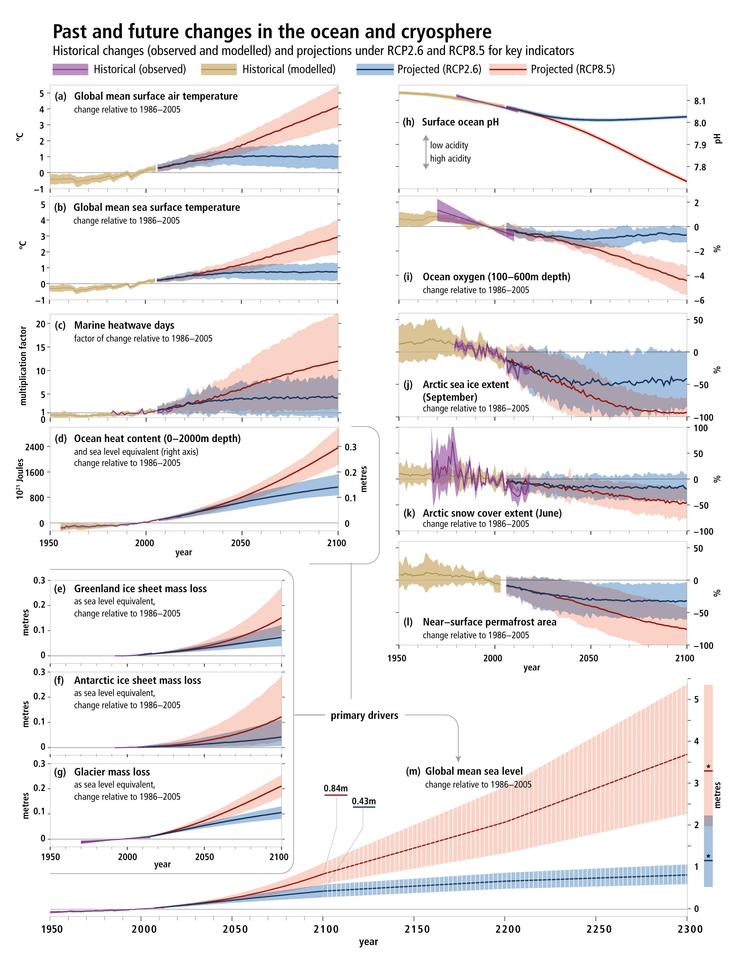 The U.N.‘s climate panel report released Sept. 25 makes crystal clear that the planet’s oceans, snow and ice are in dire trouble and the damage is causing harm to the people who depend on them. Even with aggressive efforts to lower greenhouse gas emissions, many nations will struggle to adapt.

All people on Earth depend on the ocean and cryosphere – the frozen regions of our planet. Together they provide vital services to humanity including food, fresh water and energy. But they also perform critical services, including the uptake and redistribution of carbon dioxide and heat.

Yet, the Intergovernmental Panel on Climate Change Special Report on the Ocean and Cryosphere says human-induced climate change is harming the health and function of the ocean and cryosphere in a number of ways. Glaciers and ice sheets are shrinking. Global sea level is rising at more than twice the rate of the 20th century. The ocean is warming, becoming more acidic and losing oxygen. Fifty percent of coastal wetlands have been lost over the last 100 years. Species are shifting, biodiversity is declining and ecosystems are losing their integrity and function. The strain on the ocean and cryosphere has direct and indirect effects, threatening human health, food security, fresh water and livelihoods.

As a marine scientist and environmental policy scholar who’s worked in the Antarctic for the last 15 years, I wonder if any of this is really news. Earlier this week, the World Meteorological Organization reported similar findings: that the last five-year period has been the warmest on record, ice mass is decreasing, sea level is rising and CO2 emissions are at an all-time high.

Earlier this year, the world’s leading natural scientists released the Intergovernmental Science-Policy Platform on Biodiversity and Ecosystem Services report which confirmed that biodiversity and ecosystem functions and services are deteriorating across the world. Last year the IPCC released a special report on the impacts of global warming of 1.5 degrees Celsius above pre-industrial levels with similarly dire predictions.

There are more details in this latest IPCC report on changes that have occurred in the past few decades. Since 1993, the rate of warming has likely more than doubled; the ocean has already soaked up between 20% and 30% of human-induced carbon emissions since the 1980s, altering the ocean water chemistry to make it more acidic; and marine heat waves have resulted in large-scale coral bleaching, which takes more than 15 years for corals to recover from.

The report notes that communities that live in close connection with coastal environments, small island nations, polar areas and high mountains are particularly vulnerable to changes, such as rising sea levels and shrinking glaciers. But communities in other areas are affected by ocean changes as well, such as through extreme weather events exacerbated by ocean warming.

This most recent report on the ocean and cryosphere is among dozens released during the last 30 years by the IPCC, but its message is the most bold and urgent to date: If the world’s nations do not act with urgency, we – and future generations – will suffer from these changes.

A relatively straightforward solution to curbing biodiversity loss, especially in the face of climate change, is expanding the global network of large-scale protected areas on land and ocean.

While highlighted by the report, the importance of this management practice is also old news. Protected areas have been implemented for years to conserve marine ecosystems, and are now being implemented across the world. Studies continue to show that strict protected areas, which limit or prohibit human use, safeguard biodiversity while also enhancing resilience to environmental impacts, including climate change. Indeed, high-profile initiatives like E.O. Wilson’s Half-Earth Project argue that people must protect at least half of the planet to ensure human survival.

But protected areas are not enough. The report also highlights an even more challenging, yet crucial, component of the solution: Rapid reduction of greenhouse gas emissions must be achieved across institutional boundaries. The global nature of the issue demands a globally coordinated effort toward ambitious cuts in emissions.

The United Nations Climate Action Summit, which convened over the weekend of Sept. 22, intended to do just this. The goal of the meeting was to identify realistic plans toward reducing greenhouse gas emissions by 45% during the next decade and further to net-zero by 2050. Seventy-seven countries announced efforts toward net-zero emissions by 2050. Multiple businesses voiced intentions to follow Paris Agreement targets to reduce emissions.

Widespread climate strikes, led largely by young people, are also a sign of a broader social response to climate change.

But is this enough to stop the degradation of our ocean, cryosphere and larger Earth system?

History shows that communities do change and that crisis can drive breakthroughs. On an international scale, the world witnessed this with the Montreal Protocol, which banned a class of gases called CFCs and halted the deterioration of the ozone hole, driven in part by fear of cancer and other human health issues. Another international victory was achieved when, in the face of potential discord, including a threat of nuclear war, global governments signed the Antarctic Treaty. Doing so transformed the southern continent from a burgeoning scene of militarization to an international commons dedicated to peace and science.

While ecological tipping points have proved impossible to predict, I believe a social one is arriving. The new IPCC Special Report on the Ocean and Cryosphere makes clear that no action on climate change is not a viable path forward.