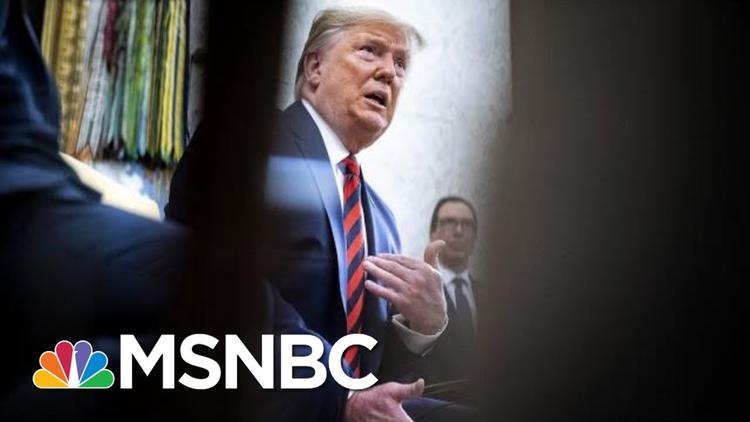 Ann Arbor (Informed Comment) – Trump, being unbalanced, has never dealt well with criticism. In the face of credible charges of impeachable offenses in his July conversation with Ukraine president Volodymyr Zelensky, Trump is unraveling.

Eli Stokols at the LA Times reports that an attendee at a Trump event in New York for his UN ambassador provided an audiotape of his remarks.

Trump said at the event, “Basically, that person never saw the report, never saw the call, he never saw the call — heard something and decided that he or she, or whoever the hell they saw — they’re almost a spy . . . I want to know who’s the person, who’s the person who gave the whistleblower the information? Because that’s close to a spy, . . . You know what we used to do in the old days when we were smart? Right? The spies and treason, we used to handle it a little differently than we do now.”

Rep. Adam Schiff, the chair of the House Intelligence Committee, immediately shot back on Twitter,

“The President’s suggestion that those involved in the whisteblower complaint should be dealt with as “we used to do” for “spies and treason” is a reprehensible invitation to violence against witnesses in our investigation.

All Americans must denounce such witness intimidation.”

The anonymous CIA whistleblower said that the Trump-Zelensky conversation, in which Trump repeatedly leaned on the Ukrainian president to have Joe Biden and his son Hunter investigated (implying that no military aid would be forthcoming otherwise) was only one of many such illegal conversations with foreign leaders.

White House staffers have been stashing the transcripts of these criminal interactions in a special electronic server used for highly classified documents.

The whistleblower also says that the reports of the Zelensky conversation were conveyed to him by several persons, who repeated the same details.

What this means is that there are numerous impeachable crimes and numerous potential whistleblowers who heard them occur or who have reliable reports of them.

He is desperate to prevent more whistleblowers from surfacing and revealing more crimes or more details about the Zelensky shakedown. So he characterizes legitimate whistleblowing as espionage against the US government and hints around at execution, to warn any others who might think about stepping out of line.

In saying he wants to know the identity of the whistleblowers’ sources, Trump is signalling to his toadies, such as Rep. Devin Nunes, and whispering in their ears that they should leak the names as soon as they know it. If Trump manages to out the whistleblower’s sources and damage their careers, they can discourage all those who like getting a paycheck from stepping forward.

This is the sort of tactic former vice president Richard Bruce Cheney deployed against CIA operative Valerie Plame, to punish her husband Joe Wilson for revealing that there was never any solid evidence that Iraq had purchased uranium from Niger. And to discourage other intelligence personnel from blowing the whistle on the falsity of Bush-Cheney propaganda about alleged Iraqi nuclear weapons (which never went beyond the drawing board).

Trump Wants To Know Whistleblower’s Sources, Says To Deal With It Like ‘In The Old Days’ | MSNBC