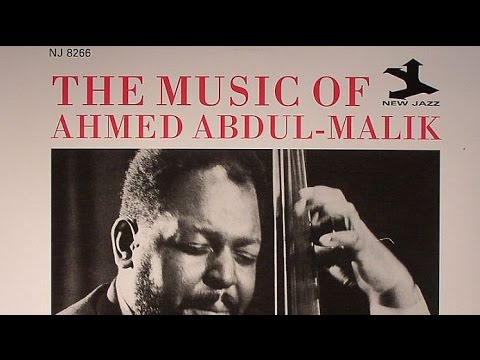 (Informed Comment) – On John Coltrane’s breakthrough album Live at the Village Vanguard album (1961) there were many musical innovations, and the sound of an instrument new to jazz, the oud. The oud, staple of Middle Eastern music – and ancestor of the lute and guitar – was played by Coltrane’s bassist, Ahmed Abdul-Malik.

Just a year before the Village Vanguard date Coltrane told an interviewer that he was listening to ‘Eastern music,’ and that he was especially taken with fellow-saxophonist Yusef Lateef’s use of ‘exotic-flavored’ music. Lateef, whose given name was William Evans, had converted to Islam in the late 1940s and by the mid-1950s was introducing Middle Eastern music into his jazz performances. Coltrane’s friendship with Lateef led him to the work of other jazz musicians influenced by Arabic music. Among them were quite a few converts to Islam.

A few years before the Coltrane Vanguard sessions Ahmed Abdul-Malik had played the oud on recordings by Johnny Griffin, another Coltrane friend and protégé. And the titles of Abdul-Malik’s own albums of the late 1950s, Jazz Sahara and East Meets West, expressed his interest in creating a synthesis of Middle Eastern and Western sounds.

Behind Abdul-Malik’s efforts towards an east-west musical synthesis is a remarkable story of personal transformation, a transformation somewhat obscured by the great musician’s own account of his life. Abdul-Malik told jazz colleagues and fans that his father had emigrated to the United States from the Sudan and settled in New York City. Hence his own Arabic name and his familiarity with Arabic and African instruments, and with the musical traditions of the Middle East and Africa.

But his true story was much more compelling, and it was fully told only after Abdul-Malik’s death at age 66 in 1993. As UCLA professor Robin D. G. Kelley revealed in his biography of Thelonious Monk, Abdul-Malik was born in Brooklyn to parents of Caribbean origin. His given name was Jonathan Tim Jr. A musical prodigy as a child, Tim was admitted to New York’s High School of Music and Art, where he joined the orchestra. And while in high school, Jonathan Tim supplemented his education in Western musical forms by studying with Arab musicians from Syria and Lebanon who had settled in Brooklyn. He also contacted African musicians residing in New York, and with them studied traditional African music – particularly the music of West Africa.

After high school Ahmed played with a number of distinguished bands, including those of Coleman Hawkins and Randy Weston. Encounters with jazz musicians who had drug and alcohol problems, and radically different encounters with musicians who had converted to Islam, led Jonathan Tim to the Ahmadiyya Islam movement. He took the name Ahmed Abdul-Malik upon his conversion. He was 19 years old.

As a sideman with jazz greats, including Thelonious Monk, Abdul-Malik distinguished himself as a disciplined and creative musician, while at the same expanding the repertoire and reach of their musical offerings.

Writing of Ahmed’s tenure with pianist Thelonious Monk, who was known as a demanding group leader, Professor Kelley noted that Abdul-Malik worked very hard to master Monk’s singular musical idiom. “(Ahmed) did not drink or smoke, showed up for work on time, was quiet and focused, and worked extremely hard. He had to learn the music on the bandstand . . . Within a couple of weeks, Abdul-Malik sounded as if he had been playing with Monk all his life.”

Another jazz bassist, George Joyner, converted to Islam in the mid-1950s, a few years after Abdul-Malik’s conversion. He took the name Jamil Nasser. Nasser’s comments on his own conversion to Islam sheds light on the parallel experiences of Ahmed Abdul-Malik and other converts of the period. In his autobiography (Upright Bass) Nasser noted that the music business “didn’t celebrate the jazz musicians who reclaimed their original identity and were no longer classified as ‘Negroes.’ Some Muslim jazz musicians retained their Christian names to sustain their careers. On the other hand, Yusef Lateef, Ahmad Jamal, Ahmed Abdul-Malik, Sadik Hakim, Rashid Ali, Idris Muhammad, Idrees Suleiman, and I legally changed our names and braved the consequences thereof.”

In the 50s and 60s Abdul-Malik played bass in bands led by jazz greats Earl Hines, Art Blakey, and most significantly with pianist Randy Weston, with whom he forged a close friendship. Weston, who lived in Morocco for long periods, was – along with Abdul-Malik – a prime mover in bringing African sounds into American jazz.

In the late 50s and early 60s Abdul-Malik recorded six albums for various labels. On each of them he featured both jazz musicians and masters of African and Middle Eastern music. His tours on behalf of the U.S. State Department – in which he joined other jazz greats – took Abdul-Malik to Lagos, Nigeria in 1961. There he performed with Randy Weston and met with local musicians. His 1962 album Sounds of Africa reflected these direct African influences.

Abdul-Malik’s albums of 1963 and 1964 did not sell well and soon his invitations to record were limited to studio sessions in which he backed other musicians. Realizing that the recording phase of his career was over Abdul-Malik turned to engagement in community affairs in his Brooklyn neighborhood of Bedford Stuyvesant. There he taught music to children and adults. But he was not forgotten by jazz fans, and in 1972 Abdul-Malik was invited to Morocco to participate in the first major African jazz festival.

He also furthered his own education, completing bachelors and master’s degrees at New York University, and soon after embarking on a course of study towards a Ph.D. New York University offered him the opportunity to teach classes on jazz improvisation, and he taught this course until he had a stroke in the 1980s.

Determined to pursue formal study of Arabic musical forms, despite his stroke, Ahmed became a student of the great oud player Simon Shaheen. Shaheen taught Ahmed the maqam system on which Arabic music is based, and said that his American student was making great progress – until he was incapacitated by a second stroke in 1993. That stroke, and Abdul-Malik’s long-standing diabetes, brought about his death in October 1993.

When ‘world music’ emerged as a musical category in the 1980s and 90s Abdul-Malik was recognized as a pioneer of the genre. And as recently as 2017 a European jazz group New Jazz Imagination, put out an album dedicated to Abdul-Malik’s musical legacy. Its title: “Ahmed.”