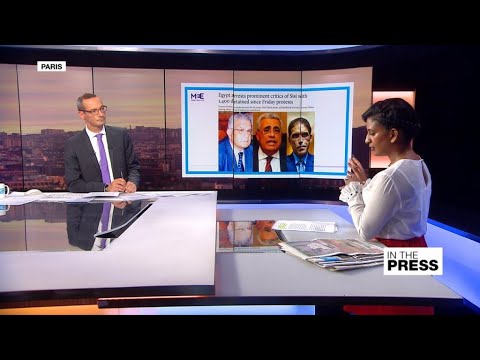 (Informed Comment) – The sheer brutality of Egypt’s Abdel Fatah al-Sisi’s military regime once again came to light, following another crackdown and mass arrests on protesters. Meanwhile, many Western leaders at the latest United Nations General Assembly (UNGA) in New York again show no sign of addressing such abuses from their ally.

Small but widespread protests recently erupted against corruption allegations lodged against Sisi, his wife and the military by Mohamed Ali, a former government contractor now exiled in Spain. Ali accused Sisi and his military of appropriating millions of dollars in public funds to build a colossal presidential palace and several luxurious villas. Following the protests, security forces arrested over 1900 protestors, while demonstration look set to continue.

Sisi’s Egypt has targeted web content and media platforms, with BBC News being blocked at times, and web services including communication apps, such as Wire. The regime wants to make it harder to communicate or access information.

With Ali having tapped into people’s deep frustrations, the protests are a response to the profound level of inequality across the country, while ordinary civilians fall deeper into poverty. The regime’s repression has clearly made it hard to protest this, which many seek to curtail too.

Such resentment towards this repression and inequality has brewed over several years of repression after the military, long acting as Egypt’s shadow government, launched a July 2013 coup against the democratically elected regime of Mohammad Morsi following the Egyptian revolution.

First the new Egyptian regime went for the Muslim Brotherhood, which was previously in power; then it sought to stamp out any form of democracy.

Over 60,000 political opponents are confined to Egypt’s prisons, hundreds of news outlets have been blocked, and the Committee to Protect Journalists (CPJ) reports Egypt is the third worst imprisoner of journalists worldwide. Targeting the Muslim Brotherhood, which was outlawed after the military coup, has allowed the regime to increase its power and surveillance over civil society, and effectively stamp out any opponent to the regime’s corruption – Brotherhood or not.

While given a peak opportunity to do so at the UNGA, Donald Trump and other Western leaders show continued indifference to Egypt’s abuses, even at times praising Sisi, despite widespread reporting of his government’s abuses.

Why is this the case? For Trump at least, he has bluntly shown he has favouritism towards ‘strongmen’ rulers, no matter how oppressive them may be. This was crudely reflected when he greeted Sisi with “my favourite dictator!” at a recent G7 summit.

Trump shrugged off New York protestors against Sisi at the UNGA, saying “Everybody has demonstrations. No, I`m not concerned with it. Egypt has a great leader. He`s highly respected.” Not only is Trump clearly aware of Egypt’s repression, he openly tolerates it.

Meanwhile, prominent European figures have accepted Sisi’s regime, with the British government for instance only offering watered-down criticism at most, whilst not following up with any action. French President Emmanuel Macron has been accused of supporting the Egyptian leader, whilst ignoring his human rights abuses.

Sisi has obvious appeal. After assuming power in 2014, he has promoted a counterterrorism narrative, designed to appeal to Western leaders. His ‘war against terrorism’ in the Sinai Peninsula however, also riddled with human rights violations, has created further radicalization according to analysts, as has his repression of the Brotherhood.

Yet the war-on-terror era has created a greater tolerance of human rights abuses and authoritarianism, if the pretext of counterterrorism is used. Trump particularly has worsened this, having shown he is sympathetic towards targeting and outlawing the Muslim Brotherhood, which gives such states more justification to carry out abuses.

Therefore, many European states, along with Washington, willing tolerate such blatant violations against civil society, due to Sisi falsely being viewed as a bulwark against terror.

Meanwhile, Western states continue to profit from the Egyptian regime and its counter-terrorism narrative.

The London-based organisation Campaign Against Arms Trade called the UK ‘complicit’ in the recent repression against protestors just for London’s own profit.

Egypt has long been the second largest military aid recipient of the United States, right after Washington’s close ally and neighbouring country Israel. Not only do these highlight obvious political interests of the USA, originally to protect Israel, but like Britain they also directly profit from weapons sales.

There are other material benefits. The oil company British Petroleum (BP), which is closely aligned with the UK government, signed a $12 billion contract for an oil and gas project with Egypt in March 2015, while Mohammad Morsi’s government actually put obstacles in the way of such investment. Under the Sisi regime, France and Egypt have also consolidated natural resource deals.

While there is more awareness about Egypt’s abuses particularly after Germany had criticised it after the protests, other Western political figures need to address their own governments’ complicity, and put human rights at the forefront of their foreign policy towards Cairo.

This can help bring about more positive reforms, show solidarity with people pushing for change, and empower those within the Egyptian government who could transform the system from the inside.