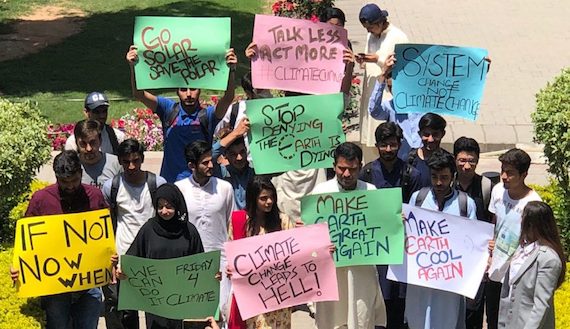 As students and climate activists get ready to march for the climate in Pakistan, Atika Rehman finds out why Pakistanis find it impossible to ignore climate change impacts any longer

Does the Pakistani public care about the climate crisis? The answer may be that it has no choice but to do so.

Across the country the effects of climate change and environmental degradation are hitting communities hard. A shortage of water is being deeply felt by both urban and farming populations. Just a few months ago, farmers from the town of Kharo Chan in Pakistan’s Sindh province marched on foot to Thatta — the old capital of the province located about 100 kilometres away — to protest decreasing levels of water in the Indus River. In the northern province of Khyber Pakhtunkhwa environmentalists based in its capital city, Peshawar, are sounding the alarm over rising levels of pollution brought on by smoke emitting industrial units and stone crushing plants operating in the city’s Hayatabad area. In Punjab, the bustling capital city of Lahore has seen dangerously high levels of smog, causing respiratory issues, allergies and headaches.

As these communities, across provinces, grapple with the multiple impacts of climate challenge, environmentally-conscious citizens have taken inspiration from global protests on climate change. They will be part of the global protests and will demand action from their government on Friday, September 20 — a day marked for a global climate strike in 120 countries.

The event in Pakistan is being referred to as a ‘climate march’ rather than a ‘strike’, as the latter is usually associated with unwanted city-wide shutdowns in the local vernacular. The organisers hope to keep the march “apolitical” – in the sense of not aligned to any existing political party – and are expecting the turnout across cities to be in the thousands.

The mass day of action is scheduled to take place just days ahead of the United Nations climate summit in New York. One of the lead organisers of this march in Pakistan, the environmental group ClimateActionPK, is calling on the Pakistani government to become part of a global collective to reduce carbon emissions. Their specific demands include: declaring a climate emergency, demanding climate justice through a global coalition, adopting a low-carbon economy and ensuring climate adaptation efforts at the grassroots.

The government seems willing to listen to some of these calls to action. According to one organiser, Sara Hayat, the government has facilitated the citizen-led initiative by granting permission for the march in various cities. In Lahore, the deputy city commissioner is helping to mobilise government school students and has pledged to join the walk. Hayat says that Zartaj Gul Wazir, the state minister for climate change, too, has agreed to come to the march in the capital of Islamabad, where the demands will be presented to her.

“People have protested in the past for the climate as well but those protests have been isolated,” says Abid Omar, who founded the Pakistan Air Quality Initiative that gathers data about air pollution and its impacts. “This time in Pakistan, it’s not the same old motley crew of individuals or NGOs. Citizens are now taking the lead.”

Enthusiasm for the march in Pakistan is high. Climate change activists and students are busy rallying supporters to join the initiative. Some are going into communities to invite people to join and to inform people about climate change. On university campuses like Bahauddin Zakariya University in Multan, students are putting out calls for a poster drawing activity. There are even pleas for crowdfunding aspects of the march, such as purchasing water drums and first aid kits. The march is taking place as temperatures in parts of the country remain close to 40 degrees Celsius.

Omar said, “In Lahore, air pollution has reached a tipping point and there is a conversation about it. But in Karachi, despite the high levels of carbon monoxide in the air, it is not really a discussion. I’m marching for action.”

Alina Salahuddin, a student who just graduated from one of Karachi’s most prestigious high schools, said the sense of eagerness within the student body is encouraging. “I manage a climate forum on social platforms and am seeing a lot of curiosity about the upcoming event. A lot of questions are coming to us from young people in Hyderabad and Thatta. High school students outside Karachi want to know if there is a march in their city.”

She added that students are realising that they have to march for their future. “Even those who shy away from political discussions want to make their voices heard on the issue of the environment. It leaves no one untouched. We will all face the same consequences.”

Salahuddin, who said she admires Swedish student activist Greta Thunberg’s perseverance, notes that things are slowly changing on campuses. “One private school has started a zero waste initiative. They don’t waste paper and have stopped selling plastic bottles at the canteen. Where one would see more students flocking to the sports club or debating society, we are seeing the environmental societies grow in membership.”

While preparations for the climate march in Pakistan are an encouraging indicator of awareness levels, but is the government listening?

Will the government listen?

Environmental lawyer Abdul Rafay Alam said, “I don’t think policymakers in Pakistan have understood the gravity of the climate crisis. Our current Nationally Determined Contribution to greenhouse gas reduction is in fact a trajectory to increase emissions by 400% by 2030. This is remarkably irresponsible when we know just how vulnerable Pakistan is to climate challenges. ‘Business-as-usual’ models are now showing a possible global temperature increase of 4 degree Centigrade by the end of this century. There will be little or no agriculture in Pakistan by then.”

“If there are conversations raising concerns about the climate crisis, they’re drowned out by claims that Pakistan doesn’t owe the international community anything. These claims are premised on the notion that the responsibility to deal with the climate crisis is the developed world’s alone. Nothing could be further from the truth. The climate crisis is real, and it’s everyone’s problem.”

Pakistan’s federal minister for climate change, Malik Amin Aslam, who is also a key advisor to Prime Minister Imran Khan on the subject, said his government is making a strong political commitment to tackling climate change. He said that while he will be unable to march on Friday, he welcomes the initiative. “I would have loved to be a part of it but can’t as I will be leaving for the UNSG climate summit. This positive civil society activism bolsters our cause, which is to make Pakistan ready to face climate change and contribute to the global effort towards fighting this challenge.”