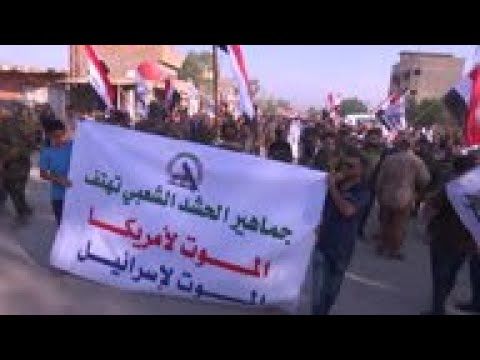 (Niqash) – Mustafa Habib Often trapped between Iran and the US, Iraq’s foreign policy experts have been playing a wily game to avoid it happening again – especially after suspected Israeli attacks inside the country. 6.09.2019 | Baghdad Politics
Unusual: Iraqi leaders came together to formulate a measured response.

In Iraq, both politicians, military and the general public have recently been preoccupied by a series of mysterious explosions at weapons storage facilities belonging to the country’s semi-official militias. Iraqis pondered what was causing the explosions: was it the high summer temperatures causing the weaponry to ignite? Or perhaps poorly maintained facilities? And of course, some wondered if the sites were being attacked. However, a recent incident on the Iraqi-Syrian border raised different and more pressing questions about the various explosions.

A leader in the semi-official militias appears to have been targeted by a drone in the area of Qaim on the border of the two countries. In late August, Kazem Ali Mohsen, a senior member of Hezbollah in Iraq, was killed there in a drone attack.

After keeping quiet about the explosions at the weapons storage facilities for weeks, members of the militias declared that it was Israel that had been targeting them. The story only got bigger when reports in the Israeli media seemed to confirm this, noting that it was part of a plan to destroy any militias close to Iran. Hezbollah is one of these.

Iraq has been doing its best to maintain some kind of neutrality, caught as it is between its immediate and very influential neighbour, Iran, and its powerful ally, the US. Iraq did not want to be pushed into a war and wanted to remain neutral, the country’s national security adviser, Falih al-Fayadh, told the New York Times afterwards.

On social media, the tensions were often discussed like this: “Why do these people want to push us towards a new war, when what we really need is development and jobs?”

But the seriousness of the situation did not escape the Iraqi government and a series of high-level meetings were called.

Iraqi president Barham Saleh called for two meetings. The first featured the president, the prime minister and the speaker of the Iraqi parliament as well as leaders of the various militias. The second was for political party leaders. After the two meetings, the Iraqi government issued a statement disavowing any extreme statements about the situation. Only the government should be formulating an appropriate response, the statement said. This was in response to some of the threats and radical statements being made by militias. The government also said it would complain about the incident at the United Nations’ Security Council.

Hours after Abu Mahdi al-Mohandes – he is the second in command of the semi-official militias – issued his own statement, threatening to target US forces in Iraq, his words were contradicted by Falih al-Fayadh, also the chairman of the militias.

Al-Fayad rejected al-Mohandes’ threats and stressed that the Shiite Muslim militias have long been divided between those groups loyal to Iran and those with more of an allegiance to the Iraqi government.

“This mysterious bombing of the militias isn’t acceptable,” a senior member of the militias allied with cleric Muqtada al-Sadr (who is more loyal to the Iraqi government) told NIQASH under condition of anonymity because of the topic’s sensitivity. “That’s even though these attacks have targeted the militias closer to Iran rather than others. We still demand investigations and we want to know the reason for these attacks. We also want to know if the bombed storage facilities were holding Iranian weapons. And if so, then what were they doing here in Iraq?” he said.

Rumour had it that Iranian weapons were being stored in Iraq in anticipation of any possible aggression against Iran. No officials would confirm or deny this leak – although Ammar al-Hakim, the cleric who leads one of Iraq’s biggest Shiite Muslim political parties, did tell a large audience in Baghdad that, “the country of Iraq is not a storehouse for non-Iraqi weapons”.

Possibly most significant was the public reaction as various factions and militias close to Iran tried to escalate tensions, calling for public demonstrations against US and Israeli interference; these groups also postered the streets with slogans saying things like “no, no, no to America” and “death to Israel”. Many of the supporters of these slogans were very surprised to find a distinct lack of public interest in their machinations.

On social media, the tensions were often discussed like this: “Why do these people want to push us towards a new war, when what we really need is development and jobs?”

And the country’s most senior Shiite Muslim religious leader, Alli al-Sistani, simply ignored what was being said about the attacks. This served to isolate pro-Iranian factions further.

At the same time though, Israel and the US didn’t escape unscathed. Earlier in August, after the first bombings of weapons depots, the Iraqi government said it would be cancelling permissions for foreign aircraft in Iraqi airspace unless they had prior approval. This can be seen as warning to The US because basically they are the ones that really control Iraqi airspace. In effect, this makes the US responsible for any aerial attacks.

“Restricting the powers of the coalition [the international coalition in Iraq fighting the extremist Islamic State group] makes our mission more difficult,” an officer from one of the member states involved in the coalition told Niqash anonymously – he is not authorized to make statements to the media. “But it is also true that the coalition should bear responsibility for any air attack in Iraq,” he conceded.

Iraq doesn’t have the technological capacity to control its own airspace and since 2014, when the extremist Islamic State group managed to take control of one-third of the county, the US have been in charge in this realm, via the international coalition. The recent attacks – whether they were carried out by Israel or any other state or group – saw the US forces accused of both failure and of facilitating the attacks.

It’s clear that as much as Iraq needs the US, if political sentiment were to turn firmly against the Americans, there is recurring talk that their troops might be expelled from the country as a result. This would, in turn, allow Iran to increase its influence in the country, something the US – and indeed many Iraqis too – do not want.