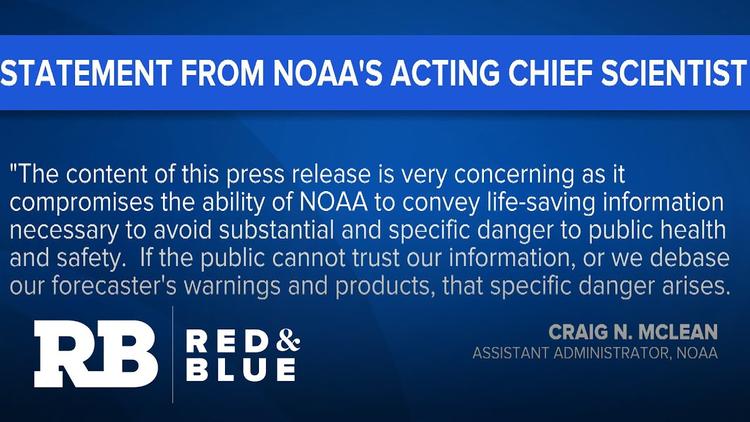 Ann Arbor (Informed Comment) – Last week Trump erroneously tweeted out that Alabama was in the path of Hurricane Dorian, which could have set off a panic in Alabama that led to people leaving their homes unnecessarily, and to economic harm. The Birmingham National Weather Service contradicted the president. It now transpires that Wilbur Ross, who is not only Commerce secretary but also oversees the National Oceanic and Atmospheric Administration, warned the scientists at NOAA not to contradict Trump. Then on Friday, NOAA put out a statement defending Trump’s original (mis)statement. The scientific establishment in the United States was shocked and deeply alarmed. NOAA’s own chief scientist sent an email warning about the undermining of the agency’s credibility, which CBS News acquired.

This incident reminded me of something. The Egyptian military medics announced breathlessly in 2014 that they had found a cure for AIDS and for hepatitis C. . The medic who made the announcement got mixed up between RNA and DNA. Comedian Bassem Youssef, now in exile, wrote that if an ordinary student in a medical school had made such an error, he would have been drummed out of the school and a policy would have been adopted not ever to accept an applicant from his village ever again.

You see, not only has the Egyptian military’s medical wing cured AIDS, but it is not allowed for anyone in Egypt to question this ridiculous claim on pain of losing life, limb and liberty.

The Egyptian army owns an increasing share of the country’s economy, and its military junta, led by Field Marshal Abdel Fattah al-Sisi, tightly controls all politics, press, television and public discourse in the country, labeling critics “terrorists” or accusing them of defaming the Egyptian nation. The elections for president and parliament are so phony as to be sick jokes. In the last presidential election al-Sisi imprisoned one man who might have run against him and his only remaining “rival” kept saying he was an al-Sisi supporter and would vote for the incumbent. You can’t make this stuff up. Egypt isn’t quite North Korea, but it increasingly is not so far away from it.

Back in the early 1990s, a delegation of a few Iraqi academics visited the United States. They came to the University of Michigan, and I was asked to meet with them. The leader of the delegation was a historian, and he and I had lunch. He asked if anyone else at my university wrote about Iraq. I said I did not think so. I asked him about the state of historiography in Saddam Hussein’s Iraq. He was apologetic. He said that some individuals were doing good work. He himself had spent time in lots of world archives and had found important documents for Gulf history in the Maharashtra state archives in India. (Not all documents were sent back from British India to the London India Office in 1947 when India became independent, or necessarily were copied there). I told him about my own discoveries of Iraq-related documents in Lucknow for the eighteenth and nineteenth centuries.

He opened up to me after a while. He admitted that the annual Iraqi historical association meeting was often a bit of a fiasco. I asked why. He said that Saddam Hussein fancied himself a historian, and sometimes attended. All the historians were afraid of saying something that might offend him or contradict his vision of Iraqi history, which might lead to arrest or imprisonment. So the papers were to say the least bland. I don’t know of any great Iraqi history written under Saddam, although back in the 1950s and 1960s Iraqis produced innovative and important writing in the field.

Or take Libya under military dictator Muammar Gaddafi. I visited the Libyan National Library in Benghazi. One of the administrators there lamented that there had been few acquisitions in recent decades (it only has 150,000 volumes; the Ann Arbor Public library has 490,000 books, cds and other materials and it is in a small town). The staffer said that around 1980 Gaddafi appointed one of his generals to direct the national library. The general wasn’t interested in buying new books for it. She said, “He said the only book Libyans need is Col. Gaddafi’s Green Book.”

The Trump regime exemplifies the quote from Orwell’s 1984, “The party told you to reject the evidence of your eyes and ears. It was their final, most essential command.” It is the same principle by which tinpot dictators such as al-Sisi govern Egypt.

Trump is turning the United States into a third world country. Or worse. Actually, some third world military dictatorships, such as that of Thailand, deeply respected science and technology and boosted funding for them.