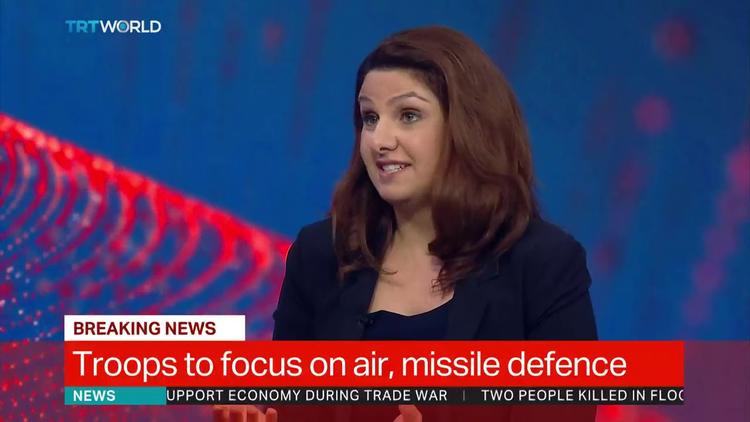 (Foreign Policy in Focus) – For all their overwhelming firepower, the U.S. and its allies can cause a lot of misery in the Middle East, but still can’t govern the course of events.

In many ways it doesn’t really matter who — Houthis in Yemen? Iranians? Shiites in Iraq? — launched those missiles and drones at Saudi Arabia. Whoever did it changed the rules of the game, and not just in the Middle East. “It’s a moment when offense laps defense, when the strong have reason to fear the weak,” observes military historian Jack Radey.

In spite of a $68 billion a year defense budget — the third highest spending of any country in the world — with a world-class air force and supposed state-of-the-art anti-aircraft system, a handful of bargain basement drones and cruise missiles slipped through the Saudi radar and devastated Riyadh’s oil economy. All those $18 million fighter planes and $3 million a pop Patriot anti-aircraft missiles suddenly look pretty irrelevant.

This is hardly an historical first. British dragoons at Concord were better trained and armed than a bunch of Massachusetts farmers, but the former were 5,000 miles from home and there were lots more of the latter, and so the English got whipped. The French army in Vietnam was far superior in firepower than the Viet Minh, but that didn’t count for much in the jungles of Southeast Asia. And the U.S. was vastly more powerful than the insurgents in Afghanistan and Iraq, but we still lost both wars.

The September 14 attack on Saudi Arabia’s Aramco refineries at Abqaiq and Khurais did more than knock out 50 percent of Saudi Arabia’s oil production — it shook the pillars of Washington’s foreign policy in the region and demonstrated the fragility of the world’s energy supply.

The End of the Carter Doctrine?

Since 1945, Washington’s policy in the Middle East has been to control the world’s major energy supplies by politically and militarily dominating the Persian Gulf, which represents about 15 percent of the globe’s resources. The 1979 Carter Doctrine explicitly stated that the U.S. reserved the right to use military force in the case of any threat to the region’s oil and gas.

To that end, Washington has spread a network of bases throughout the area and keeps one of its major naval fleets, the Fifth, headquartered in the Gulf. It has armed its allies and fought several wars to ensure its primacy in the region.

And all that just got knocked into a cocked hat.

Washington blames Iran, but the evidence for that is dodgy. The Americans have yet to produce a radar map showing where the missiles originated, and even the Trump administration and the Saudis have scaled back blaming Tehran directly, instead saying the Iranians “sponsored” the attack.

Part of that is plain old-fashioned colonial thought patterns: the “primitive” Houthis couldn’t pull this off. In fact, the Houthis have been improving their drone and missile targeting for several years and have demonstrated considerable skill with the emerging technology.

The U.S. — and, for that matter, the Saudis — have enormous firepower, but the possible consequences of such a response are simply too costly. If 18 drones and seven cruise missiles did this much damage, how much could hundreds do? World oil prices have already jumped 20 percent. How high would they go if there were more successful attacks?

The only way to take out all the missiles and drones would be a ground attack and occupation. And who is going to do that?

The United Arab Emirates (UAE) has already begun withdrawing its troops from Yemen and has been holding talks with the Houthis since July (which is likely why UAE oil facilities were not attacked this time around). The Saudi army is designed for keeping internal order, especially among Shiites in its Eastern provinces and Bahrain. The princes in Riyadh are far too paranoid about the possibility of a coup to build a regular army.

Would the U.S.? Going into an election with prices already rising at the pump? The U.S. military wants nothing to do with another war in the Middle East, not, mind you, because they have suddenly become sensible, but as Gen. Joseph F. Dunford Jr., chair of the Joints Chiefs of Staff put it, it drains resources from confronting China.

Starting with the administration of George W. Bush, and accelerated during the Obama presidency’s “Asia Pivot,” the U.S. military has been preparing for a confrontation with China in the South and/or East China Sea. The Pentagon also has plans to face off Russia in the Baltic.

One suspects that the generals made it clear that, while they can blow up a lot of Iranians, a shooting war would not be cost free. U.S. Patriot missiles can’t defend our allies’ oil fields (or American bases in the region), and while the anti-missile capabilities on some U.S. naval ships are pretty good, not on all of them are armed with effective systems like the Sea Sparrow. Americans would be coming home in boxes just as the fall election campaign kicked into high gear.

Whether the military got that message through to the Oval Office is not clear, but Trump’s dialing down of his rhetoric over Iran suggests it may have.

Making Good on a Stalemate

What happens now? The White House has clearly ruled out a military response in the short run.

Trump’s speech at the UN focused on attacking globalism and international cooperation, not Iran. But the standoff is likely to continue unless the Americans are willing to relax some of their “maximum pressure” sanctions as a prelude to a diplomatic solution.

The U.S. is certainly not withdrawing from the Middle East. In spite of the fact that shale oil has turned the United States into the world’s largest oil producer, we still import around one million barrels per day from Saudi Arabia. Europe is much more dependent on Gulf oil, as are the Chinese and Indians. The U.S. is not about to walk away from its 70 plus year grip on the region.

But the chessboard is not the same as it was six months ago. The Americans may have overwhelming military force in the Middle East, but using it might tank world oil prices and send the West — as well as India and China — into a major recession.

Israel is still the dominant local power, but if it picks a fight with Iran or Hezbollah, those drones and cruises will be headed its way. Israel relies on its “Iron Dome” anti-missile system, but while Iron Dome may do a pretty good job against the primitive missiles used by Hamas, mobile cruises and drones are another matter. While Israel could inflict enormous damage on any of its foes, the price tag could be considerably higher than in the past.

Stalemates can be dangerous because there is an incentive to try and break them by introducing some game changing weapon system. But stalemates also create the possibility for diplomatic solutions. That is certainly the case now.

If a more centrist government emerges from this last round of Israeli elections, Israel may step back from Prime Minister Benjamin Netanyahu’s relentless campaign against Teheran. And Trump likes “deals,” even though he is not very good at them.

“This is the new strategic balance,” says Newclick Editor-In-Chief Prabir Purkayastha in the Asia Times, “and the sooner the U.S. and its NATO partners accept it, the quicker we will look for peace in the region.”