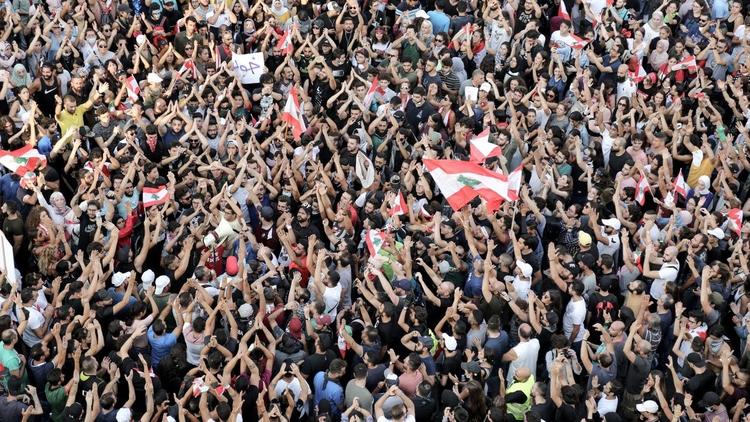 This month Iraq and Lebanon have anti-government protests in common. Partially that’s due to the ineffective and deeply corrupt quota system their governments also share. There’s no easy way out of this trap.

Thousands of locals in Lebanon have been protesting since Thursday against what they say is a corrupt government. On Friday, those demonstrations – sparked by proposed taxes at a time of rising living costs – devolved into some violent clashes. Currently the Lebanese leadership is trying to resolve the issue.

The recent protests in Iraq and the current demonstrations in Lebanon have something unique in common. Both countries’ political systems have what may best be described as an unofficial quota system that dictates the way their democracy works and how politicians, and even bureaucrats, take power.

It’s a system that survives by emphasising sectarian or ethnic fidelities over national identity and forcing the construction of complicated allegiances in administrations. In Iraq, the unofficial quota system splits power between three main voter groups in the country: Sunni and Shiite Muslims and the Kurdish. In Lebanon, the power is distributed between the Sunni and Shiite Muslims and the country’s Christians.

Neighbours begin to realise that they have unemployment, poor state services and corrupt politicians in common. In that unity, comes the realization that they have been fooled by a divisive political game.

Basically, it means that, for example, Shiite Muslims usually vote for Shiite Muslims, Sunni Muslims vote for Sunni Muslims and Christians for Christians – and so forth, and so on. Although both countries are supposedly democratic, the unofficial quota system works in opposition to true democracy. It also leads political parties to conduct themselves, and to run campaigns, in a polarizing way, one that necessarily excludes voters who are not part of their ethnic or religious group.

Iraq’s unofficial sectarian quota system was established after the 2003 US-led invasion of Iraq that toppled Saddam Hussein’s regime. In order to avoid sectarian infighting among politicians, US administrators thought it best to split the most important positions in Iraq’s new parliament between the three major ethnic and sectarian groups in the country. Over time though, many analysts believe this practice has come to hamper Iraqi democracy, with leaders being picked for their sect or ethnicity, rather than on merit.

And the system is far more problematic than that. In reality, it also follows two further principles: How much power each appointment gives to the person who gets the job, and therefore how much money the appointment can generate. This results in a small group of individuals from each demographic group monopolising wealth and privilege.

In Lebanon, the 15-year civil war created a similar sort of problem, with intense enmity between different groups in the country. When the war finally ended, that country’s unofficial sectarian quota system was established for similar reasons: To make all of the country’s groups feel as though they had a part in new power structures.

In Iraq, the quota system was just supposed to be temporary, a way of keeping the peace until true democracy took root. Instead, the quota system flourished and as it did, so did cronyism and corruption, and the system became more permanent. After all, nobody wanted to give up what they had gained.

Thanks to the quota system, there’s no chance for good governance or merit-based administration at all, despite the trappings of democracy.

Today in Iraq, election campaigns run by Shiite Muslim parties have often relied on fear of “the other” – Sunni Muslims in Iraq – with politicians claiming that because the dictator Saddam Hussein was Sunni, all Iraqis who share his sect want the return of an authoritarian regime that puts them in charge. Meanwhile Sunni Muslim parties sew fear by claiming that Iraq’s Shiite Muslims only want to increase Iran’s influence over the country.

Whenever the sectarian rabble rousing abates, and there is no new crisis to distract a country’s citizens from their living conditions, neighbours begin to realise that the Sunni or Christian or Shiite family across the road can’t afford bread either – and that they have unemployment, poor state services and corrupt politicians in common. In that unity, comes the realization that they have been fooled by a divisive political game.

In Iraq, that realization recently came during fighting against the extremist group known as the Islamic State: As Iraqi troops entered the city of Mosul, there were both Sunni Muslims and Shiite Muslims fighting side by side against a common enemy. And during recent anti-government protests in Iraq, sectarian loyalties did not come into the play. In southern Iraqi cities like Basra, Shiite Muslim protesters – leaderless, angry, mostly young men – attacked the offices of Shiite Muslim political parties.

After the recent protests in Iraq and this week’s in Lebanon, political parties in both countries pledged their support for citizens and promised to address their demands.

But one can also assume that the politicians, and often their constituents too, are only too well aware that the existing political system, with its unofficial quotas, refuses any easy fix. It would be almost impossible to bend it to serve those promises. Because the quota system is based on distributing senior positions and powerful jobs to loyalists. It’s not based on good governance or merit; putting technocrats and appropriately skilled administrators into positions of power – rather than loyalists – threatens that quota system, and those who have gained from it.

In the kingdoms of the Middle East region, the royal families may not be particularly competent rulers but, given their dictatorial power and cash, they can appoint as many technocrats, experts and international companies as they want to improve the lives of their citizenry. This legitimizes what is basically undemocratic rule. However in countries like Iraq and Lebanon, bound to this unofficial quota system, there’s no chance for good governance or merit-based administration at all – despite both nations having the trappings of democracy.

To a certain extent, Iraq and Lebanon do enjoy some of the aspects of a genuine democracy as well as much freedom of opinion, especially when compared to other Arab countries. However they both remain fragile systems because the sectarian quota system nourishes itself by creating hostility between different groups of voters. One might imagine that sooner or later such a system would devolve, as the circumstances that forced its creation disappear, and as it becomes increasingly clear that such a system cannot be used to properly run a country, nor to distribute a nation’s wealth equitably.

In both Iraq and Lebanon, people are still angry. The protests will go on. But there is also a much more important question to consider: How can this poisonous quota system be changed? Especially when technocrats and protestors have only their good intentions to combat the will of political parties in power, who have both guns and foreign support.