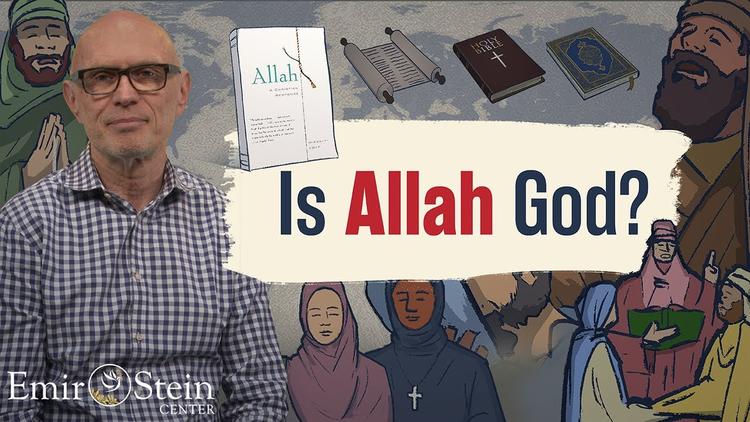 “Is Allah God? If the answer to this question were simple, Professor Miroslav Volf would not have written a whole book on the subject. Still, in this engaging short video, Professor Volf provides a brief summary of the answer.

Professor Volf is the Henry B. Wright Professor of Systematic Theology at Yale Divinity School. He is also the Founding Director of the Yale Center for Faith & Culture. In his book, Allah: A Christian Response (2011), Professor Volf explores every side of this important question and whether Muslims and Christians have a common God.”

Miroslav Volf knows how difficult reconciliation can be. His books speak of Religious commitment that promotes peace, not violence. A feature story exploring new ways to think about worship and living as Christians in a violent world.

On September 11, 2001, Yale theology prof Miroslav Volf addressed an annual international prayer breakfast at the United Nations. His theme was reconciliation, particularly how the heart of Christian tradition offers ways to promote peace in the world.

“I pray that God will grant you wisdom to find creative ways to practice embrace in our world shot through with violence,” he concluded—unaware that just blocks away, the Twin Towers had imploded.

You might dismiss Miroslav Volf as an ivory tower theologian who doesn’t understand the relationship between religion and violence. In fact, he often says, he writes to make sense of his own experiences with war, injustice, and suffering.

Volf is convinced that the way to cure religiously induced and rationalized violence isn’t to minimize religious commitment. The cure is for Christians to reclaim the faith’s original content—grace, forgiveness, reconciliation, justice—and live as agents of peace.

Volf grew up in the former Yugoslavia. His dad was tortured in a concentration camp and became a pacifist preacher in the Holiness Pentecostal tradition. Identifying themselves as forgiven children of God made the Volfs seem alien among most neighbors, who saw themselves as communist or Croatian Catholic or Bosnian Muslim or Serbian Orthodox.

Miroslav Volf was a baby when a soldier playfully put his older brother, Daniel Volf, on a horse-drawn bread wagon. The five-year-old leaned sideways…and his head was crushed between a gate post and the wagon.

Miroslav recalls feeling humiliated when communist teachers asked about his dad’s occupation. In college, communists in one town beat up Volf and others for playing in a Christian band. His masters degree from Fuller Theological Seminary in California made him suspect when Volf was conscripted into Yugoslavian military service.

“My room was bugged. For three months, all my conversations were recorded. Then for another three or four months, I was interrogated and threatened that I would be sent to prison for eight years because I had said this or that against our great communist country,” he says.

When ethnic and religious tensions exploded into war, Volf was teaching at Evangelical Theological Seminary in his Croatian hometown, Osijek. The entire seminary had to go into exile. Powerless, they watched as TV broadcasts showed their homes being destroyed.

Volf wrote Exclusion and Embrace: A Theological Exploration of Identity, Otherness, and Reconciliation after lecturing in Germany at a conference about Christianity and social upheaval.

“It was the winter of 1993. For months now the notorious Serbian fighters calledcetnik had been sowing desolation in my native country, herding people into concentration camps, raping women, burning down churches, and destroying cities. I had just argued that we ought to embrace our enemies as God has embraced us in Christ,” Volf writes in the preface to Exclusion and Embrace.

After the lecture, Jürgen Moltmann, who had supervised Volf’s dissertation, asked, “But can you embrace a cetnik?”

Volf was taken aback. Where could he find the strength to embrace someone who, to a Croat (or Bosnian Muslim) was the ultimate evil “other”? He writes that he wanted to answer, “No, I cannot—but as a follower of Christ I think I should be able to.”

His book explains that the ultimate goal of human life is a community of love in the embrace of the Triune God. Just as Father, Son, and Holy Spirit have distinct identities yet live in unity, people who become new creations in Christ retain their identities—and make space for others.

Too often, though, in “keeping the faith pure,” religious bodies exclude people. Jesus condemned Pharisees who falsely named certain behaviors “sinful” or “unclean” so they could dominate and exclude “in the name of God whose love knows no boundaries.”

Volf says genuine Christian reflection on social issues starts with Christ’s death, which he explains as the narrative of the love of the divine Trinity turned toward a sinful world. This love embraces justice for the oppressed and the Crucified’s gift of forgiveness to perpetrators.

He admits it’s often hard for him to reach out to Serbs, just as a Serb friend grieves over crimes committed against her people. Volf says that no matter what someone has done to you, you must be willing to begin the process of making your enemy your friend.

Practicing what he calls “double vision” lets you see a situation through your eyes…and through your enemy’s eyes. For true reconciliation, though, you’ll have to name the way your enemy injured you, your enemy must acknowledge that injury—and then you agree not to count it against him or her.

Volf says that victims may need to repent of not following Christ’s command to love and pray for their persecutors. Else they may themselves become perpetrators.

Forgiving as God does

In Free of Charge: Giving and Forgiving in a Culture Stripped of Grace, Volf explains, “Just as the Three are the One because they mutually indwell each other, so we are one with the Divine One because Christ lives in us and through us.”

But while “the Three reciprocally give and receive as equals, we only receive from God; we are given our very being, are freed from sin, and will be glorified.” Faith, gratitude, availability, and participation are ways of loving God—not gifts to God. We can, however, give to others because “enabled by the Spirit, we have embraced the gift-giving Christ.”

Christ came not just to reconcile individuals with God but also to break down barriers, work through our different gifts, and build us into one body, the church. Our giving the gift of forgiveness is excruciatingly difficult yet essential for us to live humanly in this world.

When young Daniel Volf died, his parents chose not to press charges. The soldier felt so guilty that he was hospitalized. “My father, with a wound in his heart that would never quite heal, went to visit him, to comfort the one whose carelessness had caused him so much grief, and tell him that my mother and he forgave him,” Volf writes. After the soldier’s discharge, Dragutin Volf traveled two days to talk with him about God’s love and forgiveness.

Decades later, Miroslav Volf learned another part of the tragedy. Daniel wandered down to the soldiers because the nanny—a saintly Christian woman whom Miroslav adored till her death—hadn’t kept close tabs on Daniel. By not blaming her in front of their remaining two children, the Volfs didn’t taint their youngsters’ love for “Aunt Milica.”

It’s hard to forgive someone who’s unintentionally wounded you. It’s even harder when hate fueled the wrong. Volf tells of Ivo Markovic, a Francisan monk from Bosnia. Bosnian Muslims massacred 21 men from Šusanj, his home village. Nine of those men, all feeble seniors, were his relatives.

Three years later, Father Markovic visited Šusanj. A fierce rifle-toting Muslim woman had commandeered his brother’s house. “Go away, or I’ll shoot,” she warned. Gently but firmly, the monk replied, “No, you won’t shoot me. You’ll make a cup of coffee for me.”

Volf writes, “And they, deadly enemies, began to talk as they partook in the ancient ritual of hospitality: drinking coffee together. She told him of her loneliness, of the home she had lost, of the son who never returned from the battlefield…. He, the victim, came to her asking for her hospitality in his brother’s home, which she unrightly possessed.”

Father Markovic showed willingness to begin the process of embracing the enemy. Whether the two would ever navigate “the difficult terrain of forgiveness,” Volf took hope in the monk’s ability to step out of himself and attend to the needs of “the other.”

He says expecting too much too soon gets in the way of what’s possible. Even small steps toward reconciliation make a difference, especially in relations between nations.

“We welcome grant applications that apply these ideas to worship and congregational life,” says Betty Grit, who manages the Worship Renewal Grants Program at the Calvin Institute of Christian Worship.

Watch this 3-minute clip of Miroslav Volf on how his parents forgave those responsible for their son Daniel’s death.

Volf’s 9/11 address on Christianity’s peace promoting potential is further developed in extensive Religion & Ethics and Speaking of Faith interviews. His essay “Christianity and Violence” notes that the media would rather cover violence by religious adherents than peacemaking by faithful people such as Katarina Kruhonja, a Croatian Catholic doctor who won an Alternative Nobel Peace Prize.

Hear Volf speak on giving and forgiving at The January Series, January 18, 2007, at Calvin College in Grand Rapids, Michigan. His earlier Calvin speeches on truth, memory, and healing are archived here.

Volf urges Christians to become “a counterculture for the common good,” which includes learning from other faiths and rethinking criminal justice and incarceration.

Download free discussion guides on praying for mercy and justice or starting interfaith dialogue. Get tips on including confession in worship and preaching forgiveness.

Watch and discuss a Mennonite Central Committee DVD about Africans who decided to make peace across tribal and religious lines. MCC peacemaking in Nigeria includes diffusing Christian-Muslim violence in Jos after published cartoons of Muhammed, the Islamic prophet, inflamed tempers.

Browse related stories about dialogue across denominations, hope for a new heaven and earth, Laotian churches, peace and justice in worship, and prison congregations.

Talk about reconciliation and justice.

What is the best way you’ve found to address and talk about reconciliation and justice?

Via Calvin Institute of Christian Worship