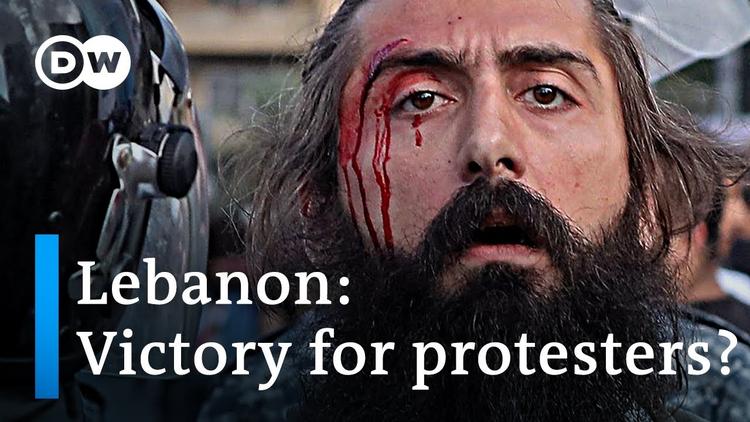 Montreal (Informed Comment) – Lebanese Prime Minister Saad Hariri has announced his resignation1 in a letter to President Michel Aoun. In a public address, the now former premier has explained his actions as necessary to the protection of the state and the revival of the Lebanese economy. Hariri has also called on his fellow ministers to resign, echoing the words of his late father, former prime minister Rafik Hariri: “no one is bigger than his country”.

The Lebanese people are insisting on this principle given that Hariri’s resignation followed two weeks of nationwide protests2 and, in some cases, riots3.

But why did Hariri resign now and not October 17th, when hundreds of thousands of demonstrators began filling the streets?

The answer is that he was caught between an uncompromising political class and immovable protester demands.

The massive unrest was brought on by widespread corruption4 among politicians, a public debt of 151% of GDP5, and the tipping point, a proposed tax6 on free communication platforms such as WhatsApp. Said protests have also united Lebanese citizens of various religious and ethnic backgrounds in taking to the streets and bringing with them calls for the complete dissolution of the government.

Hariri was desperately trying to meet some of the protester demands, even while he continued to make appeals7 for foreign investment. Both tasks were somewhat undermined by his frivolous playboy image, as he was further tarnished in the eyes of Lebanon’s struggling masses by the revelation that he had paid a South African supermodel8 $16 million.

His efforts at reform came in the form of proposals9 to slash the numbers of Lebanon’s bloated administrative class, cut down minster salaries by 50%, increase taxes on financial institutions, and distribute $160 million in housing loans. On paper, these steps seemed fair enough, but unsurprisingly they met heavy resistance from several politicians in power, who by large are considered hopelessly corrupt by everyday Lebanese.

These politicians include the ministers of the Free Patriotic Movement, under the leadership of the President Aoun’s son-in-law: Foreign Minister Gibran Basil.

Responsible for the foreign ministry, but looking to consolidate his power internally, Basil has long been accused of10corruption and of operating under the control of pro-Iranian group Hezbollah. Moreover, the ministry of energy, under the FPM portfolio, is said to be heavily corrupt and inefficient11; leaving Lebanon with daily blackouts that fueled protester grievances. However, despite calls for Basil’s resignation and disbarment from any future governmental office, the Foreign Minister refuses to budge12 refuses to give an inch despite his deep unpopularity. “Gibran Basil, f*** his mother”13 has become a signature chant of the huge street crowds.

Regardless, Basil’s stance on the matter is supported by the leader of Hizbullah14, Hassan Nasrallah, who is also facing protester calls to withdraw his members from parliament. This is due to claims that his party, an accused Iranian proxy15, has contributed to the deterioration of the Lebanese economy. The group is blamed not only for corruption but also for having provoked the disastrous 2006 war with Israel16, which led to the deaths of over a thousand Lebanese civilians and billions of dollars in infrastructure damage. Moreover, the party’s continuous involvement in Syria17 on the side of President Bashar Al Assad is viewed by some Lebanese as detrimental to Lebanese and Pan-Arab interests.

It does not help that Hizbullah’s supporters have also been responsible for a series of violent attacks against protestors18, which have led to several injuries and public condemnation.

But Hizbullah enthusiasts are not the only ones to blame for the assaults, as supporters of the middle class, Shiite Amal party have also been involved in attacks on their fellow countrymen. This is due to protestors demanding the resignation of Amal leader Nabih Berri and his ministers19 from parliament. Berri, Lebanon’s only House Speaker since 1992, has long been suspected of corruption and financial mismanagement of the Finance Ministry, responsible for the regulation of Lebanon’s many banks. The same banks20 stand accused of embezzling money for politicians, financing Hezbollah activities, and holding most of Lebanese public debt; not the best combination for a financial institution.

Berri has shown the same flexibility as his fellow high politicians, which is to say, none. In a press release, he stated that a new government “would complicate the situation further”21 and that only the current government, conveniently including himself, can hope to resolve the situation.

Naturally, with the Lebanese masses pushing for a complete overhaul of government and with elite incumbents stubbornly sticking their ground, Hariri had little hope of success. Hence his resignation and his call for the current government to dissolve.

Whether or not his fellow cabinet members and parliamentarians, including those mentioned so far, follow suite remains to be seen. The Lebanese people will not be satisfied with his departure alone. They continue to chant, as they have for weeks: “Kellon Yaane Kellon”22:

“All of them” means all of them.

Georges Habib is a freelance journalist based in Montreal.