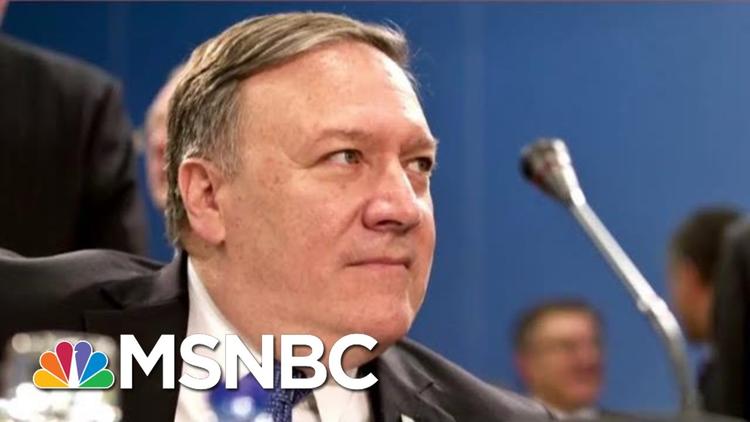 Ann Arbor (Informed Comment) – Secretary of State Mike Pompeo, a Kansas oil man in the back pocket of Koch Industries and a mealy-mouthed convert to High Trumpism, issued a shot across the bow of Congress on Tuesday. He sent a letter, which he also tweeted, in which he tried to take cover behind the professional diplomats of the State Department– the same professionals his administration has demeaned, sidelined and a third of whom it caused to resign or take early retirement.

The message of the letter is that he would defy, and order his department personnel to defy, the constitutional prerogative of Congress to exercise oversight over the executive branch. He sent it to Rep. Adam Schiff, chair of the House Intelligence Committee, who is subpoenaing witnesses inside the Trump administration to Trump’s notorious phone call with Ukraine president Volodymyr Zelensky in which he pressed the latter to investigate his Democratic rival Joe Biden.

Pompeo tweeted, “I’m concerned with aspects of the Committee’s request that can be understood only as an attempt to intimidate, bully, & treat improperly the distinguished professionals of the Department of State, including several career FSOs [Foreigh Service Officers].

Pompeo was asked about the call a couple of weeks ago, in which he dishonestly pretended to know nothing about it.

But it turns out that Pompeo himself was in on the call, according to the Wall Street Journal.

Report: Secretary Of State Mike Pompeo Was On The Ukraine Call | Deadline | MSNBC

Pompeo’s letter to Schiff indignantly defending the foreign service officers (not likely to be the ones subpoenaed) is the height of irony, since no one has persecuted the State Department more than Pompeo.

He was martinet-in-chief of the Republican House’s conspiracy in 2014-2016 to smear Hillary Clinton over the death of J. Christopher Stevens, the US ambassador to Libya, in the 2012 attack by Muslim radicals on the makeshift US consulate in Benghazi.

Then his big attack on Clinton consisted of a demand to know why she had not summarily fired any State Department personnel.

“POMPEO: Madam secretary . . . You talked about being disappointed, too, I’ve heard you use that several times. You were disappointed, you read the ARB [Accountability Review Board].

Why didn’t you fire someone? In Kansas, Madam Secretary, I get asked constantly, why has no one been held accountable? How come not a single person lost a single paycheck, connected to the fact that we had the first ambassador killed since 1979?

How come no one has been held accountable to date?

CLINTON: Well, Congressman, the Accountability Review Board pointed out several people working in the State Department, who they thought had not carried out their responsibilities adequately. But they said that they could not find a breach of duty. And…

CLINTON: The personnel rules and the laws that govern those decisions were followed very carefully.

CLINTON: I followed the law, Congressman. That was my responsibility.

CLINTON: It is my position that in the absence of finding dereliction or breach of duty, there could not be immediate action taken. But there was a process that was immediately instituted, and which led to decisions being made.

POMPEO: Yes, ma’am. The decision was to put these back in full back pay, keep them on as employees. That was the decision made as a result of the processes you put in place. I will tell you, the folks in Kansas don’t think that is accountability.”

And here are the videos of his incredibly dishonest and tacky performance:

CNN: “POMPEO TO CLINTON:WHY HAS NO ONE BEEN FIRED?”

It was through antics like the phony Benghazi conspiracy theory that Pompeo managed to succeed Hillary Clinton as secretary of state.

But it may be his turn to sit on the hot seat in front of a congressional inquiry.