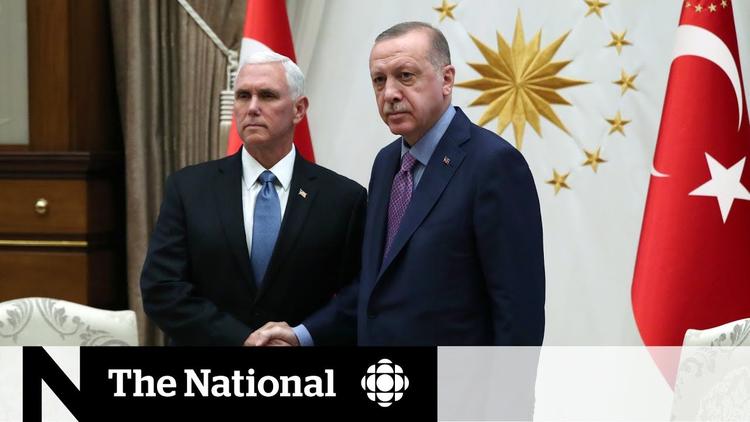 They added, “President Erdogan has given up nothing, and President Trump has given him everything,” the joint statement said. “The Turks have stated that ‘this is not a ceasefire,’ and made clear that they ‘will pause the operation for 120 hours in order for the terrorists to leave’ — referring to the courageous Kurdish fighters who have suffered nearly 11,000 casualties in our fight to defeat ISIS.”

Vice President Pence spent 9 hours hammering out the agreement, as Kaitlan Collins of CNN reports. But the end text did not require Turkey to commit to a ceasefire (it is a “pause” for only 5 days) or to pull back in any way. Instead, it requires the Kurdish-led Syrian Democratic Forces to withdraw from the Kurdish territory that Turkey invaded. In essence, the agreement gave Turkey bits of northern Syria for as long as Turkey wants them, and does nothing to redress the ethnic cleansing of perhaps 200,000 Kurds or Ankara’s plan to bring in Sunni Arab refugees from elsewhere in Syria to settle them in those homes permanently.

Trump also pledged that, given the “pause,” he would not follow through with plans to impose sanctions on Turkey.

Trump said at a rally in Dallas, Texas, that he was right to greenlight the Turkish invasion of the Kurdish region of Syria on the grounds that “sometimes you have to let them fight a little while.” He added, “Like two kids in a lot, you’ve got to let them fight and then you pull them apart.” The fighting, he said, “it was pretty vicious . . .It was nasty. . . . It’s not fun having bullets going all over the place.” But, he concluded, “Without a little tough love – you know what tough love is, right? – they would’ve never made this deal,”

Except that it isn’t a deal, it is Turkey getting everything it wanted and the Kurds being ethnically cleansed in their own home.

The juvenilization of adult peoples is an old colonial trick. After WW I, Syria was made into a French colony (“mandate”) on the grounds that it was a teenager and not adult enough yet to stand on its own two feet. Syria only got its independence in 1943 because France itself ended up being colonized by Germany and was too weak to fend off anti-colonial nationalists and the rival British.

Turks and Kurds are not children in the back of a car, Trump is the least likely adult in modern history, and giving away the show to Turkey is not “tough love” but a form of cowardice.

Former presidential envoy to the effort against ISIL, Brett McGurk, said it best:

This is an obscene and ignorant statement. 200k innocent people displaced. Hundreds dead. Credible reports of war crimes. ISIS prisoners escaping. US evacuating and bombing its own positions or handing them to Russia. Two kids in a lot? https://t.co/rMJVcvOmFI

Turkey’s invasion was provoked by anxieties that an autonomous Syrian Kurdish statelet right on its border would encourage separatist tendencies among the 20% of the Turkish population that is Kurdish. In addition, the Syrian Kurds have adopted a form of secular libertarian socialism or collectivism, which challenges private property, while the Turkey of president Tayyip Erdogan is all about Islam and real estate. Turkey has faced terrorism from the Turkish-Kurdish Kurdistan Workers Party militia, and charges that these are joint operations with the Syrian Kurds, but that allegation does not seem supported by any actual evidence. The Syrian Kurds have been too busy fighting ISIL to be active over the boarder in Turkey. Turkey, in contrast, has never shown more than token interest in seeing ISIL destroyed, being content to have it destabilize the Syrian government of Bashar al-Assad.

Still, PKK guerrillas may have used northeast Syria as a safe haven and place from which to launch operations in Turkey cannot be ruled out (though the same thing is true of the Kurdistan Regional Government in Iraq, where the PKK actually has a known base, unlike in Syria). Turkey has a right to expect security and the instability will only die down if arrangements can be made for that security. Unilateral invasions, ethnic cleansing, and population exchanges, however, are war crimes and are not the right way to achieve that goal.

One reason that Turkey accepted the American overture is that the Syrian Arab Army and its Russian ally are already taking territory in the north that Turkey had had its eye on, at the invitation of the Syrian Kurds. Thus, Russians are now patrolling Manbij and took over two abandoned American bases, blocking any advance of Turkish troops on that city.

Even in the northeast, it is not clear how much deeper Turkey could have gone into Syria without risking a military clash with Russia and its Syrian client.

Russian foreign minister Sergei Lavrov said Thursday that his country wants to see a situation created such that Turkey’s security is guaranteed and also that Syria regains sovereignty over its entire territory.

What Lavrov was hinting at was that ultimately the Syrian Arab Army should patrol the Syrian-Turkish border, guaranteeing that no terrorist attacks could be launched from Syria on Turkey, but also guaranteeing that the Turkish army leaves Syria entirely.

Lavrov said Russia would seek to find a resolution of the Kurdish issue through a framework of national unity via talks between the Syrian Kurds and Damascus. What he means is that the Baathist one-party state and its brutal army would reassert themselves in the Kurdish-majority northeast as a price for confronting Turkey about its campaign of ethnic cleansing against the Kurds.