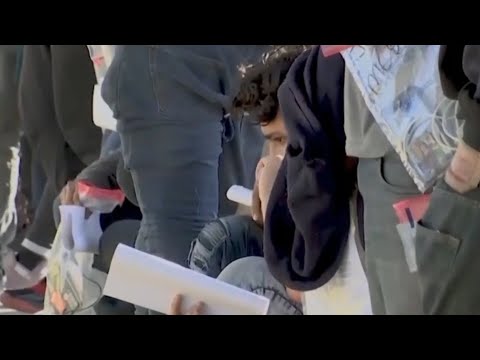 “There were many trails of tears all over North America of indigenous peoples who were forcibly removed by government forces.

The indigenous peoples who are making their way up from the southern hemisphere are a continuation of the Trail of Tears.”

(Informed Comment) – Children, families and caravans of brown-skinned people arriving at our border with Mexico have been labeled “swarms,” “hordes,” “masses” and “threats to our national security” – epithets that degrade those fleeing poverty, violence and now climate crisis in their countries.

Why are they here? In part, because our government has had a master hand in violently replacing democratic governments with right-wing dictatorships, which dispossessed the poor of human rights and land for much of the 20th and 21st centuries.

Why are they here now? Increasingly because they are driven from their land and livelihood by climate crises they have no role in causing.

Migration from Central American countries, specifically Guatemala, El Salvador and Honduras, to the US border grew during the years of 2007 to 2018, with higher numbers expected in 2019. A recent World Food Program study found that nearly half of those leaving their Central American countries leave due to lack of food – their subsistence and small farms having failed from prolonged drought.

These three countries – referred to as the Northern Triangle countries – are some of the most vulnerable to climate change. They are located in what is designated the Central American Dry Corridor where “hotspot” temperature increases, drought, and sea level rise are driving poor people from their homes, small businesses, subsistence farms and land.

For the rural poor and indigenous, losing their crops to drought two years consecutively causes immediate food insecurity and hunger, forcing them to migrate to cities, where rates of murder and rape are among the highest in the world – another factor driving them north.

Let’s look with the briefest of snapshots at the plight of the poor in these three countries to understand why they seek refugee status here.

In 1954 President Eisenhower ordered the overthrow of democratically elected President Jacobo Arbenz in order to protect United Fruit Company’s land interests. Arbenz had issued the Agrarian Reform Law, which redistributed land to some 500,000 landless indigenous peasants. One recent president we championed, Efrain Rios Montt, was convicted of genocide in 2013 for trying to eliminate Mayan peasants.

One in 10 Guatemalans is affected by hunger due to drought-related crop failures in 2018. Eighty percent of the coffee crop has been wiped out by coffee leaf rust in some regions, causing low-wage workers to lose jobs. All while two percent of the population control 70% of all cropland.

Over the last eight decades, US military support for right-wing coups and authoritarian candidates has strangled social movements for self-determination, worker rights and economic development in El Salvador.

In 2009 reform-minded President Manuel Zelaya, on the verge of signing land over to 300,000 small farmers, was kidnapped by the Honduran military and flown out of the country to Costa Rica. The Obama Administration supported the coup, and the Trump administration has continued to approve subsequent illegal presidents who have intimidated and violently suppressed rural and indigenous farmers’ land rights.

The country’s Pacific Coast, once a thriving tourist destination, is losing approximately 1 meter each year to sea level rise. Tidal surges are wiping out businesses, homes and roads. Further, the corporate shrimp industry is destroying mangrove forests protective of coastal erosion and needed for local fishing.

The US response to economically desperate migrants at our southern border is multi-sabered: demonize them, punish them by separating families, and discourage them by forcing long waits in Mexico while determining refugee status. Most recently Trump has cut humanitarian aid to Guatemala, El Salvador and Honduras while funding and training their border patrol police and military to weaponize their borders US-Style with US-made weapons and entrap those fleeing poverty, violence and climate crisis.